1905
Church of the Nazarene
Mozambique 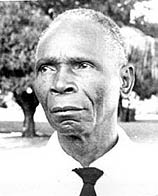 Miguel Mandlate and his wife were nonChristians when they were married. He was converted some time later but she was very hardened against the gospel. It seemed that the more progress he made spiritually the deeper she sank into traditional religion. He said she was a drunkard and persisted in making liquor in their homestead. He could have very easily given in to despair but he persevered in praying for her and living a Christian life. It all seemed to have no effect on her at all until one day she was wonderfully converted under the preaching of Rev. John Mazivila. From then on she was a changed person and she and her husband worked together for the Lord for many years.

About 1946 they were pastoring at Chicavane on the Njatigue Zone and Mandlate was the assistant to the superintendent of the district. Mandlate’s wife became ill and was taken to the government hospital in Manjacaze. After a few weeks, during which she did not respond to any treatment given, God revealed to her that He was going to take her to Heaven. So one day when the doctor came to see her she thanked him for all of his efforts but told him that she did not want any more medicine. When he asked the reason for this she told him that her Lord had shown her that He was going to take her Home to Himself. This sounded strange to the doctor who was a nominal Roman Catholic. She told him how the Lord had wonderfully saved her a few years previously. From that time on until the day she was translated she was a great blessing and a surprise to both the doctors and the nurses. Sometimes they would tremble as she told them what Jesus could do for them. At the last she bade farewell to her children and friends and the hospital attendants, but asked her husband and her pastor to remain with her to the end. She knew the hour of her departure.

At her funeral the nurses and other attendants asked to be allowed to carry her body to the cemetery. It was not far from the hospital. Many of them saw a Protestant funeral for the first time. It was the first time they had helped to lay to rest the body of one who had left such a glowing testimony of divine grace among them. Rev. C. S. Jenkins reported about it quoting John Wesley who said, “Our people die well.”[1]

Pastor Miguel Mandlate was ordained by Dr. Hardy Powers in 1950 and was an unassigned elder on the Vila de João Belo Zone that year. He became zone leader on the Mavengane District. Mr. Simion Mondlane told of Mandlate coming to pastor at Mabunganine in 1961. They appreciated his great zeal in working for the Lord and for the church. While he was there the church built a parsonage and a kitchen for him. From there Rev. Miguel Mandlate retired to his home at Dingane (Manjacaze).[2]