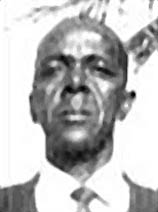 Rev. Samuel Hlambelane Macuyane Manhique began to follow the way of the Lord at the age of fifteen even though his parents did not want him to be a Christian. This happened at Chicumbane under Pastor Filimon Mundlovu. He thanked God that He sent a preacher to his area where the darkness was so great. He said he would never forget the great revival of 1928-29 that started at Njatigue when Rev. Gaza (Jenkins) was there and many Christians became truly established in the faith. The revival reached him and he testified, “I praise God for the Spirit of the Lord that lives in my heart.”

Two years later he went to work as a post boy in Mpfumo (Maputo) and continued there for nineteen years. There was no church and there were not many Christians. He was greatly helped by Prof. Vasco Mondlane and Mr. Mateus Mucavele Zeula who conducted a prayer meeting. In 1932 he was baptized at the Chipaja Church pastored by Pastor Isaka Mandlate.

Manhique met a beautiful girl, Raquelina (?-1993), from Muhetani who became his wife. The Lord blessed their home with four sons and five daughters. They went to pastor at Chipaja in 1949 and enrolled in Bible College at Tavane in 1954. [1] Missionary Miss Lorraine Schultz “Dez Para Oito (ten to eight)”[2] was the College Principal, in which capacity she continued until 1975. Manhique was ordained by Dr. Samuel Young in 1955.

Two professing Christians were travelling one day from Bukasha to the city. People smiled as their two cloth-wrapped bundles were loaded onto the roof of the bus. The two men were surprised to find Rev. Samuel Manhique already seated by the window. The bus lurched and the bundles above broke. Manhique was soaked in the liquid that streamed down through the open window. It was cashew fruit alcohol from a hidden still. The two humiliated men apologized profusely and said they had intended to raise money for their tithes and offerings to the church from the sale of the alcohol in the city. Manhique had no change of clothing with him so he still smelled strongly when he stood up to preach later that day. He did however have a powerful illustration for his message.[3]

Samuel Manhique and Pastor Aron Boca were conducting the childrens’ meetings during a revival campaign at Tavane held by Revs. Isaka Mandlate and Benjamin Langa in 1958. On Friday evening of the final weekend about one hundred boys and girls began praying, crying and praising the Lord and they would not stop. Samuel Manhique was God’s servant in bringing about this great revival. He was the main speaker in the children’s church held in the Casa Alegre classroom. He had preached about the sins of stealing and disobeying parents back at their homes. The children started praying fervently again on Saturday, June 7.

Three missionaries, Miss Mary Cooper, Mrs. Bessie Grose “Polisiman” and Miss Lorraine Schultz, went to visit them during that Sunday evening service in the classroom. Some of the children were standing on benches, some kneeling, others worshipping with uplifted hands. Some were singing, some loudly praising the Lord; others were quietly crying and praying. In the midst of this great sweep of blessing, there was a holy order and a sense of God’s unusual power. From Friday night on, the children had been going to parents and teachers confessing hidden wrongs. Their testimony was, “He has come!”

In the Bible College on Monday morning, June 9, about twenty-five had gathered for morning prayers. As Samuel Manhique and Aron Boca reported on the events of the previous evening in the children’s church, it seemed as though an electric shock struck and students fell to their knees. An eyewitness described it, “Here was another Pentecost; students stood and cried, praising the Lord, while others knelt in prayer. There was no evidence of wild fanaticism but a strange, deep surging of the Holy Spirit in our midst.”

Students, young men and women, husbands and wives, ran to kneel at the front of the classroom to weep and pray. Christians began walking around the room thanking God for this visitation. The noise was heard in nearby homes and fields and people ran to see what was happening. Those who dared enter joined the prayer while desks were pushed aside to make room for them.

Rev. Isaka Mandlate had his donkey tethered outside ready to depart for Chipaja and had come in just to say goodbye before leaving, but he did not leave until Thursday. Three hours passed and then at l:00 p.m. everyone marched to the church singing, “Oh, How I Love Jesus.” Outsiders began arriving and prayer continued unabated until 2:00 p.m. Then Rev. Noé Mainga dismissed the meeting and called for a service that evening. Christians scattered into the surrounding homesteads to announce that the meetings would continue.

The church was packed that evening and on Tuesday they moved to the tabernacle. There was little preaching and the revival continued until Wednesday night, June 11. Isaka Mandlate’s son, Simeão Mandlate, was wonderfully saved. “In all of it there was decent order and no manifestation of speaking in strange tongues.”[4]

Over the following five months there were similar outbreaks in local churches and youth meetings all over the country. Many young people were saved and sanctified and became preachers and leaders in the Mozambique Church in the testing years that lay ahead.[5] Manhique said, “I was greatly strengthened and supported in my faith through the power of that revival.” In 1998 Rev. Benjamin Langa said of this revival: “This constituted the second foundation of the Church of the Nazarene in Mozambique which we still remember today.”[6]

Rev. Samuel Manhique was ordained in 1958 by General Superintendent Samuel Young and became a zone leader on the Tavane (Northern) District. He was a great preacher.