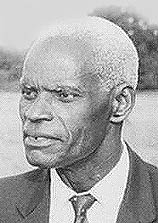 Elephants are forcing us to live in our gardens these days. They arrive early and eat our peanuts and maize. Strong Christians who have the Spirit of the Lord are like those monarchs of the forest. They are always early to meeting and are faithful tithers. Like elephants they keep together in large groups.

The wild pigs however do not come with the rest of the animals. They sneak in late when we have left our fields after chasing the elephants. Like some people they are always late. Like the wild pigs such people deceive, destroy and are unfaithful to the Lord and the church in many ways. [1]

Rev. João Zacarias Muchave used this illustration in a sermon in 1962. He was a great orator. [2] He was born at Chilatanhane near João Fumane where his father, Pastor Zacharias M. Muchave (dates unknown) pastored. Zacharias Muchave testified how he found the Lord through the ministry of a lady visiting from Switzerland. They called her “Manyawusani” because she warmed them with her fire. When he went forward to pray at the altar he really struggled but Rev. D. Muyanga and the other Christians prayed for him and helped him. He said, “Truly I found peace in my heart and Jesus still lives in my heart today… Since that time I have lived in the city of Jesus Christ where the enemy cannot come. He dies of bitter grief but he cannot enter that city.” [3]

His son João Muchave herded the goats and sheep until the age of ten. Professor James Mbanze taught him in school at Tavane, and Muchave became a Nazarene when the Methodist Mission there closed in 1930. He was converted during a revival held by Rev. John Mazivila at Tavane in 1932 and he attended Bible College there.

As a pastor Muchave started a school at Jongwe in 1949 and the local padre stopped him three months later. Protestant schools were not permitted. [4] He was an outstanding preacher and worked very closely with Missionary Mary Cooper in evangelistic work.

He once illustrated and acted out the need of the experience of entire sanctification in this way. One may sit uncomfortably on one buttock for a short while, but to be comfortable he needs the other one so he can sit on both together. [5]

Missionary Mary Cooper tells of a message she heard him give on John:14:6, “I am the way.” He explained about the path we all walk along. Many people do not respect it. They throw dirt on it and spit on it but the path does not grumble or complain. It is still there serving the people. Jesus is the Path. He accepts and redirects us sinners that are lost and caught in the wrong crooked bypaths. He continues to be the Path that leads to heaven and glory.

Muchave continued saying that trees growing along the path are also caught in the bad things that happen on it. They are cut, bent and destroyed but they do not complain. They give everyone that passes shade and fruit like God’s saints that stand close to Christ, the Way. [6]

He married Miss Neli Sithoie (1913-1981) in 1933. Her parents were N’wankava Sithoye and Hlekwasse Sumbani. She did not get on well in the home of her parents and she stayed in the home of Pastor Azarias Mavusso. Neli started in school at Tavane in 1931. She had a heart of courage and strength and was a faithful Christian showing peace and endurance and loved everybody. [7]

João Muchave was ordained in 1950 by General Superintendent Hardy Powers and became Superintendent of the Mavengane District (in southern Mozambique and the northern province of Gaza) in 1974. He was one of the leaders who carried on with the church during the Communist Revolution (1975-1981). In 1975 Missionaries Rev. Armand Doll and Rev. Hugh Friberg were imprisoned and the rest of the missionaries left the country.

Muchave was a tall, stately Christian gentleman with gray hair who used his bicycle or the bus to visit the thirty-nine churches on the district. Besides the problems of the revolution he ministered through times of severe drought and floods. He was one of Mozambique’s most outstanding district superintendents and was looked upon as one of the “patriarchs” of the Church of the Nazarene in Mozambique. Rev. Muchave retired in 1978. He passed away after suffering from heart trouble. [8]

The Muchaves’ daughter, Miss Lousada Muchave, was married to Rev. Jonas Mulate, son of Rev. Lot Mulate and grandson of Pastor Samuel Mulate. The Jonas Mulates pioneered the outreach of the Church of the Nazarene into the Northeast provinces of Mozambique during the early 1990s at the close of the civil war. They have seen phenomenal response and church growth.