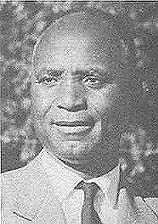 Luti (Lot) Mambambari Samuel Mulate is the son of the pioneer pastor Samuel Mulate. His name, meaning “staff,” refers to Aaron’s rod in the Old Testament. When he was still an infant his father came home and found charms around his neck given by a traditional doctor. His mother Abressa had called the doctor when Luti became ill. Samuel Mulate had them removed. He prayed and the child recovered. Soon after that Luti’s mother Abressa repented and found the Lord.

Luti gave his heart to the Lord when he was a lad of seven. He came to delight in prayer and Bible reading. Tears would come into his eyes when he testified. The boys in the community taunted him with the name “Little Minister.” Before he died, Samuel Mulate had requested that his son Luti go to live with the missionaries at the Rehoboth Bible College near Johannesburg. When he was twelve, the boy was able to go to Rehoboth.[1]

In 1924 Luti accompanied Rev. Jona Mahalayeye and the missionaries, Rev. David and Mrs. Maud Jones and family, on a trip to England. During boat drill on board ship they found the boy Luti weeping and praying, fearing that they were in great danger. He said that he had a piece of black and white checkered cloth in his box at home that was dedicated to the ancestral spirits. He had accepted it from his uncle so as not to offend him. He promised to burn it when he returned home.

After graduating from Bible College at Rehoboth (just north of Johannesburg), Lot (as he came to be called) attended Portuguese school at Tavane and then in Maputo. He married Miss Weceliya Cuamba in 1936 and they first pastored at Muhambi, near Chaimite. Lot was a real Christian gentleman and he assisted Jona Mahlayeye in district duties.

In 1952 Lot Mulate was the leader at Chaimite and became Superintendent of the Limpopo District in the Church of the Nazarene. He always set a good example for believers and steeped himself in the Scriptures. Everyone honored and respected him as one of the true leaders in the church. At the age of sixty-five he retired.[2]

Mrs. Weceliya Mulate (1916-1981) was born at Nguazani, Chibuto. Her father was Mitine Micas Cuamba and her mother Mulidose Sitoe. She supported her husband, Lot Mulate, faithfully everywhere he went. Becoming ill in 1973, she gradually became paralyzed. At her death she left eleven children and eighteen grandchildren.

On 20 December 1959 the eight-year-old son of the Mulates, Esabelani Lot, died at Chucumbane. Although young he was a mature Christian. He would comfort his parents when he saw them crying, telling them to be at peace as Jesus had said in John 14:27, “Do not let your hearts be troubled and do not be afraid.” He would pray, “Lord, if you wish to heal me according to your will, I will serve you. But if the time has come it is according to your will.”

His home village Bileni was scattered by war and he went to reside with their son, Rev. Jonas Mulate at Maputo.[3] He was a faithful man of the Lord and was the last of the pioneer elders in Mozambique to die. [4]