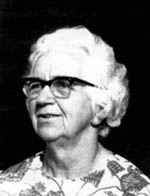 Gladys Mary (McDougall) Pope was a pioneer missionary in Tete, Mozambique. Her maternal grandfather was A. W. Baker. He was a descendent of the 1820 settlers and spoke Zulu fluently. He was a brilliant lawyer who at one time served President Paul Kruger. He gave up his career to begin a work of evangelization in the gold mines. On every occasion, he was driven to seek the lost. Many were blessed by the testimony of Gladys’ mother as well.

Gladys’ father was Lauchlan Archibald McDougall. He grew up in Australia and hardly went to school but spent long months away from home alone herding sheep and studying as best he could. He was wonderfully saved alone under a tree miles away from anyone but God, and he carried a fierce passion for souls all of his life.

He came to South Africa in 1901 at the invitation of A. W. Baker to be a missionary in the interdenominational Compounds and Inland Mission. McDougall walked or rode on horseback for many miles through Portuguese East Africa (Mozambique), Natal and the Transvaal preaching the gospel and was known everywhere as Maduk. The mission disbanded in 1920 but he continued mission work independently. He worked days and spent evenings and weekends evangelizing in the mine compounds, prisons, and hospitals on the Rand and led many to an experience of salvation. Gladys says that he was such a humble man and a wonderful father to his twelve children. They all followed the Lord. His daughter Gladys continues, “He showed them all he knew or did, letting us learn and experiment–mending shoes, cutting glass, putting in a window, painting a wall, laying bricks, milking a cow, developing and printing photos–perfection was always his aim ‘as unto the Lord.’”

Gladys was born at Chieveley, Natal, on the Rama Mission Station, on May 16, 1909, the third in the family. They lived in the Crown Mines mission home in Johannesburg for ten years. In 1920 the McDougalls moved to the Malvern suburb of Johannesburg and, in 1925, Gladys was the first in her family to graduate from Jeppe High School. She then studied typing, shorthand and bookkeeping at night school while managing a small grocery business during the day. There was no money for her to continue her studies.

Gladys testifies: “From our very babyhood we loved our dear Saviour, we honoured God’s Word, we revered the time of prayer, and at the age of five I made my covenant to the dear Lord to be His. Right and wrong were clearly taught, yet we were never compelled, and as we grew older, we chose right. I was later sanctified through light brought by Rev. Hodgin.”

In the 1920s and 1930s period monthly meetings were held in the various missionary homes on the Reef for prayer, fellowship, and discussion. It was often held in the McDougall home where she met Henry Pope who became her husband. Henry had been given the Zulu name Amadolo ayinzima (Heavy knees). He always knelt to pray, kneeling with a thud on the wooden floors of the small churches built along the Reef.

George Henry Pope (1903-1985) was born in Manchester, England. As a young christian he felt God’s call to the ministry and studied at Emmanuel Missisonary Training College at Birkenhead. Henry responded to a call by the International Holiness Mission (IHM) to go to Africa. Henry and Gladys were married on August 17, 1932.

Their first home was at Cottondale, Eastern Transvaal (now Northern Province) where missionary Doris Brown carried on a dispensary. The Popes rode their bicycles extensively around the district visiting and preaching. Gladys remembers cycling down the railway track seventeen miles to Merry Pebble Stream with her husband and missionary Harry White. She describes it, “We enjoyed sweet fellowship with a group of African members and experienced our first night living in an African homestead. The long uphill ride back next day was exhausting, but how we loved it!” Sometimes lions made it dangerous to walk or cycle between the mission homes at night. Both Henry and Gladys experienced bad bouts of malaria fever and they were advised to go to Johannesburg for the birth of their first baby, Ruth. Later they fixed a carrier on the front of the bicycle and thus carried her everywhere with them.

After eighteen months at Cottondale they were asked to go to the Tete area of northwestern Mozambique to assist the missionaries Rev. Henry Charles and Mrs. Lucy Best. By this time Henry Pope had become a naturalized South African citizen. So with their South African passport they quickly obtained visas for Portuguese East Africa. In August 1934 they took the train with four month old baby Ruth from Johannesburg to Salisbury, Southern Rhodesia (now Harare, Zimbabwe) bound for Furancungo, eleven hundred miles to the north. They had arranged for a transport manager, Mr. T. Page, to take their things.

The town of Tete was ninety-three miles from the Furancungo mission station in the Macanga District. The road crossed the Zambezi River and then climbed from 300 feet to 4,200 feet. Henry explains that the road “has to be experienced to be understood.” En route Henry noticed that a back spring of the truck was partially broken and Mr. Page had to replace it with the help of his African helpers. The Popes were very glad to get settled into a large house with a grass roof and mud floors, and grass walls mudded inside. They made their furniture out of gasoline and kerosene boxes and set about learning two languages, Nyanja (Chewa) and Portuguese, without teachers. They were eleven miles from Furancungo Boma (Portuguese district centre) where there was one Portuguese store and only one English-speaking white couple. They did not have a vehicle and Henry visited and evangelized on bicycle.[1]

The Furancungo Mission in Tete Province of Mozambique was located in a high healthy area in the mountains. But one had to traverse a band of tsetse fly country to reach it. Mail came through to the Boma once a week carried on foot or, if the policeman was lucky, with the help of a stray motorist. When the heavy tropical rains came (and it could rain there in torrents for hours on end), neither foot carrier nor motor vehicle could get through. One year there was no mail (and no newspaper) over Christmas for six weeks. They were completely isolated and no emergency could alter that. There was no telephone or radio in those days either.

There were no cows at Furancungo Mission. Rev. Best had fourteen head of Madagascar cattle which the lions had finished off one by one. They were able, however, to obtain goat’s milk from their African neighbours. They had no refrigerator. To build they hired men to go to the forest to cut trees to make their own planks for doors and windows. They made their brick kiln and fired their brick. The nearest proper hospital was at Madzi Moyo in Northern Rhodesia (Zambia), at a Dutch Reformed Mission Station, 165 miles to the north. Their baby boy, Albert, was born there as well as their three other children, Joy, Betty and Muriel. Part of the time they had no car, only a bicycle. For ten years the Bests were also at Furancungo and the Popes learned much from them about how to live in that lonely place. After that the Popes had ten years there as the only missionaries.

The Lord blessed the church at Furancungo Mission and district. At that time the IHM was the first and only Protestant mission the Portuguese government allowed to operate in that province. In 1952 the IHM fused with the Church of the Nazarene. The work of the church had progressed slowly but steadily. The gospel was preached on Sundays, at early morning prayers and in mid-week services. There were regular services in the homesteads around the mission. The day school and clinic helped the growth of the church. There were treks to Chiritsi, Chitiri and Chiuto during the dry season. There were calls for them to visit beyond the Boma near to the border of Nyasaland (Malawi) which they could not respond to due to restrictions by the authorities. Bibles and Scripture portions in Portuguese were distributed to those who could read.

They periodically made trips to the lower plains where the majority of the people lived. Gladys describes them:

A group of nine or so carriers would be employed to carry our food supplies, pots, bedding, clothing, perhaps a tent and even our children “piggy-back”…. We would often sleep in an African hut… our camp stretchers raised us up slightly from the floor. I well remember rats running across the foot of our beds…. We were always very tired the first night out, and our feet were often sore with blisters. Descending most of the five-hour walk, slipping and sliding on fallen leaves in the gutterlike pathways, or rolling on pebbles, was heavy going…. I remember one trek being away from the mission for twenty-two days. Our European-type food had long run out, and we were enjoying proper African food. Our clothing had taken on the grey-black hue of the soil of that region. Henry’s dental forceps were in constant demand, and our Red Cross box was freely used…. One stretch of our route was reputed to be a part of the old slave trade route. Did Livingstone see those sad sights of chained slaves on this road and tell the gospel story of redemption back then? Each night we slept in a new place, and held as many gatherings as we could fit in. There were some scattered believers and we were there to help them and to encourage them to greater efforts to win others.

Gladys used what medical skills she had to help the sick people and Henry pulled teeth. There was an outbreak of dysentery amongst the women whom the administrator had gathered to do the weeding at the airfield and around the Boma buildings. As there was no doctor the women were sent home. Some came to the mission and a place was made available where they could be isolated and where Gladys could take care of them. Little Albert was almost eighteen months old and crawling everywhere. They surmised that he contracted the disease by cuddling into Gladys’ apron before she could change it and wash her hands again. Henry tells about it, “He was gone in one week. I made the coffin, and now there is a little grave in front of the church at Furancungo Mission along with some others of Pastor Chibanga Phiri’s family awaiting the trumpet call - Até que Venha (Until He Comes).”

Henry continues the story: “Of course, work at Tete meant separation from our children so that they could go to school. God was so very good to us in that dear ‘Granny Mac’ (Gladys’ mother) lived in Johannesburg and was so glad to help us in this matter.” The children could not even come home during the school holidays. The family did have a furlough to England in 1946. Henry’s father had passed away and his mother was alone. In 1954 the Popes were relieved at Furancungo by Rev. Norman and Mrs. Joan Salmons. After that the Popes served in the Transvaal and eswatini at various places.

In 1970 they retired at Scottburgh on the South Coast of KwaZulu/Natal to become caretakers over some properties. Here they continued to serve the Lord in every way that they could. Henry went to be with Jesus at the age of eighty-two. He had lived in daily expectation of the Lord’s call. He was remembered as an example of the faith. His prayer support, loving interest and cheerful nature was missed by his family.[2] Gladys went to be with Jesus at the age of eighty-nine and her family rejoiced with those in Heaven that she had faithfully run the race and had left a rich heritage.[3]