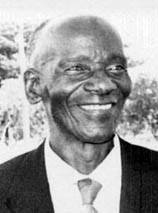 Rev. Paulo Mizini Themba Siweia was one of the pioneers of the Church of the Nazarene in Mozambique.

One of his ancestors, Sifunda, named his son Sikupukiye or Siwela, referring to the rivers, such as the Inkomati, which they had crossed travelling from Zululand. A son of Siwela was Mawelele who became a chief and gave his name to that locality. Shimburunja, a son of Mawelele and grandson of Siwela, was with the army of Soshangane in its conquests after fleeing from the tyranny of the Zulu Emperor, Chaka. A great-grandson of Shimburunja was Phambane (which means “separation”), referring to the separation between King Muzila of the Gaza Empire and his brother Mavewe.

Paulo’s mother was a great aunt of Dr. Edwardo Mondlane, founder of the Frelimo Movement in 1962. In 1907 Paulo and his mother accepted Christianity in South Africa under the ministry of Rev. Bucher. Then, in 1922, Paulo Siweia became a Nazarene when the church at his home in Mozambique was put under the administration of the Church of the Nazarene.

His wife Rosita ‘Nyamun’wani (Sitoie) Siweia was from the Chiwumbane Church at Mussengui, Manjacaze, pastored by Rev. Samuel Mulate. A letter from a relative, Jesse Sitoie, writing from his work on the mines in Joni (Johannesburg), encouraged her to begin attending church so that she could go to the school classes in the evenings. In order to preserve their traditions, parents generally forbade girls to attend school to learn Portuguese. Rosita joined the church of Rev. Isaac Lehman at Jatigue and was a leader among the girls. The church had the girls wear dresses rather than traditional garb which was considered immodest. Also they were required to remove traditional bangles and necklaces. Rosita became engaged to Paulo Siweia when he made his second trip to the mines in Johannesburg to work.

The Siweias were married according to traditional custom. In the church all communication between courting couples had to be through the pastors and this made it very difficult for young people to be married in the church. Their first son, Moises Paulo Siweia was born in 1924. However Paulo and Rosita were the first couple to be married in the proper Christian manner by Rev. “Gaza” Jenkins at Jatigue in 1926. Paulo and Rosita Siweia found spiritual help and were leaders in the great revivals of the 1920s. During those revivals Siweia was a prominent leader at Fujuca, Macuacua. After that Siweia became an assistant to Pastor Mulate. He was later the leader of the Alto Chengane zone on the Manjacaze district.

The family moved from Chiwumbane, in the Chibuto region to the Manjacaze District in 1925 when Siweia was assigned to pastor in the Fujuca area. At first Rosita was not allowed to accompany him as it was in the Macuacua region, in the bush among many wild animals including lions, leopards and elephants. Their son, Moises Paulo, tells of how once at sundown he and his young friends were chased by lions, and the cattle they were herding was scattered. They saw hippos in the daytime and hyenas killed the goats at night. People there were in great spiritual darkness. Sorcery and drunkenness were rampant.

They found Mr. Lazaro Sitoe there along with many other worshippers. The congregation began visiting with the people and inviting them to the church services. New congregations were started at Cuaie and Chengane. People traveled on donkey back often across dangerous rivers in flood. Missionary Miss Mary Cooper, Mihlotini (“in tears”)[1], visited them to hold revival meetings and to help them build a church building. She rode in a cart driven by Mr. Dias Mucavele. Siweia carried on the Lord’s work energetically and with humility. He attributed his success in winning people for the Lord to faith in God and because of his commitment to, and being baptized with, the Holy Spirit.[2]

We appreciated the white missionaries because they showed us the truth. They encouraged us in resisting nonChristian traditional customs…. We had not heard of sanctification, but only about repentance and leaving the things of darkness. Preachers from Jatigue preached of removing the roots of the old man from the heart. The great holiness revival of 1928 came to us in a week of prayer. We rejoiced greatly. It was like on the day of Pentecost. Thank God today for that! Miss Estere Guiva was greatly helped at that time. I want to die in the Lord even though I may meet with many difficulties.

The Siweia children studied as far as they could in the rural schools and then went to Maputo to continue their schooling. Paulo Siweia was ordained by Dr. J. G. Morrison in 1939 along with pastors John Mazivila, Zephania Mhula, and Daniel Muyanga, all from Mozambique.

Rev. Paulo Siweia passed away suddenly and unexpectedly in 1968 at Fujuca. There were 280 people at the funeral including pastors and elders of the church and chiefs of the region. Rev. Joao Muchave officiated and, referring to Job 1:8, said that like Job, Siweia was “Blameless and upright, a man who fears God and shuns evil.” Professor Vicente Mbanze referred to Siweia’s words in the closing exercises at Tavane Bible College just a week previously: “‘Mudidimela (Muhota) lo’wu tshiveliweke hi tihunyi ta nyenge (n’wenge)….The gospel kindled by the Holy Spirit and prayer cannot be extinguished here on earth.’ He was showing that the gospel came with difficulty to this land. The first preachers did not soften the message in spite of great opposition. They longed to see the gospel firmly planted in Mozambique and were often on their knees praying. Everything we have in the Church of the Nazarene here today comes from their tears and zeal.”[3]

Missionary Rev. Charles Jenkins said of Paulo Siweia in 1955, when he attended a meeting at Tavane where Paul Siweia was the chairman, “We have watched him down the years. What a monument of grace!”[4]

The Siweia family established themselves in Maputo because of the effects of the civil wars in their home area.

The grandson of Paulo and Rosita Siweia, Dr. Paulo Moises Siweia became superintendent of the Maputo/Matola District and was for a time also principal of the Theological College in Maputo. In 2003 he was appointed director of the Lusophone Field (which includes all of the Portuguese speaking countries) on the Africa Region.