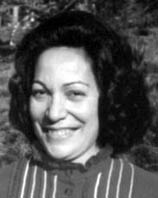 Rosa (dos Santos) Steenkamp was born into a strict Roman Catholic home in the village of Igreja Nova in Portugal. As a girl she was once shocked when a priest asked her suggestive and embarrassing questions. After that, she never again went to confession.

At the age of sixteen she emigrated to Mozambique and lived with her sister in Lourenço Marques (Maputo). When she was twenty-one she married. Friends of her husband belonged to the Church of the Nazarene in the city. They invited her to join them at church during the week preceding Easter.

The second time she went she found the Lord. She explained, “I went forward to the altar. I confessed my sins and accepted Jesus as my personal Saviour. My life was completely changed, and my only desire is to serve and please God.” Her husband was also converted and they joined the church.

Four years later in 1964 they visited Portugal. Her parents accepted her conversion. Soon after that her husband asked for a legal separation and began to mistreat and hit her. He finally left her on New Year’s Day 1970. She worked night shift at the telephone exchange and had another daytime job. A kind operator named Mr. Neil Steenkamp in Durban, Natal, began to help her learn English during their telephone conversations.

They began corresponding. He was Afrikaans and also spoke English but knew no Portuguese. She knew no Afrikaans and was just beginning to learn a little English. When she visited him in Durban he looked for a Nazarene church and took her to the Morningside Church pastored by Rev. John Marks. After that Neil continued to attend there.

One weekend when he visited Rosa in Maputo they went to a small Church of the Nazarene in Villa Salazar and that day he found the Lord. Rosa left Mozambique just as the revolution was imminent and it was becoming dangerous to stay in Maputo. They were married in November 1974.

Those were happy days. In 1975 she asked her friend, Fernanda, in Maputo to visit the imprisoned Nazarene missionaries, Rev. Armand Doll and Rev. Hugh Friberg. Fernanda was able to relay telephone messages between the prisoners and their wives, Pauline Doll and Evelyn Friberg, who were in Johannesburg or the U.S.A. Rosa’s parents came out from Portugal to visit in November 1976 and found the Lord through the ministry of the Nazarene pastor and wife, Rev. Ian and Mrs. Marilyn Croudace.

Rosa began to be anemic, weak and dizzy. Finally in May 1978 it was found that she had acute myeloblastic leukemia. She believed God could heal her and many were praying for her. Pastor Croudace felt the assurance that God would touch her body. During her first two days at the Addington Hospital in Durban, she felt a strong urge to visit other leukemia patients. In spite of her weakness she made a great effort and witnessed for the Lord to several ladies and prayed with them. Neil’s family had become estranged from them after their wedding and Rosa and her younger sister had not spoken to each other for seven years. Rosa took the initiative in both instances and brought about reconciliation with Neil’s family as well as with her sister.

Although she had sought entire sanctification, Rosa had never had the assurance of this experience. As she prayed now, God showed her that she and Neil had been failing to pay their full tithe. She shared Malachi chapter three with Neil and they praised the Lord as they both determined to obey Him. Rosa at last received the full assurance of sanctification and her only prayer was, “Lord, make me a blessing.”

The treatment she received for her illness seemed only to make her worse. Finally the specialist told Neil that there was nothing more that they could do as her body was rejecting all treatment. He said that Rosa had only two or three more weeks to live. When Neil told Rosa she replied, “Never mind. For the Lord nothing is impossible. Until the last moment He can still multiply the days of my life!” Two weeks later after repeated blood tests she was pronounced free of leukemia. The hospital staff were amazed. She continued with treatment in and out of the hospital for months, and in March, 1979, the results of her bone marrow tests were negative.

In September 1980, her pastor, Rev. David Holmes, asked her to be president of the missionary society. She served enthusiastically. All treatments were discontinued in March 1982 and she felt fine. Their doctor, Dr, Rhodes, advised them that following her chemotherapy the heart muscle could be severely weakened and that it would be dangerous for Rosa to become pregnant.

Rosa trustingly decided to leave that in the Lord’s hands. Later that year, they visited the U.S.A. and Portugal. Then another miracle happened. After all their years of marriage, Rosa became pregnant. On August 23, 1983, Cornelius (Niki) was born by caesarean section. The child was normal and healthy. This miraculous story was carried by most of the major newspapers throughout South Africa.

Apparently however, Rosa’s poor heart condition was not recognized in time for successful treatment. She grew steadily weaker and died of congestive cardiac failure. She passed away on August 31.[1] Her death was unexpected and sudden. Neil wrote:

On September 2, two days after Rosa’s death, I felt that God was distant and unconcerned, but as I took my devotional book, “Living Light,” the Lord really spoke to me. If someone had poured an ice cold bucket of water over my head, I could not have had a bigger shock. I have heard in my Christian walk with the Lord how He had spoken to many people, but this was the first time the Lord had spoken to me in such a direct way. I had to read the page one more time to understand what the Lord was telling me. I felt perfectly at peace when I got up from my knees, and I praised God that I could have had such a privilege to have been Rosa’s husband. Because of her life, I know the Lord as my Saviour.

I have also learned to trust God when I cannot understand. I know I will have no complete answer to the “why,” yet I can rejoice by faith, knowing that He knows and that in ALL things, “God works for the good of those who love him” (Romans 8:28). Also in John 13:7, “You do not realize now what I am doing, but later you will understand.” I do not fully understand, but rest in the fact that He makes no mistakes.

Rosa’s life had quality and by that I mean she has left her mark in this world, in my life, as well as in the lives of many others. Her preaching ministry to the leukemia patients in the hospital showed her concern for their spiritual lives. I praise God today for the many which accepted the Lord through her love and concern for them….Rosa’s life was such that she kept “short accounts” with God. She was prompt to confess any wrong she had done to the Lord and others. In our marriage we followed the same principle. Problems and differences did arise, but we dealt with them immediately so that there would be no barrier in our fellowship with the Lord or with each other. When Rosa was taken from me, nothing was left undone. I do not have to live with “if only…“[2]

Mr. David and Mrs. Yvonne Graham of the Morningside Church undertook to care for Niki until Neil could care for him. Yvonne was the daughter of Nazarene missionaries, Rev. Reginald and Mrs. Lillian Jones. Later Mr. Neil Steenkamp married a former Nazarene missionary nurse, Miss Meryl Hilary Pattrick, from the South African District. They were members at the Horison Church near Johannesburg and Niki was growing up in their home together with his little sister Luanne (1995).