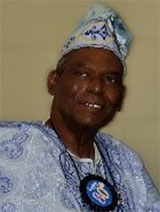 Caleb Oyelayo Adeogun, pastor, teacher, evangelist, and church administrator, was born on November 25, 1932, at Oke-Bola in Ibadan, Oyo State, Nigeria. [1] He was the first of six children of a pioneering Seventh-day Adventist convert and pastor, Joseph Adeyemo Adeogun and Comfort Wuraola Adeogun, the daughter of Pastor James Abiola Ojo, an earlier convert to Adventism. [2] Caleb moved around frequently as a child because his father’s work as an evangelical Seventh-day Adventist pastor required him to be constantly transferred from one town to the other. In his first seven years, he lived in Ibadan, Owobale, Omu Aran, and Otun-Ekiti (western Nigeria). The above incessant movements, coupled with a strong passion for Adventist education, motivated Pastor and Mrs. Joseph Adeyemo Adeogun to send young Caleb back to Ibadan in 1939 to live with Pastor and Mrs. William McClement, Irish Missionaries at Oke-Bola in Ibadan. [3]

Caleb’s formal education started at St. James Anglican Primary School, and he later transferred to the Adventist Primary School, Oke-Bola, Ibadan, after it was established. He also attended the Adventist Teacher Training College Ihie, Imo State (eastern region). Caleb received the Teacher’s Elementary Certificate in 1951 and the Grade Two Teachers’ Certificate in 1956. He then got a Bachelor of Arts degree in education from the University of Ibadan in 1963 and a Master’s in Education from Andrews University, Berrien Springs, Michigan, in 1975. [4] He married Elizabeth Adunola Ordia on July 9, 1967, in Ibadan, Nigeria. Their marriage was blessed with six children: Moyosore (b.1960), Olugbenga (b.1968), Ayotunde (b.1972), Oyinkansola (b.1973), Abiola (b.1977), and Olubukola (b.1979). [5]

Adeogun served the Seventh-day Adventist church with dedication all his life and held different positions in denominational service. He began his teaching career in 1947 at Oke-Bola Seventh-day Adventist Primary School. The following year, he was called to work at the Seventh-day Adventist Primary School, Otun Ekiti, under the headship of Pastor D. T. Agboola. He spent only a year there. From 1963 to 1969, he taught at the Adventist Grammar School (AGS), Ede, Osun State (western Nigeria) with Agboola, Elder Enoch Dare, and Mr. Boram, who was at the time Principal of AGS. Agboola, commenting on his sweet memory of the years he spent and worked at AGS, said, “I should mention that we both (Pastor D. T. Agboola and Pastor Caleb O. Adeogun) did our best to help late Brother Boram to build the school the best we could and did the same when Brother Enoch Dare became the Principal too.” [6]

From 1969 to 1976, Adeogun taught and served as the registrar and acting principal of the Adventist College of West Africa (ACWA, now Babcock University). He worked tirelessly alongside other staff and faculty to build the school’s enrollment and to transform it into the premier Adventist institution of learning that it is today. In his own words, “We worked together with others in keeping the institution (ACWA) as best as we could.” He was a mentor to many students and workers while at ACWA. He made himself available for private and free tutorials in English. To prevent the government of the western region from taking over the school, it was converted into a seminary and renamed the Adventist Seminary of West Africa (ASWA) in 1975. He was ordained into the gospel ministry in February 1977 in Benin City, Edo State (Bendel). [7]

In addition to being a teacher, Adeogun was also an accomplished pianist. While he was living with the McClements, he painstakingly learned the piano and organ and enjoyed playing them. As a musician, he was a member of several singing groups and quartets. He delighted in conducting choirs. Pastor C. D. Henry, an American missionary based in Liberia at the time, came to conduct public evangelism at Yaba in 1958. About the sacrificial spirit of Adeogun, Pastor Henry said, “Mr. Caleb, though the Principal of our Lagos elementary school and studying for an external examination, sacrificed time needed for study and preparation to be our loyal interpreter and musician.” [8]

Adeogun became the first Nigerian to be elected the Executive Secretary (1976) and President (1984) of the Nigeria Union Mission of the Seventh-day Adventist Church, Maryland, Lagos. During his eight years as the Secretary of the Nigeria Union Mission, he made evangelism his passion. In addition, he organized several seminars for local church clerks and secretaries, during which period record keeping of church activities became mandatory throughout the union field. He traveled to every zone in Nigeria to make them aware of the gospel commission and the soon return of the Lord. Throughout his meritorious services both as the Secretary and as the President, Adeogun demonstrated his passion for souls. He also showed his frugality by avoiding wasteful spending of church funds. His fellow officers attested that Adeogun’s life was above reproach. According to Prof. David Babalola, Adeogun “detested favoritism, politics, nepotism, and tribal gimmicks in all forms.” [9] He was known as the policy man. He upheld the integrity of church policy and he was quoted to have said, “If you want to have fruitful and blessed ministry you must abide with the policies of the church, otherwise the policy will throw you out.” [10] In 1990, he became the first African to serve as Executive Secretary of the African-Indian Ocean Division of the Seventh-day Adventist Church in Abidjan, Cote d’Ivoire. He played an active role in ensuring that all missionaries in the Central African countries of Rwanda and Burundi were safely evacuated during the genocide of 1994. He remained at the Division until his retirement in August 2000. [11]

After retirement, Adeogun moved back to Inisa, his hometown in Osun State, but remained active, serving as the Administrator of the Adventist Medical Centre in Inisha and as a member of the board of directors of the Inisa Community Health Center. He invested his energy in the growth of the town and led the effort to found a new elementary and secondary school to improve the educational opportunities of the local children. He also continued to hold evangelistic efforts in the towns around Inisa. Due to his declining health, Adeogun and his wife Elizabeth moved to Dallas, Texas, to live closer to their children and grandchildren, but continued to visit Inisa regularly. [12] Adeogun passed to his rest in the early hours of December 2, 2016, after a prolonged illness. [13]

This biography, received in 2020, was written by Margaret Olufunke Adeogun, PhD, Professor of Library Science and Head of Patron Services and Marketing at the James White Library at Andrews University, Berrien Springs, Michigan, USA. She is the sister-in-law of Caleb Oyelayo Adeogun. She wrote this biography with contributions from Adeogun’s son, Caleb Olugbenga Adeogun, Jr.