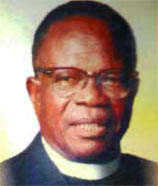 Zacchaeus Abere-Ona Alabi was from the Yoruba tribe of southwestern Nigeria. He was born into a royal family in the Ayegunle Gbede area of the old Kabba Province in the present Kogi State of Nigeria. Abere-Ona (his popular naïve name) was born on April 24, 1927 into the royal family of Alaherin (the reigning king of Ayegunle Gbede at the time). His parents, Mr. and Mrs. Alabi, were Muslims, belonging to a prominent Muslim family in Gbede and its environs. As it was customary of staunch Muslim parents, Abere-Ona was enrolled in the Quranic School at a very tender age with the vision that he might become a leading Muslim scholar in life and carry on in the faith of his father.

Divine destiny however prevailed over the dream and vision of his parents as Abere-Ona was converted to Christianity through his contact with Western Christian education. As his father wanted the best for him in life, apart from enrolling him in the Quranic School, he was selected among the other children in the family to have a taste of Western education; little did his father know that this step would link his son with the Christian faith to fulfill his divine mission on earth. As there was no other public school than the one owned by a Christian Mission school, his parents were forced to enroll him at Baptist Day School, in addition to his earlier enrollment in a Quranic school. By policy, the mission schools required attendance at church services and other related Christian programs for all students, irrespective of religious affiliation. Through these programs, Abere-Ona gradually became acquainted with Christian teachings, especially the salvific work of Christ. To the consternation of his family members, Abere-Ona willingly decided to accept Jesus Christ as his personal Lord and Savior, and began living a devoted Christian life. At baptism, he was given the Christian name Zacchaeus.

When Abere-Ona embraced Christianity, this was so strange, shocking, and demoralizing to his father that, as a punitive measure, to discourage him from continuing in the Christian faith, his father decided to stop paying his school fees. The experience was very frustrating for the young Zacchaeus in his Christian journey. However, he remained steadfast in his newfound faith. He eventually came into contact with a Christian man who decided to adopt him and thereby provided him with sponsorship to enable him to complete his basic education. This new link eventually took him from Kabba-land to Abeokuta (the capital city of the present Ogun State of Nigeria) where he re-registered and completed his First Leaving Certificate in 1948. He thereafter attended P&T Training School, Kabba. After completion, he was given a job as postmaster.

As Zacchaeus Abere-Ona Alabi continued to grow in the faith, he met a Christian lady by the name of Elizabeth Idowu Olumorin. After eight years of Christian courtship, they were married on December 20, 1959 at the Apostolic Church. The marriage was blessed with godly children and grandchildren.

At the end of his basic education Alabi joined the Apostolic Church, the leading Classical Pentecostal denomination in Nigeria with its general headquarters in the United Kingdom. He allegedly received a call into the full-time ministry of the same church in 1950.

Thereupon, he was enrolled for a one-year ministerial training program at the Apostolic Church Bible Training School, Effo-Amuro, Kabba Province, under the headship of Pastor K. P. Titus. When he finished this, he was commissioned as a minister and immediately began his official ministry. As a lover of education, in 1952, he went to the major seminary of the church, the Apostolic Church Bible College, Ilesa (now the Apostolic Church Theological Seminary, affiliated with the University of Ibadan) for further study. He returned a year later (1953) to his duty post at Effo-Amuro. Thereafter he worked in Egbe and its environs.

In 1955, he was transferred to Lagos. He was posted to the Apostolic Church Bible School, Ikeja as an instructor. As a young and well gifted pastor in the teaching ministry, he was nicknamed “Young Scoffield” by Pastor S. G. Adegboyega (the first LAWNA [acronym for “Lagos, Western and Northern Areas”] territorial chairman of the church).

In 1956, as a need arose, he was sent on transfer to the Muslim dominated city of Kano (in northern Nigeria) to attend to the re-planting of the Apostolic Church in that land where the former assembly pastor had formed a new church from what was then the existing branch of the church. On arrival, Alabi had to start a new assembly at a new member’s house. Interestingly, from this assembly he pioneered several assemblies in this Muslim dominated area of the country. Today, that new assembly later assumed an area headquarters status (the equivalent of a diocesan headquarters in the mainline churches) – The Apostolic Church, Kano Area, with 10, Emir Road, Kano as its permanent site.

In 1962, after barely six years of labor in Kano, Alabi, with the approval of the church authorities in Nigeria, went to the Apostolic Church Bible College, Swansea, Wales, in the United Kingdom (the major theological institution of that denomination, worldwide) for a degree program. There he received a bachelor of theology (B.Th) degree. On his return to the country in 1963, as a great asset to the church, he was immediately posted to the Apostolic Church Bible School, Ikeja, Lagos, as the school principal.

In August of 1963 (the same year he returned from further study in the United Kingdom), Alabi was called into the “office of Apostle” (the highest office in the church’s five-fold ministry (see reference in Ephesians 4:11). This ordination was performed during the Lagos Area Convention of the church held at Ebute-Metta (the national headquarters of the denomination in Nigeria at the time).

In 1964, he played a pioneering role in the establishment of the church’s secondary school, the Apostolic Church Grammar School, Ketu, Lagos. In 1975, he was seconded to the same school as the chaplain and Bible knowledge teacher. He was there until around 1982.

In addition to his contributions to the educational development of the church, Alabi was equally a church planter. He was an active member of the church’s Evangelical Party, and was involved in much church planting, apart from Kano city, mentioned earlier.

As a pastor, he contributed a great deal to the consolidation of the Apostolic Church assemblies in Nigeria and the equipping of the saints. Other places where he worked as a pastor apart from Kabba and Kano (mentioned earlier) included Mushin Assembly, Lagos (1966-1968); Ilaro, in Ogun State (1968-1969); and Ile-Ife, Osun State (1969-1975). Significantly, these three places where he labored as pastor are now area headquarters (the equivalent of a diocese).

He was transferred in 1975 to the church’s secondary school in Lagos (mentioned earlier). This was in response to an urgent need for a scholar in theology. He remained there until 1982.

In 1982, in recognition of his gifts and services as a great pastor, teacher, evangelist, church planter, and administrator, Alabi was appointed by the church authorities as the first Benin City area superintendent (the equivalent of a bishop of the church, i.e. the administrative head of all the assemblies in the former Bendel State of Nigeria). As a direct product of his evangelical zeal and church planting work, that area has today produced an additional seven area headquarters, now bringing the total number of areas in the old Benin City Area to eight.

When he became superintendent, he automatically became a member of the church’s General Executive Council. Four years later (1986) he was appointed a member of the Executive Council (LAWNA Territory) which automatically qualified him to be a member of the church’s National Executive Council. In 1995, he was appointed the second National Secretary of the Apostolic Church in Nigeria (after the death of the first, Pastor G. B. Oladele). He also became a trustee of the Apostolic Church, LAWNA Territory, and The Apostolic Church, Nigeria, respectively. These new appointments necessitated his transfer from Benin City to Lagos as the Olorunda-Ketu superintendent. In 2004, he was again transferred to Ibadan (about a one hour drive from Lagos) to be the Ibadan area superintendent.

Alabi also served in other capacities through which he contributed to the development of the church. He was the pioneering director of education of the Apostolic Church (LAWNA Territory). He also served as the chairman of the governing council of the church’s theological seminaries in Ilesa (Osun State) and Jos (Plateau State) between 1984 and 2005. He equally functioned as the chairman of the governing board of the Apostolic Church Grammar School, Ketu (Lagos State).

Alabi was a great apostle, evangelist, pastor, and teacher of the Word, a church planter and administrator par excellence that can never be relegated to the background in the planting and consolidation of the Apostolic Church in Nigeria. He was a great biblical scholar and author. One of his spirit-inspiring publications is the book entitled: “Sanctification.” He loved young people and promoted education and music in the church. He was well known by all and sundry for his combined virtues of honesty, integrity, transparency, and accountability; a gentle but firm and fair leader who pushed for constant improvement in ministerial trainings so as to better serve the church.

He retired from active church service (pastoral work) as Ibadan area superintendent in 2006 at the age of 79, but continued in the capacity of the National Secretary of the Apostolic Church, Nigeria, until his call to glory on the glorious Sunday morning of September 28, 2008 at the age of 81. He was buried on December 5, 2008.

This story, submitted in 2011, was written by Rev. Dr. Samson Adetunji Fatokun, who is Senior Lecturer in Church History and Pentecostal Studies in the department of Religious Studies at the University of Ibadan, Nigeria, where he also serves as the DACB liaison coordinator.