This page is available in:
EN
FR
PT
SW 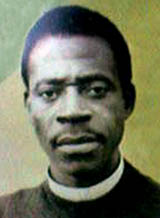 Joseph Ayo Babalola, a pioneer in the African independent church movement, was the founder of the Christ Apostolic Church, a major branch of the Aladura movement. The praying or prophetic (aladura) churches had begun to spread across the continent in the 1920s, and among the Yoruba they had taken strong root with the rise of the Cherubim and Seraphim Society.

In the 1930s, Babalola, who had previously been a highway department steamroller operator, undertook an amazing preaching ministry. After a vision telling him to preach the Gospel caused him to be judged mad and briefly imprisoned, he went to Lagos and joined the Faith Tabernacle, a Yoruba independent church that had broken with Anglicanism. From there he began traveling across Nigeria and into Ghana, attracting crowds and performing healing ceremonies. Unlike the Zionist churches, which appealed to the poor and marginalized of colonial society, the Aladura movement appealed to urban workers.

Babalola preached a Christian revival, attacking traditional religious practices, burning fetishes, idols, and witchcraft paraphernalia in grand bonfires, and forbidding polygamy. The Christ Apostolic Church, which he founded in 1955, took its name from a British denomination that helped in its formation. It was neither antimissionary nor anticolonial. Indeed, it had no social or political doctrine at all but instead emphasized spirituality; it was a holiness movement. For these reasons the government did not attempt to attack it, as had happened in the case of William Wadé HARRIS in Ghana and Simon KIMBANGU in the Belgian Congo. Babalola was jailed for a few months on suspicion of participation in a witch eradication campaign, but that was the extent of his conflict with colonial authorities. Babalola headed the church as general evangelist, while its president, Sir I. B. Akinyele, Oba of Ibadan (who was knighted by Queen Elizabeth II), represented its social prestige and public acceptance.

After the death of Babalola, the church continued to grow and in the 1990s had about 500,000 members, with an annual growth of about 15,000. It had 2 seminaries, 26 secondary schools, and a teachers’ college. It has missions in West Africa and overseas among expatriate Nigerians as far away as Houston, Texas.

This article is reproduced, with permission, from *An African Biographical Dictionary, *copyright © 1994, edited by Norbert C. Brockman, Santa Barbara, California. All rights reserved.