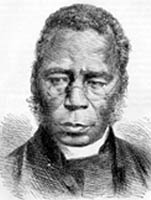 First African bishop of the Anglican church; explorer and missionary in southern Nigeria.

He was born in Yorubaland, where he was captured during the civil wars (1821) and sold to Portuguese traders on the coast. The vessel transporting him to America was seized by the British antislavery patrol, and he was released at Freetown in Sierra Leone. There he was educated by the Church Missionary Society (CMS), and was baptized in 1825. Following a brief visit to England he enrolled in the Fourah Bay Institute, and after graduating became a school teacher. He impressed his superiors as intelligent and very devout, and was invited to join the British Niger Expedition (1841). He then went to England where he was ordained (1845). He returned to West Africa as a missionary, serving briefly at Badagry before being posted to Abeokuta in Yorubaland (1846). In 1854 and 1857 he accompanied W. B. BAIKIE’s expeditions up the Niger River.

The period was one of grandiose European missionary plans for expansion in West Africa. When it was decided to create a West African diocese with an indigenous African pastorate, Crowther was selected a bishop and was consecrated in 1864. Thoroughly Victorian in his outlook, he was immensely successful in promoting Christianity, missionary education, and capitalistic development throughout the Niger valley.

In the 1880s he began to lose control of his diocese to younger missionaries who questioned the policy of establishing an indigenous African pastorate. He also faced pressure from the European trading community led by Sir George GOLDIE, who wanted to see British missionaries extending British influence. A number of Crowther’s agents came under attack for moral turpitude, and he was blamed for poor discipline. Crowther himself had long noted that his agents were untrained, and that he had no means to supervise them. A soft-spoken and retiring individual, he made little effort to counter the charges. He was forced to resign in 1890, dying the next near.

Although Crowther is best remembered for his missionary activities, he also made valuable scholarly contributions in his journals of the Niger expeditions, and his study of the Yoruba language, published in the 1840s and 1850s.