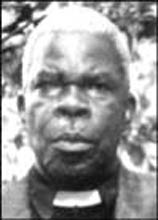 Rev. Jeremiah U. Ekaidem became the leader of a group in Nigeria that unofficially started the Church of the Nazarene there. Nigeria is the most populous country in Africa with an estimated one hundred million people comprising close to five hundred ethnic and language groups.

During WW II a Christian Nigerian was serving with the Allied forces in North Africa and Europe. In the late 1940s he met a Nazarene crewman from a merchant marine ship that docked in Lagos, who gave him a tract with the name and address of the Church of the Nazarene on the back. He was deeply moved by what he had heard and read and shared it with his small church back at his home. He had difficulty over the education of his children in his church. So he and a few others went out and in Abak started a school and church, naming it the Church of the Nazarene. The leader of the group at that time was a Rev. Umoh.

They are located in the southeastern corner of Nigeria populated by the Ibibio and Ibo people. Some of the people work in modern manufacturing plants. Others are farmers and labour clearing the jungle and cultivating cassava, yam and grains.

During the next few years they corresponded with Nazarene Headquarters in Kansas City, Missouri. General Superintendent Hardy Powers stopped over in Nigeria in 1951 to meet them but failed to make contact because of communications problems in those days.

Jeremiah Ekaidem was one of the group when, in 1964 with the help of a Nigerian attorney, they registered the Church of the Nazarene. They submitted the Manual as their Constitution. The church continued to operate as a fairly well organized district but despaired of ever having “their church” come. They received overtures from another denomination and for a brief time joined it, but they recognized doctrinal differences, so they returned to their Church of the Nazarene.

Nazarene missionaries Revs. George Hayse and Jack Riley, visiting Nigeria in the early 1980s, tried to locate this group but failed to contact them.

Finally in June 1986, Dr. Bruce Taylor received a letter from Rev. J. U. Ekaidem, explaining their situation and inviting the church to come. It said in part: “We heard you were in Nigeria. We are the registered Church of the Nazarene and want you to come visit us for we want to be a part of the Church of the Nazarene International.” Dr. Taylor did indeed meet with them and carried on complicated and delicate negotiations with them for the ensuing two years. On April 3, 1988, their recognition was finalized. Rev. Ekaidem said that day, “I have waited for forty years for my church to come…now we are one!”

There were about forty churches and 6,559 members. The congregations range in membership from thirty to three hundred members. The largest church, located at the district center in Abak, is an attractive cement block building that easily seats fifteen hundred people. Many smaller churches are constructed of bamboo poles with thatched roofs. Most of them are rural churches. Most of the members are subsistence farmers and only twenty percent have a secondary education. About half of them have a primary education and can read and write their own language which is Effik. Only a few of the pastors are comfortable in using English. The major industry of the area is the production of palm oil.

The credentials of Rev. Jeremiah U. Ekaidem were recognized and he was appointed superintendent of the district.[1] This group had however no real knowledge of the Church apart from what they had gleaned from the Manual. The greatest concern and need was for theological education for their pastors and biblical instruction for their people. There was much work to be done. In 1989 the Nigeria Nazarene Theological College was established.[2]