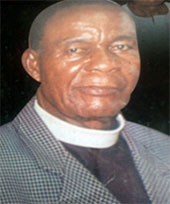 Edet Okon Ekpo was born around 1926 into the family of Bassey Ukpe Esekung of Eyo Ukpe Esekung family in Uboro Oro, which is now in Urueffong/Oruko Local Government Area of Akwa Ibom State, Nigeria. [1] When Ekpo was still a child, his father, Pa Okere Abasi Ukpe, a rich merchant, died. Thus, the nurturing of Ekpo became the responsibility of his mother and elder brother, Nduonyi Ekere Bassey who was a teacher and a staunch preacher in the Methodist Church.[2] Thus, Ekpo grew up in a Methodist Church in his early life.

Ekpo started his schooling in 1936. He attended the prestigious Methodist Primary School, Oyubia. However he could not complete his primary education earlier enough due to the death of his only sponsor, Mr. Nduonyi Ekere Bassey.[3] Later, thanks to the help of a kind-hearted in-law, Mr. Etim Asuquo Olughu of Ukuko Ataraya, Ekpo completed his primary education.[4] As a civil servant, he also undertook further in-service training in veterinary medicine.

After his primary school education, Ekpo became a trader. He started as a trader assistant under Mr. Asuquo Osung of Udung Ukpong, now in Okobo Local Government Area, Calabar, Rivers State, Nigeria. He later started a shop of his own. With the help of an Eket District Officer, Mr. Cobb, Ekpo secured a job with the department of agriculture. Then, he worked at Oron and was later transferred to Ibadan where he received in-service training at Umudike and Enugu.[5] Consequently, he was promoted to the status of Agricultural Assistant on an annual salary of £16:10cd, which was the Nigeria legal tender at the time. Upon completion of another in-service training in veterinary medicine, Ekpo was posted to Oron. While at Oron, he applied for the post of Estate Assistant Manager at an agricultural estate that had just been built in Ndiana, in the Cameroon. Although he was given the appointment, he was unable to take it up due to partial blindness.

Edet Okon Ekpo was born into the Methodist Church. Indeed, the Christian life of his elder brother, Mr. Nduonyi Ekere Bassey, a renowned Methodist teacher and catechist probably influenced Ekpo to become a practical Christian. However, he became an ardent member and preacher of TACN later in life. The record of his dramatic acceptance of the Apostolic Church’s system of worship notes that, in response to an advertisement, Ekpo applied for the post of Estate Assistant Manager at an agricultural estate. He was interviewed. While waiting for the result of the interview, he was inflicted with partial blindness for several months due to terrible illness.[6] This ailment prevented him from taking up the appointment of Assistant Estate Manager that was offered to him. The record states Ekpo was unconscious for days. His mother, Ayon Oyofose, wept bitterly for her only son.

The young Edet was taken in this state of unconsciousness to the house of Okon Abasi Owoekere (of Edok Oruko in Urueoffong, Oruko Local Government Area) who was a native doctor. Although, with the many efforts made by Okon Owoekere there were indications of partial recovery from unconsciousness, all attempts to restore Ekpo’s sight yielded nothing.

However, while Ekpo was at house of Owoekere for months, he had a religious experience in which he saw three white men who appeared to him with water in a hand-washing basin. After they berated him for his defiance and earlier rejection of God’s offer to him, they gestured to him to wash his face with the water in the basin if he would accept the offer to join the ministry of TACN.[7] He washed and his eyes were opened in the dream. He woke up the following morning to discover that his sight had been restored. That faith healing marked a turning point in the life of Ekpo as he decided in 1942 to become a bona-fide member of TACN. On June 5, 1942, Ekpo was baptized by immersion. In 1943 and 1946, he was set apart as a deacon and ordained an elder in TACN, Idua Asang. In May 1950, the council of The Apostolic Church Nigeria in Oron town appointed Ekpo as an Evangelist Interpreter. He accepted the offer but later abandoned the service due to marital instability.

Following these events, Ekpo left for Cameroon. During his stay in Cameroon, he planted several notable assemblies including, TAC at Mboko, Komenge, and some others around the creeks. Between 1957 and 1959, he also undertook certain significant evangelical crusades in Tikko and Victoria in Cameroon. In addition, he was recognised as a church builder, and a prudent and pro-active manager of church resources.

Ekpo’s long service in the ministry of TACN, spanned about sixty years. He traveled through the villages, towns and cities within the Cross River and Akwa Ibom States of Nigeria. He contributed significantly to the planting of churches in Nigeria and Cameroon. Some of the churches he established included TAC Mboko, Komenge, Tikko and Victoria in Cameroon. He was a peacemaker because he hated tribal sentiment, prejudice, discrimination and pride. Edet Okon Ekpo was an outstanding evangelist and apostle. He left an indelible mark in the lands of Ibibio, Annang, Yakurr and elsewhere for the gospel.

This story, received in 2017, was written by C. A. Adeleye, formerly Dean of Academics at the Apostolic Church Nigeria LAWNA Theological Seminary, Ilesa, Osun State, Nigeria, under the supervision of Professor Samson Fatokun, DACB Liaison Officer, University of Ibadan. He has authored several works in the area of Church History and is currently pursuing his doctorate in Religious Studies at Obafemi Awolowo University, Ile-Ife. This biography is part of his on-going research entitled “Leadership Dynamics and the Growth of The Apostolic Church Nigeria, 1931-2011,” Faculty of Arts, Obafemi Awolowo University, Ile-Ife, Nigeria.