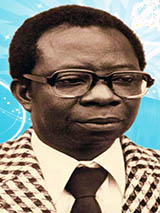 James Onorakpene Eregare was the first Seventh-day Adventist church member and clergyman from Oruerakpo town and from Agbon Kingdom of Delta State.[1]

Eregare was born around 1933 into the polygamous home of Pa Eregare at Oruerakpo in Agbon Kingdom of the Ethiope East Local Government Area of Delta State, Nigeria. Pa Eregare had five wives and seventeen children. Eregare was his mother’s third child. Pa Eregare died in 1942 when James was nine years old. As a result of his father’s death, it was a struggle for Eregare to survive in Oruerakpo in Agbon Kingdom.[2] He grew up in the village until he was a teenager. When he was a teenager his elder brother took him to the creek area, Okitipupa in Ondo State to live with him. That is where he received his primary education. The first school Eregare attended was Saint Paul Primary School, Okitipupa.[3]

Agbon kingdom can also be described as Agbon ẹkpotọ or Agbon clan. It is one of twenty-two subunits of Urhobo peoples and culture that have been in existence since the rise of the Benin Empire in the 1440s. The Agbon Kingdom’s traditional seat of government is at Isiokolo. The people of Agbon speak Urhobo as their mother tongue with little or no dialectical forms. The Nigerian pidgin is common and widespread in this kingdom as well as English, the lingua franca of Nigeria.[4]

Eregare’s first contact with the Seventh-day Adventist Church came in 1954 through a home evangelism series. The home method of evangelism was conducted through a series of home to home visitations. James Eregare was a member of the Roman Catholic Church when pastors Solademi and Alabi B brought the Seventh-day Adventist message to him. At the time Eregare was a business man and also working with UCA at Okitipupa. Having gone through the thorough study of the series of Bible lessons, he became convinced of the Sabbath message. Before he accepted baptism he decided to consult his parish priest on the Sabbath message and his parish priest confirmed that the Sabbath is Saturday. Without much delay, based on his personal conviction and the confirmation of the Sabbath truth by his parish priest, Eregare got baptized immediately in 1955. That same year, he attended Otun Teacher Training College, Otun, (now called Ekiti State) in Nigeria to prepare him for the ministry.[5]

After this brief training at the teachers’ college, Eregare was transferred to Ile Ife, now Osun State, as a hospital Chaplain in 1956. In 1957, he got a call to work in Benin City with Pastor S.A. Majolagbe where they carried the Adventist Mission to the Benin people. He was there until 1958.[6] Thereafter in 1959, he went to school at the Adventist Secondary School, Bekwai, in Ghana, where he obtained his West African School Certificate in 1960.[7] He attended Adventist College of West Africa (now called Babcock University) where he received his GED Certificate in 1962. He then gained admission into Oakwood University in 1973 for his Bachelor of Arts program but could not attend for financial reasons.[8]

Between 1963 and 1964, Eregare was transferred to Ugbo land. After a year, due to the idea of ‘sex for the body and body for sex,’ which was common among the people of that community at that time, he got married to Comfort Eregare (nee Akusu) of Okpara inland of Delta State to enable him to avoid sexual temptation and for team ministry. In 1968, he was transferred back to Benin City, Edo State from Ugbo land. From 1969 to 1975, he worked as a hospital chaplain and a district pastor at Ile-Ife in what is now Osun State. In 1976, after the session of the Seventh-day Adventists in the West Nigeria Mission, he was elected into the offices of Lay Activity, Sabbath School, and Youth Director, covering the old west and mid-western region of Nigeria. In 1984, he became a potent executive secretary to the old west and the mid-western region. During Eregare’s tenure as director and executive secretary to the church in the old west and mid-western region, his most outstanding achievement was the inauguration of the old Dorcas Ministry, now Adventist Women’s Ministry, which is now functioning in great capacity to aid the church and communities in spiritual and developmental activities. In 1985, he was transferred to Ikirun, Oyo State as a district pastor where he remained until 1986. From 1986 to 1992, he worked at Ilorin, still as a district pastor. From1992 to 1999, he worked as a district pastor in Lagos in former Yaba District, which now comprises about five or six districts in the present Atlantic Conference of the SDA Church. Eregare, in his account, mentioned that about forty churches were planted during his ministry until he retired in 1999.[9]

Eregare was a leader who helped those under him grow at their own pace.[10] He was popularly known as pastor “No Problem” as he worked to bring peace into people’s lives. He was a man who faced crises with a special attitude of “No Problem”. Eregare believed that if a person believed truly, God would aid miraculously in his or her challenges and in any relationship where he or she experienced crisis. Thereby, his ministry brought hope to several lives. He had a manner that endeared him to his children and to others, which was sustained through his ceaseless and devoted prayerful life. Furthermore, he was very loving, caring and compassionate.[11]

One of the most significant events of his ministerial work was the mass conversion of the majority of Ugbo people from the only recognized community African Church to the Seventh-day Adventist church. The Seventh-day Adventist Church came to Ugbo in 1963 during the reign of King Mafimishebi, whose reign spanned between the pre and post-independence years. Pastor Eregare was the first Seventh-day Adventist missionary sent to this community. He had barely any members until he passed a test - set for him without his knowledge, shortly before his marriage. In the past, every pastor who had been sent to this community had engaged in sexually promiscuous relationships with members of his church. Consequently, the community church had had no pastor for a while. Upon Eregare’s arrival, the community thought that they could force him to leave by sending one of the prettiest girls in the village to embroil him in a scandal. The young woman went to him and attempted to seduce him. Eregare, however, both refused her advances and refused to compromise. Rather, much to the surprise of the whole community, he prayed for her. This event brought about a mass conversion and the establishment of the Seventh-day Adventist Church in the area. This was around 1964.[12]

Eregare was also one of the early pioneers to Benin just before Nigerian independence in 1960. He worked tirelessly with S.A. Majolagbe to form the foundation of what is now Edo Conference of the Seventh-day Adventist Church in Nigeria. His missionary enterprise in Benin was not without its challenges, however. Eregare faced a language barrier and religious double standards. There was also a general inclination of the people towards their own culture and worship. However, in 1958 God made the establishment of the Seventh-day Adventist faith possible.[13]

Eregare had served in different departments of the church in the Old West Nigeria Conference with the then Mid-Western Region. He served as evangelist, women’s ministries coordinator, Sabbath school/lay activities director, youth director, and as a general secretary. He served on the executive committee for over twenty-eight years. He represented the Church at conferences and seminars in different countries across the world including Kenya, South Africa, Ghana, West Germany (as it was then), Russia, Norway, and Sweden to name a few.[14] In his ministry he was best known for his solemn communion services and administrative skills.[15] He was an astute organizer, motivator, peacemaker, and councilor, and he was a go-getter.[16] He served as a pastor in about eight Nigerian states including Kwara, Oyo, Osun, Edo, Ondo, Delta, and Lagos. He retired from active service in 1999 after serving the church to the best of his ability and devotion for a period of forty-three years. After retirement, he never ceased working. Rather, he labored among the Sapele members and his immediate communities until he died on June 16, 2013.[17] Eregare is survived by his wife, children, in-laws and grandchildren, all well placed in different capacities and walks of life for the glory of God.

Olooto, Dannon. A member of the clergy at the Atlantic Conference of the Seventh-day Adventist Church in Lagos, Nigeria, interviewed by the author. June 30, 2013.

This article, received in 2014 and updated in 2016, was written by Emmanuel Orihentare Eregare, Ph.D., son of James Onorakpene Eregare. Since 2013, Emmanuel Eregare has been a lecturer in the History and International Studies Department at Babcock University, Ogun State, Nigeria, a DACB participating institution. Dr. Abiodun Ayodeji Adesegun is liaison coordinator.