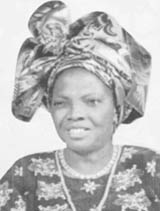 Mama Felicia Omotunde was born on July 25, 1921, to the family of Mr. Elijah and Mrs. Aina Aje of Ile Olowu, Imesi-ile, in the Obokun local government area of Osun State, Nigeria. On December 30, 1947, she married Rev. John Adekola Ebun Famonure of the Methodist church at Otapete Methodist church, Imesi-ile. They lived in Obajimo’s compound, Odowu Imesi-ile, and by the grace of God, their union was blessed with children [1], grand-children, and great grand-children. Apart from her nuclear family, Mama was very fond of her late brother, Mr. Joshua Aje, who showed a special interest in her education and helped her with her training.

Her commitment to the Lord Jesus Christ

Mama Felicia Omotunde Famonure (née Aje) was baptized on December 3, 1933 at the Wesleyan church, Osogbo by Rev. R. A. Ludlow, and confirmed as a full member of the Methodist church, Nigeria, on December 28, 1941.

Her husband, the very Rev. John Adekola Famonure of the Methodist church, Nigeria, was the first Methodist Minister in Imesi-Ile. She remained faithful to the church and to the Lord until her departure from this life. At one point in her life, she accepted Jesus Christ as her personal Lord and Savior. On December 18, 2009, at the wedding ceremony of her first grandchild, she re-dedicated her life to Christ by raising her hands, and she was prayed for, along with others. After the ceremony one of the daughters discussed this with her and she confessed that she was born again before that date, but that it was simply a dedication to continuing in the love of Christ.

She served as a class leader for several years at the Methodist church in Bodija, (diocese of Ibadan). On July 1, 2006, due to her advanced age, she was honored with a new title, “Class Leader Emeritus.” She was one of the matrons of the Christian ladies league of the same church, a society that was very dear to her heart. She also served as the chief patroness of the Boy’s Brigade, a society her late husband had served with passion. She made her financial contributions to the Susannah Wesley Hostel Project, and to the Methodist church’s Wesley University in Nigeria. Famonure was a fervent worshipper, and even in her old age she would ask her daughter (with whom she was staying) to take her to church. As the wife of a minister, she spent a lot of time moving from one station to another. Her last appearance in church was on Easter Sunday, in 2010. In August of 2009, when she experienced some health problems for a few days, a servant of God who prayed with her at that time received this message: “I want to take her home.” Famonure had great faith in the Lord, which helped her to go through life successfully. She confessed at her 80th birthday anniversary in 2001 that, “My life is full of testimonies and I never hesitate to declare the goodness of God openly, and He blesses me the more. Glory be to his name. Since testimonies are a result of trials, I had plenty of both.” She understood what it meant to fellowship with Christ in His suffering.).

Famonure completed her Higher Elementary II (Standard VI) education in 1941 after which she proceeded to the Wesley Guild Hospital, Ilesha, Osun State. She became a registered nurse of the Nursing Council of Nigeria on July 9, 1945, and received the Grade II Midwifery Certificate on June 1, 1946. She became a Nigeria Registered Nurse Grade I on June 6, 1973 and a Nursing Sister October 1, 1975.

Location of service as a nurse/midwife

After her training at Wesley Guild Hospital, she was sent to Ipetu-Ibokun to be in charge of the midwifery and welfare dispensary for one year, and after her marriage she served at the dispensary in Osu, near Ilesha. She resigned in 1951 to join her husband, who was on transfer to Ode-Remo in Ijebu-Remo. Her first appointment with the Ministry of Health as a nurse was on May 18, 1954 with the General Hospital, Sagamu - Ogun State. In 1955 she followed her husband to Osogbo, and in 1960 they moved to the Igbobini circuit. But due to the absence of a general hospital, she had to settle at Okitipupa in 1961, where she could practice her nursing profession. In 1964 her husband was transferred to the Aiyedun circuit in Ekiti, but she had to seek transfer to the General Hospital, Akure, in order to retain her job, which was an additional source of income for their family. In 1968 she joined her husband in Ogbomoso, where she worked as a nurse/midwife at the General Hospital. She was promoted to the post of nursing sister and served from 1971 to 1976. She served in the nursing profession meritoriously for twenty-two years and she retired on July 22, 1976. She followed her husband to his new posting as the warden of the Methodist Laymen Training Institute on December 21, 1976. After the death of her husband on June 18, 1977, she relocated to Ibadan, Oyo State, where her second child and her husband are residing, and she began to fellowship with the Methodist church, Bodija, until God called her home on Sunday, August 29, 2010 at 8:20pm. [2]

Funeral service program and the biography.

Addendum: Tributes to her life and character

“Precious in the sight of the Lord is the death of the saints,” Tunji Babatope, CAPRO, Ghana. “We rejoice in the memories of such a fantastic and Godly mother. We know she has gone to be with the Lord,” Dr Ngozi Elumogo (U.K).

“Mama was our chief patroness. She attends to the call of [the] Boys Brigade in our company. May her soul rest in perfect peace,” Prince and Mrs. Olu Akinsanya (Captain, Boys Brigade, Bodiga).

I can never forget her.

She raised all our children, and in her hands each of them was born.

She cared and prayed for me and for each of us.

And that is why I can sincerely call her my mother. Rest until we meet at the feet of Jesus. Pro (Chief) B. E. Olufemi

“Bye-Bye, Mama. We love you. God loves you best. Your soul will rest in perfect peace. It would have been good for you to live forever, but God’s covenant does not permit [this for] human beings. We love you, your smiles and your behavior. You will surely be in the hands of Jesus Christ with God Almighty. Rest in perfect peace Mama,” Abiodun Omokanjuola and family. “Know it is a goodbye for only a short while. You will be at the welcome party when we come or when you join the Master to meet us in the air. See you soon Mama,” Naomi Famonure.

“How does one describe a woman who nursed patients at government hospitals and got her entire family involved in praying for particular patients by name? How does one explain the strange mix of a disciplinarian who easily bursts into tears when her child is in distress? How does one place a woman who spent much time in God’s presence and still had time for people, even grandchildren, a woman of firm principles yet loving peace to a fault? Her name is mother, Mama Famonure, who even in death looked so peaceful. We celebrate you, virtuous woman of inestimable value. Goodnight mother, goodnight!” Bayo Famonure

She was a powerful intercessor. I learned a lot from her doggedness in prayer and I could always count on her prayers. She faithfully upheld me before the Father, reminding Him continually about me, about all of us.

My beloved granny had a zest for life. I enjoyed her life right down to the very last moment. I was the grandchild privileged to be there when she passed onto glory. Dr. Fisayo Olufemi

This article, received in 2010, was written by Adewinle Oluwatoyin of the Zethar Al-Umma Foundation Inc. Sokoto. The DACB liaison coordinator is Rev. Martins Atanda.