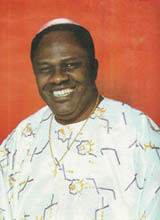 As a young Christian, I once heard my pastor say during a morning service that Christians could raise the dead in the name of the Lord Jesus Christ. I believed it with all my heart. And flying around on my bicycle in those days, I went through the city of Benin in search of a dead person to raise to life. After about five hours of hard searching I found a compound where a little girl had died a few hours before. The corpse had been cleaned and prepared for burial. I walked boldly up to the father of the dead child. “The God whom I serve can bring your baby back to life,” I told him. “Will you permit me to pray for the child and bring her back to life?” The man was startled, but he agreed. With great enthusiasm, I walked into the room and up to the bed. The child was cold and dead. With strong faith in the Lord, I called on the Lord to restore the child back to life. I turned to the corpse and called it by name, “Arise in the name of the Lord Jesus Christ.” Oh Glory to God! The corpse sneezed, heavily, alas. The child had come back to life! (Benson Idahosa)

Benson Andrew Idahosa was born in Benin City on September 11, 1938 of Apoor pagan parents. He was a sickly infant who was always fainting. As a result of his constant illness his father ordered the mother to throw him in the dust bin. When he was eighteen months old he was left on a rubbish heap to die. He was rejected by his father, sent to work on a farm as a servant and was denied education until he was fourteen years old. His education was irregular due to the poor financial status of his parents. He later took correspondence courses from Britain and the United States while working in Bata Shoe Company.

His Conversion and Call to the Ministry

His conversion was dramatic and his calling supernatural. He was converted by Pastor Okpo on a football field one Sunday afternoon while playing soccer with his teammates. Thus, young Benson became the first Bini member of Pastor Okpo’s small congregation. As a young convert he became very zealous in winning souls and in conducting outreaches in villages around Benin City.

He was called to the ministry in a night vision from the Lord. “I have called you that you might take the gospel around the world in my name, preach the gospel, and I will confirm my word with signs following,” said the voice from heaven. The room was filled with the presence of God as Benson fell to his knees beside the bed: “Lord, wherever you want me to go, I will go.” He prayed on through the night, renewing his vows to God and interceding for his people who were yet to hear the message of salvation.

After his call, Benson launched into ministry work preaching from village to village the gospel of Jesus Christ with great power and anointing. More people confessed Christ as their Saviour, and more healings occurred as he prayed for the sick.

Expansion of His Ministry and His Credentials

Benson Idahosa, the archbishop and founder of Church of God Mission International Incorporated with its headquarters in Benin City, Nigeria established over 6,000 churches throughout Nigeria and Ghana before 1971. Many of the ministers he supervised pastored churches of 1,000 to 4,000 people. In addition to filling the position of archbishop of Church of God Mission, he was also president of All Nations for Christ Bible Institute, president of Idahosa World Outreach and president of Faith Medical Centre. He held positions in numerous organizations including the college of bishops of the international communion of Christian churches and the Oral Roberts University in Oklahoma.

Idahosa earned a diploma in divinity from Christ for the Nations Institute in Dallas, Texas, which he attended in 1971, a Doctorate of Divinity in 1981 from the Word of Faith College, New Orleans and a Doctor of Laws degree from Oral Roberts University in March 1984. He also received other degrees from the International University in Brussels, Belgium.

Archbishop Benson Idahosa and his wife Margaret Idahosa were blessed with four children.

Soul winning was Idahosa’s primary concern. With a motto “Evangelism our Supreme Task,” he worked towards this goal of reaching the unreached in Nigeria, Africa and the rest of the world with the Gospel of the Lord Jesus Christ. As a black African, he found the doors of African countries were wide open and he ministered in over 123 countries all over the world.

Crusades played a major role in his ministry. He was involved in at least one crusade per month. A record crowd of nearly one million people a night attended his Lagos Crusade in April 1985. He established the Redemption Television Ministry with a potential viewing audience of 50 million people.

According to Mrs. Gordon Freda Lindsay, president of Christ for the Nations Inc., Dallas, Texas, U.S.A.:

I know of no young black in all of Africa who is reaching millions as Benson is,–in crusades with hundreds of thousands in attendance, in his weekly nationwide telecast, in his Bible School, training eager students from several nations. He also conducts campaigns in Sweden, Singapore, Malaysia, Korea, Australia and the United States, where he often appeared on national religious telecasts. His burden for souls, his ministry of healing and miracles, even to the raising of several dead, demonstrates he is especially called of the Lord in these end times.

Benson Idahosa is sought after by everyone in his state, from government officials to beggars. When they posed questions and explained their problems to this man they received instantanous miracle solutions, just as people did in Bible days with God’s prophets. And the people get miraculous answers from this mighty leader of God’s people.

Benin City respects and salutes this great man of God, even at death. I have been with him on visits to many officials, to the governor, to the powerful Benin tribal kings. He moved with God and his people know it. His great miracle cathedral (his headquarters) seats over 10,000 (1981). His Bible School attracts upper class people from different African nations. And they also come from Maurice, India, Pakistan, Sri Lanka, Bangladesh, Indonesia, Singapore, Philippines, Hong Kong, Japan, Korea, the Middle East, Europe and other nations of the world–a truly International Bible Training Centre of dynamic faith. People know that Bishop Idahosa preached what he practiced. Dr. Idahosa’s evangelistic ministry has reached nations around the world. He was the first black African evangelist to shake Australia in a massive crusade that got national attention. His seminars have affected Christians and church leaders in many countries. I sincerely salute this man because he practiced among his own people what he preached to the world. Benson Idahosa was a man who believed God’s promises and that God’s miracle provision applies to Africans as well as to Americans. He believed that Africa has a part in God’s work, and Africa will reap God’s blessings.

Many who follow Idahosa’s teaching have been saved from poverty and have learned to plant out of their desperate need and to look to God as their divine source thereby becoming prosperous Christians in their own land. Idahosa rose from the rank of an ordinary man to world leadership as a pastor, builder, counsellor, prophet, teacher, apostle, evangelist,–a man of godly wisdom and of Christ-like compassion, whose ministry has blessed millions the world over. Idahosa was the greatest African ambassador of the apostolic Christian faith to the world.

The Secret of His Success

Idahosa operated in faith and he had a robust faith. He believed and trusted God with a childlike faith. He once said that living a daily life of absolute faith in God is the only secret to great success. He believed God for everything. “All things are possible to him that believes.” He spent quality time in prayer and in the study of God’s Word. He said that if someone spends time studying the Bible and acting on it, people will come looking for that person for life solutions. Idahosa also spent time studying the works and lives of other successful people both in the gospel ministry and other fields of human endeavors and he applied the principles he learned about these successful people to his life and ministry. He was very energetic and hardworking. One of the ministers who served under him said that he had never seen a person who worked as hard as Archbishop Benson Idahosa. He was committed and consistent and he had confidence in himself. He was very humble and full of godly wisdom.

Archbishop Benson Idahosa was said to be the leader of over seven million Jesus people worldwide before he went to be with the Lord in February 1998.