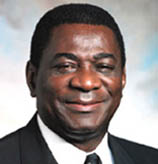 Professor Ogbu Uke Kalu, the Henry Winters Luce Professor of World Christianity and Missions at McCormick Theological Seminary in Chicago, died unexpectedly, after a brief hospital stay, on January 7, 2009. He was 66. He is survived by his wife Wilhelmina and four children: Edward, Stella, Jayne, and Patience. [1]

In 2001, he was appointed Henry Winters Luce Professor of World Christianity and Mission at McCormick Theological Seminary in Chicago, USA. As a resident of Chicago, Dr. Kalu was a member of Progressive Community Center - The People’s Church, where he worshipped regularly and taught adult education classes.

Professor Kalu was one of the most influential Nigerian scholars. He was respected internationally as a towering figure in the fields of Global Missions, African Christianity, and Global Pentecostalism. From the early 1970s until his death in 2009, he provided leadership in theological education in Africa and expanded the boundaries of Church History. A prolific writer on a wide range of subjects, Kalu has authored or edited more than sixteen published books including Divided People of God: Church Union Movement in Nigeria (New York, 1978); The History of Christianity in West Africa (London: Longman, 1980); African Church Historiography: An Ecumenical Perspective (Berne, 1988); Embattled Gods: Christianization of Igboland (Lagos/London, 1996); Power, Poverty and Prayer: The Challenges of Poverty and Pluralism in African Christianity (Frankfurt, 2000); African Christianity: An African Story (University of Pretoria Press, 2005), African Pentecostalism (2008); Clio In A Sacred Garb: Christian Presence and African Responses, 1900-2000 (2008); and over 180 articles in journals and as book chapters. One of his latest books was African Pentecostalism: An Introduction, published by Oxford University Press in 2008, which is already regarded by many as the authoritative work on the subject.

He served his field as a member of the editorial board of over fifteen academic journals including Journal of Religion in Africa; Mbari: The International Journal of Igbo Studies; Ikenga; African Theological Journal among others. He was also editor of West African Religion (1975-1987), Religion (1977-1980), and Nigerian Journal of Social Studies (1979-1982).

He also served Christianity in many ways. He was the secretary general of African Theological Institutions (Nairobi, Kenya) from 1970-1981; chairman, Conference of African Theological Institutions (Nairobi, Kenya). Until his death, he was secretary and coordinator, Associations of African Church Historians and member of the Governing Council, Spiritan School of Theology, Enugu, Nigeria. He was also a member of the Executive Board of Currents in World Christianity, University of Cambridge and chair of the Executive Board section on Evangelism and Globalism in 1998.

Ogbu Kalu was respected internationally not only for his scholarship but for his church leadership. He was a man of deep Christian faith and conviction and served as an elder in the Presbyterian Church of Nigeria. But the most important thing to him had always been the family. [2] Those who knew him on a professional and personal level will miss him dearly.

Personal Communication with the subject.

This obituary, received in 2009, was written by Chima J. Korieh who teaches African History at Marquette University, Milwaukee, Wisconsin, U.S.A. He holds a PhD in African History from the University of Toronto, Canada. Before joining Marquette, he was associate professor of African history at Rowan University in New Jersey.