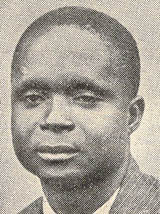 David Osmond Odubanjo, one of the founding fathers of the Christ Apostolic Church Nigeria, played a significant role in its development and was its first general superintendent.

Odubanjo came from Ijebu-Ode in Ogun State, Nigeria. Odubanjo’s personal records give his date of birth as May 7, 1891. His father was David Banjo, from the compound of Oshiyemi Kakanfo Joye in the Porogun area of Ijebu-Ode, Ogun State, Nigeria, and his mother was Ayanbanke Osin.

Odubanjo’s father was a member of the St. Saviour’s Anglican Church, Ijebu-Ode, where the Precious Stone or Diamond Society prayer group was founded. Although his father died a Christian, there were indications that he was converted to Christianity from the Muslim faith late in life. Mr. Banjo named his son David after himself because he was his first male child, who traditionally would have been expected to take after him in all things. Odubanjo was loved by his father, but his father died when he was only thirteen.

Odubanjo received his elementary education at Christ Church Primary School, Porogun, in Ijebu-Ode from 1900 to 1904. When his father died in 1904 he went to live in Ondo with his uncle, Owen Sanya Olukoya Onabanjo, who paid for Odubanjo to continue his education at St. Andrews College, Oyo, from 1905 to 1908. After graduating in 1908, Odubanjo served as a junior teacher at his alma-mater, the Christ Church Primary School, Porogun Ijebu-Ode, after which he returned to St. Andrews College, Oyo, where he graduated in 1912. After this, he was employed as a full-time primary school teacher at Odogbolu for one year before he resigned from the teaching profession in 1913. He then worked with the Colonial Police Force as a clerk in the administrative department until 1918 when he decided to go into full-time ministry.

It is not clear if there was an exact moment that Odubanjo made a decision to become a Christian. He might have been drawn to Christ at home and at the Christian schools that he attended. As he got older, he grew in the Christian faith, developing himself spiritually through personal studies of the Bible until he became a very strong religious leader.

In July 1917, while working with the Colonial Police Force, Odubanjo was transferred to Warri from Lagos. A few days before his departure for the new station, he went to say goodbye to a friend of his, Mr. Sodipo. There, he stumbled upon a Christian magazine called Sword of the Spirit that was lying on the floor. He was attracted to the magazine by the title of an article, “The Seven Principles of Prevailing Prayers.” Odubanjo asked his friend if he could take the magazine and the friend obliged; this magazine later triggered Odubanjo’s missionary activities.

The materials created in Odubanjo a thirst to live according to their injunctions and challenged him to a life of commitment to spreading the gospel. He prayed earnestly and made a vow to God, saying that if only He would bless him, he would return home to spread this new teaching among his people in the Ijebu-Ode area. God answered his prayers, and in 1918 he resigned his appointment with the colonial police office, left Warri, and returned to his hometown of Ijebu-Ode, preparing to start full time work as a minister. Upon arriving home, he started preaching the gospel in earnest, using the Faith Tabernacle literature which he had received from Pastor Clarke as resource materials.

Shortly before Odubanjo’s arrival at Ijebu-Ode, a prayer group had been formed by some members of St. Saviour’s Anglican Church to deal with the effects of the world-wide influenza epidemic and the First World War. This group was later to be known as the Diamond or Precious Stone Society. During one of Odubanjo’s rounds of preaching around town, he came across a member of the group, Mr. D. O. Segun, who introduced him to the group. At his first meeting with the group, the group was amazed to see that Odubanjo was more well-read than all of them in the matter of divine healing, a doctrine cherished by the group. Also, he was had a better secular education and had a greater knowledge of the Word of God than any of them. The leadership of the group was thereafter handed over to him and he did his best to integrate the group into the mainstream of the Anglican Church.

However tension soon rose between the group and the Anglican Church over such practices as divine healing, infant baptism, reliance on dreams and visions, and other major beliefs of the group. As a result of the rift the group secured an affiliation with the Faith Tabernacle Church of America and adopted its name. Within a short period of time branches of the church were established in Lagos, Ibadan, Ilesha, Minna, and a couple of other major cities in Nigeria; membership increased tremendously, thanks to the work of Odubanjo and his team. Odubanjo, as the missionary correspondent of the Diamond Society, played a prominent role in its affiliation with the Faith Tabernacle and its subsequent development as an independent church denomination in Nigeria. He was for many years its presiding pastor in Nigeria.

A great revival broke out in Ilesha which changed the course of the FTC and brought it into the limelight. Joseph Ayodele Babalola, who was a major catalyst of the revival, met Odubanjo through an FTC member named Daniel Ajibola in Ibadan. Babalola had previously been following a call by God to preach the Gospel but had faced opposition in the Anglican Church. After observing his zeal and testimony, he was baptized by Odubanjo and became a member of the FTC.

Early in 1930, various issues arose within the FTC and the church needed to make decisions. A conference of the leaders was therefore convened in Ilesha. Babalola attended the conference as a delegate. During this conference a remarkable miracle occurred that altered the course of the FTC for good: a child was raised from the dead by God through Babalola. This miraculous event marked the beginning of the great revival of Oke-Oye that made Babalola and the FTC very well known.

However, the revival had both positive and negative effects. While it gave momentum to the work of the church, spread to many major cities across the nation, and made many converts, the success of the evangelistic campaigns also triggered hostility from the colonial government and from some sections of the community.

Leaders of the church were subjected to hardships, intimidations, harassment, and humiliations at different levels of society. As a measure to back down the rising wave of persecution, leaders of the church were advised to seek external assistance through another foreign mission, as the affiliation with the FTC didn’t seem to be helpful at the time. Consequently, on behalf of the church Odubanjo sought cooperation with the British Apostolic Church in Bradford, England. They responded by sending missionaries to Nigeria; the relationship was sealed by ordaining seven of the church leaders as pastors. Among them was Odubanjo, who was at the time the leading African prophet of the church. Having solidified the relationship, the FTC changed its name to the Apostolic Church. Eventually, a rift over the use of drugs for medicinal purposes led to a split in the the Apostolic Church, and this produced the Christ Apostolic Church (CAC). Odubanjo became the CAC’s first general superintendent and the first principal of its Bible Training College.

Odubanjo was used instrumental in laying the foundation of what came to be known as the Aladura churches in Nigeria, and he could be referred to as one of the founding fathers of African Pentecostalism. He was a man of prayer, an erudite teacher of the Bible, a good administrator, an ardent believer and committed church leader who was never late to a church service. He was not an open air revivalist, but miracles characterized his ministry, and many people were healed through his ministry. Odubanjo was energetic, faithful, and helpful in all the arrangements which culminated in the founding of the first African Indigenous Church in Nigeria. He gave total support to Babalola and this added greatly to the success of Babalola’s ministry and that of the CAC.

Odubanjo was a dutiful husband to his wife and a loving father to his children. He loved his people with the love of Christ. Their salvation was uppermost in his heart, and he prayed zealously to God for a great revival in his native land, never resting until his prayers were answered.

Odubanjo was an ardent believer in divine healing throughout his life. He was reported to have died of an illness affecting the prostate gland which affects older men, making it difficult for them to urinate. Even though this disorder could have been corrected with a minor surgical procedure, Odubanjo held to his belief in divine healing. He preferred to die for what he believed in than to be treated medically.

Odubanjo died in 1959 at the age of 68, the same year as Babalola. Some observers within the CAC declared that the golden era of the CAC came to an end when Odubanjo and Babalola died. However, the fact that the church survived is a testimony to the solid foundation which it received from its founding fathers, of whom Odubanjo was chief.

Oludare, S. E. A. “The Trio of C.A.C. Founding Fathers: Odubanjo, Akinyele and Babalola.” M. A. Thesis in the Department of Religious Studies, University of Ibadan, Nigeria, 1999.

This article, received in 2008, was researched and written by Dr. Michael Leke Ogunewu under the supervision of Dr. Deji Ayegboyin, DACB liaison coordinator.