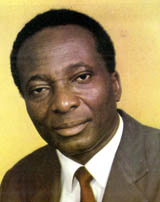 Samuel Olusegun Odunaike was one of the founding fathers of the Foursquare Gospel Church in Nigeria. Nurtured in the Apostolic Church of Nigeria, he was one of the first three Nigerians who came into contact with Rev. Harold Curtis and his wife (also an ordained minister), the first Foursquare Gospel Church missionaries to Nigeria. Odunaike joined hands with them to start the work of the mission there. He was tremendously used of the Lord to advance the course of the movement right from its inception in 1955 until his death in 1991. He functioned in various capacities and rose through the ranks to become the leader of the church from 1970 to 1983, a period of thirteen years.

Odunaike was born on August 9, 1934, in Lagos, into a Christian family from a Pentecostal denomination. His father was Pastor Samson Folorunsho Odunaike, and his mother was Mrs. Florence Ebun Odunaike. They were both in the Apostolic Church in Nigeria. As committed Christians, they were able to bring up Samuel in the fear and nurture of the Lord through their exemplary lives of consecration and devotion.

After his primary schooling, Odunaike attended Abeokuta Grammar School, in Abeokuta, from 1944 to 1950. He started work with the Nigerian Railways Corporation and rose to the rank of staff assistant grade I before resigning in 1962 to join what was then British Petroleum (B.P.) Limited, now African Petroleum (A.P.) Limited. He served African Petroleum meritoriously in various capacities for twenty-four years before resigning in 1986. He was the personnel manager from 1972 to 1977, the staff administration manager from 1977 to 1985, and the manager of corporate affairs from 1985 to 1986.

In 1958, Samuel Odunaike married Miss Rachael Folashade Macauley and their marriage was blessed with two children: Iretidayo (deceased) and Oluwaseun.

The time of Odunaike’s conversion to Christianity is not quite clear, but the genesis of his Christian service can be traced to 1951 in the Apostolic Church. A few years later, he met Reverends Mr. and Mrs. Harold Curtis, who were Foursquare Gospel Church missionaries to Nigeria. He took part in the pioneering work of establishing the movement from December 1954 to November 1955. It is in this regard that he is being referred to as one of the founding fathers of the church.

Like the two other founding fathers, Rev. Boyejo and Rev. Osuwa, Odunaike was among the first students to attend the Bible College started by Rev. Harold Curtis. However, due to a shortage of personnel at the time, the trio of founding fathers had to combine being students with lecturing to the junior classes, so they were referred to as student-teachers.

Odunaike was the first Sunday School secretary of the Foursquare Gospel Church in Nigeria from November 1955 on, and its first national superintendent from 1965 to 1970. His designation as national superintendent was upgraded in December of 1970, at which time he became the first general supervisor of the church, a position he held until May of 1983. In between these appointments, he was ordained on October 23, 1966 as a minister of God by the International Church of the Foursquare Gospel, in Los Angeles, California, which is the mother church in America. He was indeed a blessing to the Foursquare Gospel Church in Nigeria. He led the church to more international prominence on many levels because of his involvement in the secular world, and thanks to his interdenominational spirit, intellectual ability, creativity, temperament and positive outlook on life. On a personal level, he achieved local, national and international recognition, and the Foursquare Church in Nigeria benefited significantly from these connections.

Odunaike played a significant role in many ecumenical organizations. On a national level, he was the treasurer of the Nigeria Evangelical Fellowship (NEF) in 1966, and was its chairman from 1970 to 1991. His chairmanship of the National Congress on Evangelization dates back to 1975 and his leadership was enjoyed for many years. In 1982, he became a member of the trustees of the Nigeria Bible Translation Trust. Within the African sub-region, he functioned as the chairman and president of the Association of Evangelicals for Africa and Madagascar (AEAM), now the Association of Evangelicals for Africa (AEA), as of 1977. At the global level, he was a member of World Evangelical Fellowship from 1977 to 1980. His membership in the Lausanne Committee for World Evangelization dates back to 1976, and in 1980 he became a member of the executive body of the Lausanne Committee. Two years later, in 1982, he was called to serve in the finance committee, which was a sub-committee of the Lausanne body. Worthy of mention too, were his services in the World Pentecostal Conference as a member of its advisory committee from 1974 to 1991, and in its presidium 1979 to 1991 as well.

In the secular field, he was a managerial professional and his achievements in that circle were significant. He was a fellow of the Institute of Personnel Management of Nigeria (IPM) from 1970 to 1975, the vice president from 1977 to 1980, and the president from 1980 to 1983. Furthermore, he was chairman of the Petroleum Marketers Group in Nigeria from 1981 to 1985, and of the Nigeria Employers Consultative Association (NECA) from 1985 to 1986. He was also the general secretary of National Parents Association of Nigeria from 1978 to 1986, and the vice president (Africa) of World Vision International circa 1986.

In spite of his very busy life, Odunaike still found time to write. Because of his love for the word of God and his aspiration to get it out to all, he wrote two books, which have become well-known: I Appeal to Caesar, published in Lagos, Nigeria by the Challenge Bookshop, and The Young Christian and Money, published in Nairobi, Kenya by the Evangel Publishing House.

Although he did not have the opportunity to attend a university or graduate seminary, he achieved a level of academic excellence. His dedication and hard work were recognized and fully rewarded when on February 15, 1981, a Doctor of Divinity honoris causa was conferred on him by the Board of Directors of the International Church of the Foursquare Gospel, Los Angeles, California, U.S.A., “in recognition of his exceptional leadership and outstanding achievements in the service of the Lord Jesus Christ.” He was the first person to be so honored within the Foursquare Gospel Church of Nigeria.

The contributions of Odunaike to the development of Christianity in the Foursquare Gospel Church of Nigeria and elsewhere were outstanding. He was a committed Christian leader, a great evangelist and an ardent teacher of the Bible. He lived to the age of fifty-seven, and served the Lord for four decades, mostly within the Foursquare Gospel Movement. Samuel Olusegun Odunaike died on April 11, 1991, after a brief illness.

This article, received in 2010, was researched and written by Dr. Michael Leke Ogunewu under the supervision of Rev. Dr. Deji Ayegboyin, DACB liaison coordinator.