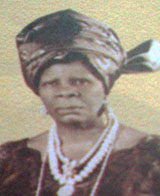 Agnes Okoh was an illiterate Igbo woman who, in 1947, founded Christ Holy Church International, an African Independent Church in Nigeria.

She was born to Onumba Emordi and Ntonefu at Ndoni in the Rivers State in 1905. At the death of her parents, she left Ndoni and settled at Asaba. She married James Okoh, a Ghanaian immigrant sailor in 1924. Only two of their children, Anyele and Anyetei, survived the high child mortality in their family. The death of her husband in 1930 and the loss of her children left her with severe migraines and in a state of despondency. She was healed by a prophetess after many fruitless attempts by western medical personnel and traditional healers. She left Asaba to live at Enugu where she was engaged in a textile business.

Her Call to Ministry

One day in April 1943 while returning from a market she heard a voice telling her “Matthew 10” repeatedly even though she did not see anyone. She rushed to a friend and asked, “What is Matthew 10?” The friend, partially illiterate, asked a young man to read the tenth chapter of Matthew’s gospel from the Union Igbo translation. Agnes and her friend rushed to the prophetess who healed her. The prophetess cautioned Agnes not to rush into ministry despite the clear call. Rather she should wait until God confirmed the call. As a result Agnes continued her textile trade at Enugu market.

In 1947, two years after her religious experience, she had a deep impulse to preach the Word of God. Consequently, she sold all the fabrics she owned, gave the proceeds to the poor, and began an itinerant evangelistic ministry in eastern Nigeria. Holding a Bible and a bell, she preached from one market to another beginning with the Enugu market. While preaching she realized that she had the gift of prophecy and healing. Twelve people initially joined her in her evangelistic itineration. She established a prayer group at Onitsha the same year but continued her evangelistic journey, traveling either in public buses, on foot, or by train. The theme of her message was new life in Jesus. She emphasized repentance, righteousness, and holiness. She trained some of her members to manage the prayer centers left in her wake while she continued preaching. Though illiterate, she was said to have frequently quoted portions of the Bible from memory to the astonishment of her followers. She was said to have asked frequently, “Obu na ife m na ekwu adiro na akwukwo nso?” which literally means, “What I am saying, is it not in the Bible?”

Agnes Okoh was noted for her disregard of traditional beliefs that were inimical to the spread of the gospel and to development of human potential. As a result she asked some local elders to give her portions of the evil forests (ajaw-awfia or ajo oshia) to establish prayer centers. Evil forests were dumping grounds for slaves, lepers, those who die through communicable diseases, lunatics, women who die at childbirth, those who commit suicide, those murdered, and those who died accidentally. The ghosts of the dead were believed to be angry at the living for not giving them decent and proper burials. They were, therefore, believed to be malevolent, punishing any living person who dared to enter the forest. The local leaders gave the forest free of charge to Agnes for they knew that if she were a false prophetess she would be killed by the malevolent spirits. After spending many days in the evil forest without any apparent harm from the malevolent spirits, she urged her followers to farm in the forest. The fertile forest yielded good produce for any one who cared to farm. This feat earned her the title Odozi Obodo, which literally means “town repairer.” The prayer ministry of Agnes Okoh was called Odozi Obodo Prayer Ministry. It was later named Christ Holy Church (Odozi Obodo).

Despite these significant spiritual accomplishments, Agnes Okoh was persecuted and taunted as a witch who used powers other than God’s in her ministry. She was accused of using the powers of Maami Water, a mermaid. The blessing of water as an element of healing was perceived as a legitimate proof of her links with the mermaid. Others also thought that she had a shrine at Ndoni, her hometown. She answered her skeptics by saying “Adigh m anu okwu ekwensu” meaning, “I do not hear the voice of the Devil.” At times she said, “Chukwu me kwalu fa ebele” which means, “May God have mercy on them.” In spite of her verbal defense, Agnes and her followers were ridiculed for clapping their hands, dancing, beating local drums and shouting halleluyahs when worshipping.

Against the odds of female marginalization in Igbo society and her inability to read or write, Agnes Okoh used her feminine qualities, spiritual giftedness, faith in God, and motherly passion to train many men to lead the church. Before being called to eternal rest, she identified leadership qualities in some of her followers and trained them. Seven of the people she trained became leaders of the church at various times. Those she trained fondly remember her strictness, love, and humility. Though she founded the church she neither claimed any leadership position nor performed any traditional pastoral duty such as baptizing, officiating at the Lord’s Supper, or ordaining pastors. She stayed behind, cheerleading, and mentoring the leaders. She was administratively addressed as “Prophetess Agnes Okoh” but she was popularly known as “Mama” or “Odozi Obodo.” She imprinted the fear of God, dependence on God, ecclesial we-feeling, the priority of preaching the gospel, and the need to be responsible to the followers, on the hearts of those she trained.

Agnes Okoh exercised her unflinching faith in God through healing and miracles. She was said to have raised the dead and healed many diseases. Her ministry was initially a faith ministry. She did not allow her followers to take any medicine as a means of healing. Pre-natal and post-natal care meant nothing to expectant mothers in the church yet it is claimed that there were no childbirth casualties. However she relaxed her faith healing stance in the mid 1970s.

In 1963 she claimed to have been directed by God to use the Nkissi stream at Onitsha for her healing ministry. There many people reportedly were healed as a result. Ten years later she used water from Olo Ogwashi stream at Ogwashi-Ukwu, Aniocha South Local Government Area in Delta State to heal. Oil, blessed water, and the laying on of hands coupled with prayer were her means of healing. She did not heal for money. Those healed, however, freely gave in return. Many became members of the church after receiving healing from the prophetess.

She was imbued with accurate prophetic utterances and the revelation of some people’s diabolical thoughts and plans. Notable among her numerous prophecies was her prophetic utterance about the end of the Nigerian civil war. Members of the church fondly remember her prophetic utterance in 1965 that, “Nigeria will be in turmoil, Nigeria will lose so many souls and spill so much blood…That corn which is being sold at 15 for 3 kobo will be sold at one for 60 kobo…” The prophecy was fulfilled during the Biafran war in Nigeria from 1966 to 1970. Her followers claimed the she prophesied that the war would end soon after December 1969. In October 1969 she ordered her members to broadcast in Igboland that the war would end after 1969. The war officially ended on January 12, 1970.

The hallmark of Agnes Okoh’s ministry to humanity was her philanthropy. She is remembered as someone who loved everyone irrespective of gender or denominational affiliation. She used gifts received from her wealthy members to provide food, clothing, and cash to the needy and destitute. She single-handedly constructed a nursery and primary school, a maternity home, and a public water spigot at Ndoni, her hometown. Education at the primary school was free as were the services provided at the maternity home. Nursing mothers at the Maternity home were only asked to buy detergents and kerosene. She led the people of Ndoni to construct roads and streets in the town. During her retirement her home served as a guest house for government officials and distinguished personalities who visited Ndoni. His Royal Highness, Chief Gabriel Okeyia, the Awo (chief) and Okpala-Ukwu (the most elderly person) of Ndoni testified in 2003 that “She helped many poor people. When there were no roads at Ndoni, she gathered people to construct roads and streets. It has been said that ‘a prophet has no honor in his hometown,’ but she was an exception. Everybody liked her.”

Her Call to Eternal Rest

Agnes Okoh died on March 10, 1995 leaving behind a church that is vibrant in evangelism, Bible teaching, and holistic ministry. She made it a policy that the church must care for its pastors, church workers, and widows. She instilled in her followers the need to depend on God in faith and be obedient to God no matter how sordid the circumstances. She impressed on the hearts of her followers not to relent in preaching the gospel. She believed the gospel had to be preached with a sense of urgency and a spirit of fortitude. It is no wonder that twelve years after her death Christ Holy Church International has grown in quality and quantity with now nearly 850 congregations in Nigeria, Togo, and Ghana. [1]