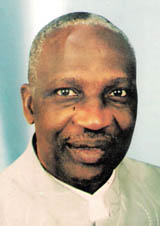 Olanrewaju Adigun Shitta-Bey was the general overseer and founder of Christ Deliverance Church in Lagos, Nigeria.

Olanrewaju Adigun Shitta-Bey was born on May 27, 1944, into the Shitta-Bey family of Martins Street, Lagos State in Nigeria. His parents were Alhaji Akanni and Alhaja Mosimoun Akanke Shitta-Bey (née Akiolu) of the royal family in Lagos State.

Born into a Muslim family, Olanrewaju always knew he was a special child. At the age of four, he could see visions, hear the Holy Spirit speaking, and, to the amazement of people around him, utter prophetic words that always came to pass. He offered his prayers differently from those of the Muslim tradition. He often spoke of how he saw brightly colored rainbows in his dark room when he was growing up-a phenomenon that continued even to the time of his death.

He married Olabisi Shitta-Bey (née Aranmolate) and they were blessed with children and grandchildren.

He served briefly in the Nigerian army in the early 1960s and in 1966, he traveled to Miami, in the United States, where he received an associate’s degree in Aeronautics. In 1972, he joined the Nigerian Airways as a pilot and eventually became captain, the highest position one could attain. He attended many courses overseas and retired from the service in 1999 when he felt a clear call to the ministry.

In the early 1980s, he attended a Baptist church service in the United States with his black American neighbors and there he had the conviction that God wanted to use him. In 1983, he finally gave his life to Christ and became a devoted man of God. Returning to Nigeria, he began holding a fellowship meeting at his house in Iyana-Ipaja, a suburb of Lagos, and in January 1987, he started a church which he called “The Healing Sanctuary.”

In March of 1995, the church moved to its permanent site at Km. 11, Lasu Igando Road, Isheri, Lagos. The church later assumed the name Christ Deliverance Church. Olanrewaju was the founder and general overseer of the church and had spiritual gifts of healing, prophecy, and teaching. His sermons were thrilling and inspired, which won many souls for Christ. He devoted his life, money, and strength to the work of God. This dedication is seen in the church building itself, which he singlehandedly started with money from his service in the Nigerian Airways.

Olanrewaju touched many lives and positively influenced all who came in contact with him. He was a defender of the helpless and the poor, not only through prayer but also with gifts of money. Those who knew Olanrewaju personally describe him as a brother, mentor, father, and loyal friend. Unpretentious and down to earth, he had the gift of encouraging those who felt burdened with insurmountable problems and giving them hope. He used humor to relate to others and encourage their faith in God. Generous to a fault, he never knew how to refuse any request for financial assistance and would spend his last kobo [smallest unit of Nigerian money: one naira is equal to 100 kobo] to help others.

Those whose lives he touched testify that “Captain” (as his friends and admirers called him) was a model of humility, godliness, goodness, hospitality, generosity, and integrity. For his wife, LA–as she fondly called him–was an ideal husband, a true partner, and an excellent friend. He was an excellent father and a strict disciplinarian. He protected and provided for them and encouraged them to aspire to the highest level of education and to trust in the Lord at all times.

Olanrewaju Adigun Shitta-Bey died on November 21, 2005 in the United States of America at the age of 61.