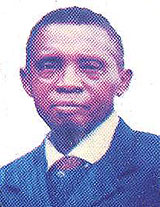 He had the standard schooling and basic education that was, in the pre-colonial era, a minimum prerequisite to teach in a primary school. While he was a professional teacher, he came into contact with the Seventh-day Adventist faith at Warri in Delta State.

In 1956, Osekete was one of the foremost ministers of the Seventh-day Adventist church in the area of what are now the Edo and Delta Conferences. He was converted to the Adventist Church through the work of the first official missionary to the Delta region, which was in what was then the mid-western region; through Pastor E. E. Onumegbu who was sent from the East Nigeria Mission. Osekete was called into the ministry in 1956. From 1956 to 1961, he worked under the East Nigeria Mission of the Seventh-day Adventist Church in Nigeria. Two years after Nigerian independence the West African Union Mission, under Pastor Welch, transferred him to what was then West Nigeria Mission whose headquarters were in Ibadan, Oyo State. At his request, he was stationed in the present Delta State. In the pre-colonial era, the Delta region was operating under what was then the East Nigeria Mission.

Osekete then worked at Bendel Mission in very challenging circumstances in comparison to those of twenty-first century ministers. His commitment to the mission could be described as sacrificio-mission to the people of his generation. Simply put, he was a missionary with little privilege and few pleasures who reached the people of his day through a Christ-centered mission. Evidence suggests that in the early part of his ministry he usually travelled on foot. It is told that he once made his own way six kilometers or more from one village to another because there was no reliable or readily available means of transportation. At the time after Nigerian independence he travelled on foot between the churches under his supervision, for example from Alalgeya to Ekapamre, and from Orhorokpe to Agharho. These journeys were not made on modern roads but on bush roads, which were considered dangerous even though the people in the villages at that time, the 1960s, were not hostile. If Osekete needed to cross a river, he went by canoe. He would then get out of the canoe and continue the journey on foot. If he caught a lift with a vehicle, he would alight at a particular point and trek along a path through the bush to look for a bicycle to continue with his journey to the villages of the churches he pastored.

Before Nigerian independence, the church paid him four pounds. About a decade later, when the country experienced what was called Udoji, 1972 to be precise, his salary rose to ten pounds. This did not really make any difference to his standard of living. The irony is that historically, whenever there has been an increase in salary, there has been an increase in the cost of living. Thus, the standard of living has not changed. However, even though his wage was not high due to his level of education, he never had any cause to complain.

In the 1970s, the idea of progress began to surface in Bendel Mission (which is now the Edo and Delta Conferences). Osekete was entitled to a motorcycle which he rode across Bendel State (now split into the states of Edo and Delta) to preach and to supervise the churches of that area. To aid his ministry the East Nigeria Mission also gave him a PA system for evangelistic campaigns.

This one particular enterprise made the work of transmitting the Seventh-day Adventist beliefs and the "Three Angels’ Messages" to the indigenous and non-indigenous people residing in his mission stations easier and more appealing. As Osekete explained it, a minister with this PA system would find singing and preaching easy. In this way they drew people to come and listen to the messages in their public campaigns between 1948 and 1961.

Osekete will be remembered for being the first person to give the maximum number of years to ministry in what are now the Edo and Delta conferences. To be precise, he gave over forty years of service before and after retirement. Additionally, when he was the minister in the area, he had given a remarkably wise and effective bible study at a village called Ogbonna, in the present Edo State, which led to the conversion of a denomination to the Seventh-day Adventist faith. He was the first Seventh-day Adventist to come from his home town of Obiaruku, in about 1950. He was also one of the first three converts to the Seventh-day Adventist faith in the present Delta State.

Osekete was a victim of one of the unfortunate, common problems faced by the early workers in the Seventh-day Adventist Church. This was the lack of a retirement housing plan. He retired to a rented apartment in his hometown, Obiaruku, Delta State. It was recorded that he owned an inherited landed property from his father, which he received many years after his father’s death. Pastor Osekete can never be forgotten for his spirit of commitment, mission-oriented selflessness, Bible-based teachings, his faithfulness to the Seventh-day Adventist fundamental beliefs and the Spirit of Prophecy and his overwhelming gifts of visitation. Even though he said that it was very challenging growing up, working as a minister and successfully taking care of his home till retirement, he felt fulfilled at the end of it. He was able to maximize the level of his education in the ministry. At the age of about ninety-five, after official retirement, he still kept the flame of the Gospel at heart; persistently planning new strategies towards membership growth, particularly for his home church at Obiaruku, until February 4, 2010 when he was peacefully called to sleep in the Lord.

Ibhiedu, Benedict (A pastor in Delta Conference and a son-in-law to Lazarus Osekete), interviewed by the author, August 4, 2014.

Ehiogae, Efe (A pastor who worked under Osekete between the late 20th and early 21st Century, now the Head of the Department of Religious Studies at Babcock University), interviewed by the author, August 3, 2014.

This article, received in 2014, was written by Emmanuel Orihentare Eregare, Ph.D., son of James Onorakpene Eregare. Since 2013, Emmanuel Eregare has been a lecturer in the History and International Studies Department at Babcock University, Ogun State, Nigeria, a DACB participating institution. Dr. Abiodun Ayodeji Adesegun is liaison coordinator.