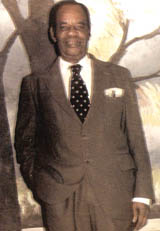 Friday Chinyere Usuwa was one of the founding fathers of the Foursquare Gospel Church in Nigeria. Born in 1914, he was the second of thirteen children. His father was a police officer. He started his primary education at the age of five at Wilcox Memorial School Aba and between 1929 and 1934 he attended St. George College Umuamata, Mbawsi in Abia State.

Not much is known of his conversion experience, but before leaving secondary school, he was already an active member of the Qua Iboe Church, where he taught Sunday school classes. He later joined the Assemblies of God church and, together with his brother-in-law Benson Nwaosuibe whom he fondly call Brother Ben, started the Assemblies of God church in Usaka-Eleogu, his hometown. He was a gifted teacher, pastor and evangelist and used his gifts to bring many to salvation.

Usuwa married Agnes Nwaosuibe in 1944 and the marriage was blessed with seven children.

Usuwa performed many mighty works during his mission. At Akabo Ahiara, a dead man was raised to life. On his way to Etchie, while crossing the Imo River in a canoe, Usuwa and others with him were threatened by a hippopotamus. Usuwa stood up in the canoe and rebuked the animal, which immediately sank into the river, allowing them to reach the shore safely.

He was licensed in 1951, and transferred to Lagos to establish an Assemblies of God Church. In the same year, he started the first Assemblies of God church at Ladi-lak Primary School Hall, Akinwunmi Street, Yaba. He was ordained in 1954 and worked with the church until 1955, when he left to join the Foursquare Gospel church.

He later became one of the founding members of the Foursquare Gospel church in Nigeria, together with S. O. Odunaike and J. Boyejo. In 1954, the Rev. Harold J. Curtis, a missionary sent to Nigeria for the Foursquare Gospel Church, contacted Usuwa through Rev. Pennington of the Assemblies of God church. In the first meeting with Rev. Curtis, he met Odunaike and Boyejo for the first time.

Since it was the policy of the Foursquare church that no one could become a pastor in the church without first attending LIFE Bible College, Rev. Curtis began the Night Bible College and Usuwa, Odunaike, and Boyejo were the first students. Although a student, Usuwa also taught at the same college and took care of the children’s Sunday school at Abule Ijesha, a surburb of Lagos. This Sunday school later became the Shomolu Foursquare Gospel Church, which is today one of the prominent branches of the church in Lagos. When LIFE Bible College, Ikorodu was opened in 1959, Usuwa was also appointed as a tutor, in addition to his teaching appointment at the Night Bible College and pastoral work at Abule-Ijesha. He was instrumental in training the first students in the school. He received his diploma in theology from LIFE Bible College in 1958.

On his return to southeastern Nigeria during the civil war, he planted many branches of the Foursquare Gospel Church. He was said to have planted twenty-four branches of the church across the nation. To his credit he took the Assemblies of God church from southeastern Nigeria to Lagos in the southwest, and took the Foursquare Gospel church from Lagos to the southeast.

While with the Foursquare church, he held many important positions. He was member of the central executive council (1954-1963), tutor at LIFE Bible College (1956-1978), divisional supervisor in the midwest and east, senior pastor, Ketu-Lagos (1978-1995), zonal superintendent (1992-1994), member of the board of trustees and chairman of the reconciliation committee (1998-2002). Usuwa played a great ecumenical role in the Foursquare church by helping to re-unite the church in Nigeria, which had split into two factions due to the conflict between Rev. Adeniji on the one hand and J. Boyejo on the other.

Usuwa attended many theological training courses and Christian conferences both at home and abroad, and mentored many important dignitaries in the Foursquare Gospel church in Nigeria. He received a certificate in Leaders-in Service from the West African College of Evangelism in 1994 and was awarded an honorary doctor of divinity diploma from the Mount Olivet Bible Academy and Graduate School (an affiliate of Faith University), USA in 1996.

He retired from the Foursquare Gospel church in 1995 after forty years of meritorious service. One might say of Usuwa, the man his father expected to be a policeman, that “instead of the baton to lead men to prison, the Lord God gave him the Bible to set men free and lead them to heaven.” He continued his life of evangelization until his last moment when he was called to glory on June 22, 2006, at the age of 92. He was finally laid to rest in his hometown of Usaka-Eleogu, Abia State of Nigeria on August 26, 2006 after an elaborate funeral ceremony by the Foursquare Gospel church which lasted a whole week.

Rev. (Dr.) Wilson Badejo, the general overseer of the Foursquare Gospel church in Nigeria, in his glowing tribute to Usuwa, described him as a general and an apostle for our time, a man who lived and served the Lord throughout his youth and led the Foursquare Gospel church, Nigeria. “He was a servant of God who lived for and served throughout his life, the master he loved so much. He lived and made indelible marks that would forever speak loudly to us (Christians) as pilgrims. He spared not his life but he did not lose it either (Luke 9:23-26). What a life! Yes, this is truly how to live and leave.”