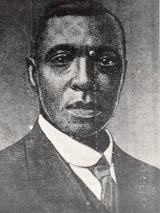 John Augustus Abayomi-Cole (1846 - July 1943) was a talented and versatile Krio (Creole) who, in the course of his long career, made his mark as priest, politician, author, agriculturalist, herbalist, and administrator.

He was born at Ilorin in Nigeria, of Sierra Leone stock, in 1848. He received his schooling in Sierra Leone, first under A. B. C. Sibthorpe at Hastings, and then at Freetown’s C. M. S. Grammar School. He was later employed by the United Brethren Church (U. B. C.) at Shenge, in the Bonthe district. While with the mission, he went to the United States, where he was ordained priest in the American Wesleyan Methodist Church. While in the States, he gave a series of lectures. One of these was his Revelation of the Secret Orders of Western Africa: Including an Explanation of the Beliefs and Customs of African Heathenism, which was published by the United Brethren Publishing House of Dayton, Ohio. It is a well-written book, but some of his arguments are inconsistent, and reveal that he had not yet come to terms with the worth and usefulness of African ritualistic societies. It seems, however, that this work opened his eyes to a different world, and gave him an absorbing interest in the cosmos. From this time on he began to delve into esoterism in general, and various secret societies, including freemasonry, in particular.

Upon returning to Sierra Leone, he took over superintendence of the Maroon Chapel in 1887. By 1893, however, after differences with his congregation, he removed for a time to “Beulah Hills,” on the way to Leicester, near Freetown, where he farmed ginger, a crop that was then in demand in England.

In the years that followed, while continuing his intellectual activities, he founded his own church, practiced herbal medicine, and engaged in practical farming and small-scale industrial activities, as well as in politics.

He became a Cabbalist, and fashioned his own brand of religion. In May 1905 he established an African church, the Gospel Mission Hall, where various ethnic groups congregated to worship. His piety appears to have amused a number of skeptics - he was known to some as “Jesus-passing-by.” But his religious activities nevertheless filled a need, as is witnessed by the number of adherents, including solid citizens such as A. J. Shorunkeh-Sawyerr and J. C. Shorunkeh-Sawyerr, who flocked to his church.

As an herbalist, he is affiliated with the National Association of Medical Herbalists in Great Britain. Gleanings from his Revelation indicate that he was very interested in the useful medicines of the secret societies. He consequently made a life-long study of remedial and medical herbs whose healing properties he employed to aid the sick. His literacy and interest in science gave him knowledge that he combined with the lore of traditional medicine to produce effective antidotes against rheumatic pains, skin troubles, nervous ailments, mental derangements and other ills. He is even credited with having given two blind men their sight!

He contributed regularly to the Sierra Leone Weekly News, a leading West African newspaper, and also wrote a news summary in Arabic that was published in Saturday Ho, a magazine-like publication that appeared from 1891-96. He was known to be sympathetic to Islam, and it was said that his father was imam, i.e. the spiritual head of an Islamic community. In effect, he was eclectic in his approach. He was capable of discussing Christian theology with the foremost prelate, while also treating the rituals and beliefs of esoteric societies with the same knowledgeable ease. One of his intellectual excursions in this vein was a paper entitled the “Philosophy of Paganism,” which he wrote in 1904.

He also wrote a Mende grammar. Abstract ideas did not, however, consign him to an “ivory tower” existence. He was a practical man, very much of this world despite his rapport with the “other world.” His practical capabilities included a proficiency at distilling spirits (for which he was chased out of Sierra Leone in 1911), at manufacturing sugar from molasses, at making soap, and at extracting various foods from corn. He also ventured into the palm oil trade, as well as into growing such cash crops as cocoa, cassava, yams, corn, and vegetables. To some, his schemes appeared too grandiose, yet if the government of the day had given them support, some success might have been achieved, particularly in diversifying the staple food of Sierra Leone, which was one of his aims. His belief in the importance of the soil was hammered home in numerous tracts on agricultural science. In his later years, he showed unbounded enthusiasm in founding the Agricultural Society (1922). Earlier, in about 1909, he had also founded the Sierra Leone Farmers Association, of which he was president.

In the earlier stages of his political career, he inspired the establishment of some pressure groups. One of these was the Public Committee against the Introduction of the Criminal Code (1918), at a time when it was feared that the code would give too much power to district commissioners. Another such group was the Sierra Leone National Defense Fund (1908), set up to defend Sierra Leoneans against the racial arrogance of the colonial establishment. His views on political matters were original and well argued. For a short while, from about 1911 to 1914, he became the Liberian Commissioner for the Interior (Native Affairs). Documents covering this period sorted in the Public Records Office in London are full of complaints by the British authorities about his activities as a traveling commissioner, especially during the period of border difficulties between Sierra Leone and Liberia. As early as 1886 he had been invited to Liberia by the Hon. C. T. O. King, father of C. D. B. King who was in office as Liberian president in 1926. In 1914 he was decorated with the insignia of Knight Commander of the Liberian Order of African Redemption for his diplomatic services and for his ministrations to the sick. Later, in 1926, he was also to be awarded an honorary doctorate by the College of Liberia.

His name is to be found associated with almost all the major political movements of his day. After World War I, he was a key figure in the local activities of the National Congress of British West Africa, founded in Accra, in what was then the Gold Coast, in 1920, and which held its second meeting in Freetown in 1923.

Like another activist, J. C. Shorunkeh-Sawyerr, Abayomi-Cole did not enter the Legislative Council. Although he was considered for nomination in 1921, being a man of “outstanding influence and undoubted ability,” he was passed over because he was “eccentric in his views,” was 71 years old, and was “not a lawyer.”

One of the most striking facts about Abayomi-Cole was his remarkable versatility. Many talents were packed into the little bundle of a man who was described in a pen portrait in 1926 as a nondescript person, but with a depth of character, who looked only 30 or 40 years old when he was in his 74th year.

J. Abayomi-Cole, Revelation of the Secret Orders of Western Africa: Including an Explanation of the Beliefs and Customs of African Heathenism, Dayton, Ohio, 1886, The Interior of Sierra Leone. What Can It Teach Us?, Dayton, Ohio, 1887, Astrological Geomancy in Africa, London 1898, Hala Goloi Mende Yiahu. First Book in the Mende Language, pamphlet, London, 1900, “Trees, Herbs, and Roots in West Africa,” Journal of the Royal Society of Arts, September 22, 1906; Christopher Fyfe, A Hisotry of Sierra Leone, London 1962; Leo Spitzer, The Creoles of Sierra Leone, Ile Ife, 1975; “Pen Portrait of Dr. Abayomi Cole,” in African World Supplement, June 1926.