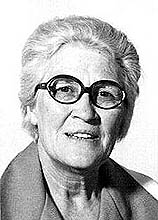 June A. Alexander was one of the faithful pioneer ladies in the Church of the Nazarene in South Africa. She was saved at the age of twenty during a Keswick Convention at Wellington, Western Cape, while she was taking a Bible course. She qualified as a nurse and married Rev. George Alexander (1895-1996). For twenty-five years he served as a pastor in the Methodist Church and fearlessly preached the doctrine and experience of heart holiness. Some of the early Nazarene members were converts of George and June Alexander.[1]

The Alexanders learned of the Church of the Nazarene in 1951 and joined its ministry in 1953. They pastored an English-medium church at Vanderbijlpark, Gauteng, from 1953 to 1960. At the time there were many people from various countries in Europe working there on contract with the Iron and Steel Corporation. Many children opened their hearts to the Gospel.

One evening a young Scottish lady knelt to pray for her husband and seriously-ill daughter. June asked her, “Are you saved?” She replied “Ay.” Returning the next evening she reported that the previous night God had showed her that the most important thing for her was to be saved, and she prayed through and found the Lord. On another occasion this lady’s young daughter was sent home from a hospital in Johannesburg to die, and the specialist advised them to pray. He said if she lived, she would suffer from severe brain damage. They did pray. The girl recovered and became a successful Christian business woman.

Auntie June (as she was affectionately called) served for a time as matron of the Nazarene Bible College. She was intensely interested in world mission and was the District Nazarene World Missionary Society President for twenty-three years. The Alexanders went to the West Rand to retire and were members of the Horison Church. There was a faithful group of ladies at the church. Among them were June Alexander, Ruth Cramond, José Garnett, Theresa Samson and Chubby Buys. They began praying for God to give them ten men in the church. God gave them amongst others, Billy Garnett, Heinz Schubert, Ken Tainton, Henry Knight, and Bennie Snyman, men of wisdom and grace. These men, along with their wives, have made a great contribution to the growth of the church.[2]

George Alexander passed away in 1996 about three months after his 100th birthday.

In December 2000 Evelyn, aged 53, the younger daughter of the Rev. George Alexander and Mrs. June Alexander, was involved in a horrific head on accident - caused by a drunken driver. He was killed instantly, but both Evelyn and her friend, who was driving the car, were taken unconscious to the Sunninghill hospital in the northern suburbs of Johannesburg. Evelyn suffered several broken ribs, a broken arm, broken leg and facial injuries. She never regained consciousness and underwent surgery three times. After about a week she suffered a heart attack and passed away. This was a very traumatic experience for June and the family [3]

One of Auntie June’s sons transferred her from the retirement home in Discovery to the Eastern Cape. She was very frail and in December 2007 she was in special care at a nursing home in Paarl in the Western Cape. On January 28, 2008, she was promoted to glory. She had been sitting in her chair when she suddenly collapsed and in a few moments was gone.