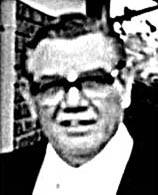 Christopher Daniel Botha and Etha were married in 1938 and they had seven children. Chris had to drop out of medical school at the University of Cape Town in his fourth year due to circumstances beyond his control. In the midst of his disappointment, he found the Lord during Easter services in 1945. Later that year Etha was also saved. Their lives were changed. He felt called to Christian service. He enrolled at the Andrew Murray Bible Institute (in Bloemfontein, in the Orange Free State) from whence he graduated. Etha also received training at the Murray Bible Institute. After that, Chris went into government service for a short while.

Chris Botha found some literature of the Church of the Nazarene, including copies of the Herald of Holiness. His reaction was, “This is my church. They preach holiness which I’ve already experienced.” They lived in Parys in the Orange Free State and during a mission campaign there in 1949 he came into contact with the church and joined it. He was granted a preacher’s license through the Rocky Mountain District and was ordained in 1952 by Dr. Hardy Powers.

In 1950, the Bothas were appointed to pioneer a church in Vanderbijlpark, a steel manufacturing city near Vereeniging. They arrived in March to find a very dirty house. They knew no one in the town except a minister who had lost his faith and dropped out of the ministry. Immediately they began advertizing and started regular services in their home. For a month no one attended and Chris preached to only Etha and their children.

One Sunday morning a man knocked and asked if this was the Church of the Nazarene. Pastor Botha told him it was. But the man replied, “Nee, hier is dan niemand” (No, but there is no one here). The pastor persuaded Mr. Blackie Swart to come in and that morning he gave his heart to the Lord. Rev. Botha always said that this was the only time that his whole congregation repented. Mr. Blackie and Mrs. Marie Swart were the first to be baptized.

Soon others came and the home became too small for the congregation so they moved to the garage and later to a tent pitched in the backyard. On April 9, 1950 the church was organized. Chris and Etha worked sacrificially and the Lord blessed their ministry. They saw many remarkable conversions.

Anna Lombaard saw their advertizement and came with a group of children. This was the start of their Sunday school. Sophie Drinkwater remembers that, as an eight-year-old child, she was busy scrubbing the floor when Rev. Botha arrived at their home and invited her to Sunday school.

Ria van Staden remembers how she was on the way to her church one Sunday morning and passed 7 Huxley Street. She heard how happily the group of people in the garage were singing. She went in and in this way became a Nazarene at the age of seven. Her twelve-year-old sister Jacoba later accompanied her to the services. She became the first secretary for the youth. Their brother Koos van Staden became the first member of the new church.

A Dutch lady used to play the organ that was manually pedalled. As she was unable to read notes she would come Saturdays and Etha Botha would sing the hymns so that the lady could play them by ear.

On August 20, Mr. Louis and Mrs. Malie Kriel joined them. He became the second pastor of this congregation.

They held a month-long tent campaign during which the largest attendance was fifteen and there were no converts. However a family that walked by came and asked if they prayed for the sick. This family later became members.

The congregation continued to grow and the Lord blessed. An offering was taken in Kansas City in the U.S.A. to fund a church building for them. During building operations, Fanie Smith accidentally fell through the rafters. Mr. Fanie and Mrs. Lilie Smith joined the church in 1952. The new church building was dedicated in October 1950 by Mrs. Charles H. Strickland. The following year the Bothas were able to move to a new parsonage. It was here that they tragically lost their ten-month-old daughter Evangeline.

They did much house-to-house visitation and ministered for twelve years in Vanderbijlpark. It was the fastest growing congregation in the district and by the 1980s this was still the largest Nazarene Afrikaans congregation in South Africa. After that they were called to Ventersdorp for about two years and then to Pretoria in 1969.

Botha was a faculty member of the Nazarene Bible College at Potchefstroom from its inception in 1954. He served prominently in the district organization and did valuable work translating literature into Afrikaans for the Bible College and the church.

Chris Botha prayed much and lived out holiness in his life even though at times it made him unpopular. He worked hard and took little time to sleep.

The Bothas retired in 1986 and settled in Parys where Rev. Botha passed away.[1]

Mrs. Etha Botha (1917-) tells how they experienced a great shortage of funds and she had nothing to contribute to the Easter offering. Right then a letter arrived from a friend in the Free State saying that the Lord had laid it upon her heart to send ten pounds to use as she thought best. Etha Botha gave it for her Easter offering.

It was a time of great sadness when their child died and for Etha it caused a great struggle. One day while out walking she came across a child that was not normal. Its little face looked so empty. The Lord then asked her if she would have liked for Evangeline to be like that. Right there she came to an acceptance of her loss and thanked the Lord. She would not have wished for a child like that.[2]

The Bothas’ daughter Elsabie (1940-) married Rev. Jerry Jennings. He was district superintendent from 1982 until 1994 when all the districts in Gauteng Region were merged.

Mrs. Etha Botha resides in Vereeniging and is active in the Lord’s work in the Duncanville congregation.