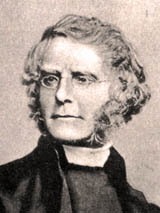 John William Colenso (January 24, 1814-June 20, 1883), was the Anglican archbishop of Natal from 1853 onwards, during the age of British imperial expansion. He was a militant champion of justice for the Zulu people and their traditional rulers, but was also a center of theological controversy because of his nonconformist views, a tradition carried on after his death by his equally outspoken children.

Born in St. Austell, Cornwall, England, the eldest son of an unsuccessful mining agent, Colenso struggled to overcome penury and in the mid-1830s took a degree at Cambridge, where he distinguished himself in mathematics. He later wrote a widely-used mathematics textbook. After a short teaching stint at Harrow, the famous English public school, he entered the ministry. In 1853, after eight years in a country parish in Norfolk, he was appointed bishop of the newly- created bishopric of Natal. Colenso threw himself into missionary work, mastered the Zulu language, and within a few years had compiled a Zulu dictionary and grammar, as well as a translation of the New Testament and other portions of the scriptures.

In an age when literal interpretation of the Bible was the norm, Colenso shocked his contemporaries by publishing a theological work entitled The Pentateuch Critically Examined (1862-79) which questioned High Church orthodoxy and cast doubt, amongst other things, on accepted beliefs about the authorship of the Pentateuch. When the archbishop of Cape Town attempted to have Colenso removed in 1862, he countered with an appeal to the British Privy Council. Although the ruling went in Colenso’s favor, he was faced thereafter with persistent hostility from other church authorities, as well as from many colonists who did not subscribe to his liberal humanitarian approach on questions of British policy concerning Africans. A new bishop was appointed in his place in 1860, but he nevertheless remained at his post, although with a dwindling body of supporters.

When colonial authorities singled out the rebellious Zulu chief Langalibalele for suppression in 1874, Colenso carried the chiefs case to the British parliament and press. With the help of his formidable daughters, Harriette and Frances, he continued, by preaching and in writing, to crusade against Britain’s subjection of the Zulus, both before and after the Anglo-Zulu war of 1879. The Zulus named him “Sobantu, “ meaning “father of the people.” Years after his death, Africans are said to have referred to Colenso as “the last honest white man.”