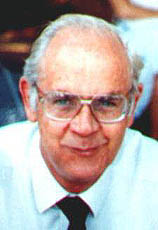 Rev. Jeremiah Jennings was raised on a farm at Hekpoort near Krugersdorp (West Rand). The family were nominal Christians. He went to an Afrikaans primary school and an English high school. After that he worked at Iscor, in Pretoria, and was studying toward a diploma in mechanical engineering. He loved rugby and soccer at school and played baseball and soccer at Iscor.

Once, while awaiting treatment for an injury, he heard someone explaining to another about salvation. It was the first time he had heard of such a thing. He told his new department head about this peculiar person. This man was a Christian and Jerry went with him to the Nazarene church. Jerry found the girls there attractive.

Finally he bought a Bible and, finding what he heard preached to be biblical, he found the Lord on August 7, 1955. He began holding a Sunday School in Bophelong Township with the help of an interpreter. During the Africa Evangelistic Band’s convention at Kaapmuiden in July 1956, he felt called to full-time service for the Lord.

His parents gave him no encouragement and his Anglican priest was very unhappy about it. Also, by this time, he was earning a good salary at work. After praying and fasting for six days he found assurance of his call in Isaiah 6:8, “Then I heard the voice of the Lord saying, ‘Whom shall I send? And who will go for us?’”

He went to Bible College at Potchefstroom in 1959. The men students used to have water fights with bombs and hoses. Auntie Max had them clean the kitchen and halls in the evenings. Late one Sunday night, Mr. Sydney Steyn came in quietly from his church at Welverdiend. Jerry hid behind the stairs and frightened him as he passed. Steyn had brought three bottles of milk for his friends, and in his fright threw them in the air and there was milk everywhere and all over his fine black suit.

For six months Jennings pastored as a student at Parys and for some time he preached only to his girlfriend, Miss Elsabie Botha (1940-), daughter of Rev. Chris Botha. She was the only one attending. They were married in 1960 and pastored at Parys. Times were difficult financially. They always asked for ten cents worth of dog meat and the butcher asked where they purchased their own meat. They had to keep changing butcheries.

Once he invited a friend home and phoned to tell Elsabie, not realizing that there was no food in the house. On his way home, Jerry felt impressed to visit a family. They gave him a meal to take for the family as well as fifty rand in an envelope. Arriving home, he found Elsabie’s eyes were red with crying.

Jerry Jennings was ordained in 1963. 1965 to 1969 were happy years as they pastored at Horizon where the church board was composed only of ladies. Jerry also taught at the Florida Bible College. In the crisis on the district in 1971, Jennings stood for unity in the church. After that, there was a great dearth of pastors and Jennings volunteered to go to Rustenburg.

The mines were closing as the U.S.S.R. had flooded the world platinum market and its value had dropped drastically. Seven hundred families had moved out of town but the church began to revive. While Jennings was in the States for an evangelism conference, another economic crisis came and they lost thirty-two of their fifty-two members. He began a bus ministry such as he had seen working in America. A wonderful spirit of trust and unity developed as the congregation had braais (cook-outs), played volleyball and watched rugby on television at the parsonage.

From 1975 to 1982, the Jennings pastored successfully at Potchefstroom. In 1982, Rev. Jerry Jennings was elected district superintendent and continued consolidating and building up the growing district until 1994. The national elections of that year opened the way for the merger of the church districts in the Gauteng Region.[1]