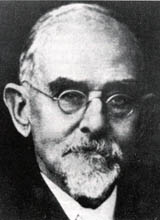 John Daniel Kestell (February 15, 1854-February 9,1941) was a minister of the Dutch Reformed Church (DRC), Bible translator, and Afrikaner cultural leader. His mother was an Afrikaner and his father an 1820 settler from Devonshire, England.

He was born in Bloemfontein. Having studied at the universities of Stellenbosch and Utrecht in the Netherlands, Kestell was admitted as a minister of the DRC in 1881. The next year he was called to Kimberley and in 1894 to Harrismith in the Orange Free State. Here he completely identified himself with the Afrikaner cause. At the outbreak of the South African War of 1899-1902, he accompanied the Harrismith Commando as field chaplain, soon becoming the trusted counselor to President M.T. Steyn and General Christian de Wet. Together this spiritual, political and military triumvirate remained in the field to the bitter end in 1902. Steyn once said that, to him personally, Kestell was worth more than a commando during the war. Kestell recorded his war experiences in Met de Boeren-commando’s, published in Amsterdam in 1903. The English translation was titled: Through shot and flame, London (1903). In 1909 he and co-recorder Dirk van Velden, published the minutes of the peace negotiations of the war. (See bibliography for the English edition.) In 1920 his biography of a beloved friend appeared in Cape Town under the title: Christiaan de Wet.

As a gentle yet steadfast moderator of the DRC in the Orange Free State he prevented the schism in the church that threatened with the Afrikaner rebellion of 1914-15. For over a year he was the editor of De Kerbode, the mouthpiece of the DRC of South Africa, before taking up the rectorship of the Grey University College in 1920. He resigned after seven years to pay full attention to the translation of the Bible into Afrikaans, a task which he and a few colleagues had taken up in 1924. The complete translation appeared in 1933.

The depression of the thirties created a serious poor-white question. Believing that a nation saves itself only through action, Kestell established the Reddingsdaadbond, a successful movement that probably marked his greatest moment.

Kestell’s life was characterized by a willingness to serve. The irresolute were inspired by the magnetic influence he had over them. For his service he gained the affectionate and honorary title of Vader (Father) Kestell, and was awarded three honorary doctorates. He is buried by the side of his trusted friends, M.T. Steyn and Christiaan de Wet, at the foot of the National Women’s Monument in Bloemfontein.

J.D. Kestell and V.R. van Velden, The Peace Negotiations Between the Governments of the South African Republic and Orange Free State, and the Representatives of the British Governments, London: 1912.