1962
Church of the Nazarene
South Africa 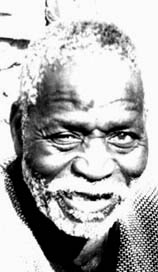 Chief Mmashila Letswalo was the leader of the Banareng people of the Mmamahlola tribe who were forcibly moved during the 1950s from their traditional homeland high in the Wolkberg (Drakensburg) mountains of the northeastern Transvaal (Northern Province) to the Metz farm in the lowveld near the Lorraine Nazarene mission. Previously, with their homeland high in the mountains where the rain clouds gathered, this tribe had had considerable renown for rainmaking in the lowveld. They lost this prestige with the move. It also meant that they had to leave the graves of their ancestors whose spirits they prayed to. The government justified this move by saying that the mountain water sources were being damaged by people living up there.

Understandably this was very humiliating and distressing for the tribe. For a long time they refused to build homes or to settle in their new location but lived in tents provided by the government which were very inadequate. They suffered great privation especially in winter.

In the mid 1930s missionaries Irvin and Fannie Dayhoff, together with mission workers and their young son, Paul, had climbed the distant steep mountain trails from the Thabeng mission to visit these people and their chief. The journey lasted about a week. They travelled by ox wagon and took camping equipment along.

Then, in 1959, when the tribe’s elderly chief, Mmashila Letswalo, was in great trouble with his people and was physically very ill, Irvin Dayhoff, Kopero[1] (One who places beacons between chiefs), visited him, prayed in his homestead and gave him a Pedi Bible. This made a great impression on the chief. As the Dayhoff continued to visit, the chief became convinced that the missionary was his friend. At first, though, the chief refused permission for regular services to be held at his royal homestead.

However, in 1961, when the missionaries, Rev. Paul and Mrs. Mae Hetrick, came to Lorraine mission he finally consented. Regular Thursday afternoon services were started. Soon his wife, Flora, began to seek the Lord and became a Christian through the ministry of Mae Hetrick. Then during the camp meeting at the mission in 1961 Chief Mamatlhola found the Lord. He began removing the traditional religious paraphernalia from his home. This was a great victory as none of the other Pedi chiefs of that lowveld region had ever been truly converted. God particularly used Rev. Johannes K. Sentsho, the church leader in the Lorraine area at that time, to bring the light of the gospel to Kgoshi (Chief) Mmashila Letswalo.

When Chief Letswalo passed away in 1962, his wife Flora overruled the nonChristian chieftains and councillors of the tribe who wanted a traditional burial and demanded a Christian burial for the chief. This again was a very remarkable victory for the gospel. The Lorraine Nazarene church was asked to take charge of the burial. By then Rev. Chris, Motsotsonyana[2] (Very Soon) and Mrs. Olga Coetzer were the missionaries at Lorraine mission. Rev. Sentsho and Rev. Coetzer presented the gospel of Jesus Christ at that service which was attended by practically the whole tribe and many government officials and white neighbours from the district.[3]

Under pressure from her people Flora Letswalo later lost her faith and became a traditional diviner. However, the Mmamahlola people became open to the gospel and many churches began working among them. A Dutch Reformed Mission Hospital was established there. The Church of the Nazarene at Metz flourished. In 1996 Flora asked Pastor Reginald M. Malebati of the nearby Hlohlokwe Church of the Nazarene to pray with her. At that time she repented and returned to the Lord.[4]