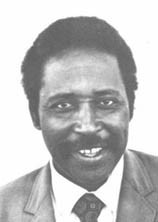 Rev. Dalton (Wilton) Chenchi Maenetja is the son of Josefa and Johana Maenetja. He was born at the homestead of Motšetene (Mapatene) near Sediba sa Tau (the Lion Spring). The totem of their tribe is the elephant, symbolic of the great influence of the Maenetja family in the community. Chenchi grew up on the Thabeng Mission and broke with a strong tradition of his people by not going through the tribal initiation school as a boy. He attended the Thabeng Mission School and went on to high school around the mountain at the Shiluvane Swiss Mission. During the 1940s Chenchi worked as a waiter at a country club in Pretoria.

His name was entered wrongly as Wilton instead of Dalton on his official identification document. Therefore he began using Wilton as his official name.

In 1944 he testified to being converted and then later entirely sanctified. After that he testified publicly that he felt God was calling him to the ministry. He made no firm plans however to enroll in Bible College. He decided rather to join the South African Police. When the day came for him to leave for training he went to say farewell to his father. His father reminded him of his testimony about being called to preach the gospel and asked Dalton to join him in praying about it. He did not join the police. [1]

He married Miss Sophie Mankwana Malapane (1930-1996) in 1952. She was born in Sophiatown (Johannesburg) and was the second daughter of Mr. Makhaya John and Mrs. Mapula Sarah Malapane. She also attended school at Thabeng Mission. Maenetja taught at Lorraine, Thabeng and Moime Primary Schools. Mankwana worked on farms in the area. God blessed their home with six sons and two daughters.

Pursuing God’s call to the ministry Maenetja worked with Missionaries Kenneth and Minnie Singleton at Thabeng preaching at various preaching points including Hobson’s Choice, Longridge-Tzaneen (Sekhokho), Khopo, Rooi Koppies, Politsi, Rantenburg, Letaba Estates, Mawa, Ramalema and Lenyenye. Sophie supported him faithfully in all of this work. As the family grew there were always urgent excuses why he could not go to Bible College for ministerial training. As the years went by it seemed as if he was missing the basic preparation for his calling. Missionaries and other workers prayed for him.

Shortly before his father died on July 12, 1963, he called his son to his bedside. Josefa Maenetja told Dalton that before he died he had one question that he wished to ask him: “Have my prayers for you, and those of your mother, been in vain?” Dalton Maenetja wept at his father’s bedside and promised him that those prayers were not in vain and that he was determined to obey God’s call. At the funeral on July 15 Dalton Maenetja went forward to pray at the close of the message by Rev. Paul S. Dayhoff, although no special invitation had been given. Then he arose and affirmed his decision to follow God’s call and enter Bible College the following year.

He did indeed enroll at Arthurseat Bible College in January 1964. Dalton was a keen student and completed the four-year course, graduating in 1967. He and Sophie left some of their children in the care of relatives and Sophie worked as cook at the college.

From 1968 to 1977 they pastored with the blessing of the Lord at Lenyenye (near Moime) and Kgapane (near Queen Modjadji’s royal homestead). Dalton Maenetja translated a large part of the Nazarene Manual into the Pedi language for publication.

Missionary Paul S. Dayhoff, with whom he used to play as a boy at Thabeng (riding donkeys, making clay oxen, killing poisonous snakes, trapping birds, catching locusts to eat, playing pranks, etc.), was holding tent campaigns in the Western Transvaal (North West Region) near Brits. One day in 1973 he stopped by unannounced at the parsonage at Kgapane and asked Maenetja if he could come and help preach for a couple of weeks at Mothutlung (near Brits). He agreed without hesitation, packed his bag, and in a few minutes they were on their way.

Dalton Maenetja was ordained in 1971 by Dr. V. H. Lewis and was appointed Superintendent of the new Bophuthatswana (Western Transvaal) District in 1977. This was in a sense a missionary undertaking for the Maenetjas as it involved working among the Tswana people. Although related to their own Pedi people the customs and language differed in many respects.[2] He retired on July 7, 1991, and returned to his home at Thabeng.

Then in 1992 Maenetja suffered a stroke and became an invalid. Even in the midst of suffering, paralysis and developing blindness, he had “not lost the joy of the Lord in his heart and … that sense of humour he [was] known for.” Visitors found inspiration and encouragement in his faith and fortitude.[3]

Their son Rev. Calvin Maenetja answered God’s call and has become a minister of the gospel. He and his wife, Joyce are pastoring the Thabeng Church that was founded by his grandfather.