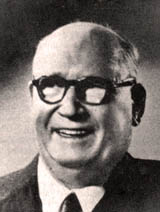 Daniel Francois Malan (May 22, 1874-February 7, 1959), statesman, clergyman, and journalist, formed South Africa’s first Afikaner government, of which he was prime minister from 1948- 54. A founder of Afrikaner nationalist parties, he was responsible for the implementation of many of South Africa’s apartheid policies.

He was born at Allesverloren, near Riebeek West, in the Cape Colony. After receiving an M.A. degree in philosophy from Victoria College, Stellenbosch in 1899, he continued his studies in the Netherlands, where he obtained a doctorate in divinity from the University of Utrecht in 1905.

Returning to South Africa, he served as a minister of the Dutch Reformed Church, first in the Transvaal, at Heidelbereg (1905), and then in the Cape, at Montagu (1906-12) and Graaf-Reinet (1913-15). During these years he visited his church’s missions in what were then Rhodesia and the Belgian Congo (1912). He also played a leading role in promoting the use of Afrikaans, displayed an active interest in university affairs and was a member of the deputation which tried without success, in December 1914, to get the government to commute the death sentence passed on the rebel, Jopie Fourie.

In June 1915 Malan left the pulpit to become the first editor of the Cape Town newspaper, De Burger, which was founded as the organ of the Nationalist Party, newly established by Gen. J. B. M. Hertzog.

Malan became the Nationalist Party chairman in the Cape Province in September 1915, and entered parliament in January 1919. It was also in 1919 that he was a member of the deputation which went to the Versailles Peace Conference, held at the conclusion of World War I, to seek a restoration of republican independence for the Transvaal and Orange Free State.

The Nationalist Party, together with the Labour Party, was victorious at the polls in 1924 and again in 1929. Malan, held the portfolios of interior, public health, and education throughout the period 1924-33. After Hertzog he thus became the second most important man in the Nationalist Party. In 1925 he was responsible for inserting a clause in the South Africa Act acknowledging the sovereignty and guidance of God. In the same year he piloted an act through parliament granting Afrikaans the status of one of the official languages of the Union. His handling of the Nationality and Flag Act aroused great controversy, before a compromise regarding South Africa’s own distinctive flag was reached in 1927. Dr. Malan’s Areas Reservation Bill, introduced in 1925, and his attitude that the Indians in the Union were an “alien and unassumable element” of the population, caused an outcry. A round table conference between the Indian and South African governments, however, led to the amicable Cape Town Agreement of 1927. A further controversial measure with which he was associated as minister of the interior was the Quota Act of 1931, which fixed an immigration quota for eastern European states from which many Jews were coming to South Africa.

In 1933 Malan and his supporters were opposed to coalition between the South African and National Parties, although they contested the 1933 election under the coalition banner. In 1934, when the United Party was formed, Malan and his followers broke away to form the “Purified” National Party, which became the official opposition. This party did, however, support Hertzog’s 1936 land and franchise bills. Malan’s position was strengthened after the 1938 general election. In September 1939 all members of Malan’s party voted for Hertzog’s neutrality motion.

A somewhat uneasy reunion between the followers of Hertzog and Malan was achieved in December 1939, under Hertzog’s leadership, and pressure was put on the government to make peace. After Hertzog retired from politics, the leadership reverted to Malan. Although rifts in the opposition remained, after the 1943 general election, Malan was clearly established as the leader of Afrikaner nationalism.

In 1947 Malan entered into an election agreement with N.C. Havenga, leader of the Afrikaner Party. In 1948, after the Nationalist and Afrikaner Parties had narrowly triumphed over the United Party led by Jan Smuts and its allies, Malan became prime minister and minister of external affairs. The policy of apartheid had been stressed during the election campaign and during Malan’s premiership it began to be implemented by laws such as the amendment of the Mixed Marriages and Immorality Acts, the Population Registration Act, and the Group Areas Act. His government became involved in a constitutional crisis when the Appeals Court declared its measures to remove Colored voters in the Cape from the common roll to be ultra vires (beyond legal authority). One of Malan’s other prime aims, to emphasize the Union’s independent status vis-à-vis the United Kingdom, led to the South African Citizenship Act and the adoption of a distinctive royal title as far as the Union was concerned. Although he kept the ultimate object of a republican form of government for South Africa in mind, his views on the issue were on occasion regarded as being too mild by his more radical followers. In 1950 he declared the Communist Party to be an unlawful organization in South Africa, and he sent a fighter squadron to fight on the United Nations side during the Korean War.

In 1949 he gave direct representation to the mandated territory of South West Africa (now Namibia) in the Union parliament, but failed in his attempt to incorporate the high commission territories (now the independent states of Botswana, Lesotho, and eswatini) into South Africa. During his premiership Malan visited London to attend Commonwealth Prime Ministers Conferences and the coronation of Queen Elizabeth II; he was also one of the first leaders of any state to visit Israel.

In 1951 the Afrikaner party became incorporated in the National Party, and Malan’s position was further strengthened after the 1953 general election. On November 30, 1954, Malan retired from politics, the first South African premier to take such a step while in office. His wish to see Havenga rather than J.G. Strijdom as his successor was not realized. He died at Stellenbosch.

B. Schoeman, My Lewe in die Politiek, Johannesburg: 1978.