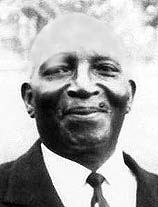 Pastor Richard P. Mamiane was a faithful Christian builder and lay pastor, a pioneer in the early mission printing press and a pioneer missionary to the Gananwa people at Blouberg.

His father was Mr. Petros Mamiane and his mother was Mrs. Meliya Mamiane(?-1971). She was one of the first Nazarene converts in Mpumalanga.[1] Richard Mamiane was from the Sabie area and heard God’s call in 1929 to change his way of life. In 1933 he again obeyed God’s call to give up a lucrative job at Glynns in Lydenburg to work at the Nazarene mission press at Sabie.

He moved to Arthurseat when the press was relocated there in 1935. His friends all told him he was being completely foolish as the mission could not pay high wages. It was a difficult year when in 1938 he was left to operate the press alone. He said he prayed for God’s help night and day.[2]

Richard Mamiane was an efficient, hard worker. He was in charge of building and maintenance at Emnombeleni (Arthurseat mission). He also built most of the first church and parsonage buildings in the Mpisane (Southeastern Lowveld of Northern Province) area with the help of the missionaries and Nazarene contributors from North America.[3]

In 1949 he accompanied Rev. George and Mrs. Jeanette Hayse, the first missionaries to open work at Ga-Malebogo, Blouberg, toward the north of the Northern Province. He stayed for several years as builder and evangelist. The language was not a big problem as his home language was a dialect of the same Northern Sotho or Pedi language as was the Gananwa language.

His wife, Mrs. Leta Mamiane (1914 -?), was a willing helper in the hospital although she suffered from hypertension. She knew the Lord and always faithfully attended the early morning services with the patients. [4]

Mamiane returned to pastor for a number of years at Emnombeleni Church. He always encouraged very generous harvest offerings. In 1961 he went to pastor at Champagne. After pastoring at Islington (Khokhovela) he retired in 1974.

After Leta passed away he married Miss Grace Nukeri (1925-) of Zoeknog Church of the Nazarene in 1960. She had found the Lord at the age of eleven. In 1942 she felt called to be a nurse and went for training at the Nursing College at R.F.M. Hospital, Manzini, eswatini. In 1959 she began working at the Ethel Lucas Memorial (Tintswalo) Hospital at Acornhoek, Eastern Transvaal (Northern Province) as a staff nurse. In 1967 she was transferred to the Islington Clinic about twelve miles to the east of Acornhoek. She continued to be in charge of the Islington Clinic until she retired from nursing in 1990 because of ill health.

After the death of Pastor Richard Mamiane in 1978, Rev. Grace Mamiane continued to pastor the Khokhovela Church very successfully until her own retirement in 1996.