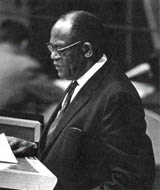 Though his family came from Botswana, Mathews was born in Cape Colony (present-day Cape Province), South Africa. He graduated in humanities at University College of Fort Hare, South Africa, in 1924, then studied anthropology and law at Yale and at the London School of Economics under Bronislaw Malinowski. He taught at Adams High School in Natal and for twenty-four years was lecturer in social anthropology and native law at Fort Hare. He was active in the Council of Europeans and Africans for Interracial Harmony in Durban and with the Native Bantu Teachers’ Union. In 1936, when the Native Representation Bill removed Africans from the common voter’s roll, he served on the Native Representative Council and was active in the African National Congress (ANC). In 1952-1953 he was the Henry W. Luce Visiting Professor at Union Theological Seminary, New York. He also served on the royal commission that investigated higher education for Africans in Uganda, Kenya, Tanganyika (Tanzania), and Anglo-Egyptian Sudan.

At the ANC’s Cradock Congress in 1953 Mathews broached the idea of “a national convention (of all races)… to draw up a Freedom Charter for the democratic South Africa of the future.” His draft of the Freedom Charter was adopted in part by the 1955 congress of people. In these activities he was a collaborator with African political leaders such as Albert Luthuli and Alphaeus Zulu. For these activities he was charged with high treason in 1956 but acquitted in 1962. From 1966 to 1968 he was Botswana’s Ambassador to the United States and permanent representative to the United Nations.

After involvement in the Cottesloe Consultation in 1960, Mathews served as Africa Secretary of the Division of Inter-Church Aid, Refugee and World Service of the World Council of Churches. In that capacity his report, Africa Survey, addressed the refugee situation created by Christian-Muslim conflict in the Sudan and the Congo crisis of 1962-1963. His efforts sensitized the United Nations to the extent of the refugee situation. In his ecumenical career he served on the planning committee of the WCC Evanston Assembly in 1954. He was also active in the All African Conference of Churches. At its first assembly in Kampala in 1963, he chaired the constitutional committee.

Willem Saayman, A Man with a Shadow: The Life and Times of Professor Z. K. Mathews (1996).