1982
Church of the Nazarene
South Africa 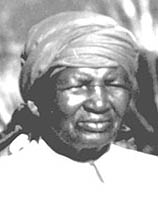 Elizabeth Mohoti was one of the very first converts at the Blouberg Mission, north of Pietersburg in the Northern Province. She brought her baby to the newly-established dispensary and on August 28, 1949, knelt under a morula tree and was saved. Later she testified to being filled with the Holy Spirit and she continued to grow in the Lord.

She had had a difficult life. Her husband was very cruel to her at times. Once, she came to the hospital for help with a broken arm. She had two daughters and a son. Her son’s name was Willie so she was known as MaWillie. She showed her courage and caring when she made the difficult two-and-a-half-hour climb up the mountain to the Malebogo Royal Homestead to present a Pedi Bible to the paramount chief.[1]

When her husband died, she refused to permit the ceremonies of a traditional doctor. She appealed to the chief to be released from these and other nonChristian traditional obligations. She was the first woman in the area to stand for the truth as a Christian in such a way as this.[2]

She was active in visitation evangelism. Many found the Lord and came into the church through her testimony and example. The congregation called her “Beloved” because she loved everyone so much. She led a women’s prayer meeting and taught them to sew. She taught Sunday School and was a successful worker and leader among adults, young women and children.

Elizabeth Mohoti faithfully walked to the services and arriving early sat under the tree reading her Bible while waiting. She never missed a revival service. She was a saint who prayed daily for the Lord’s work and for pastors and leaders around the world.

In her old age, Mrs. Elizabeth Mohoti went to live with her grandson at Bochum and rejoiced in the opportunity to start a new preaching point there. Her testimony remained vibrant and alive. She prayed with women at the altar and counseled them wisely. Until she was transferred to heaven, she continued to send her tithe back to her home church at Blouberg. She became blind but was victorious in her last days, knowing she would soon be with the Lord. She went home to heaven on September 17, 1982.[3]