1916-
Church of the Nazarene
South Africa 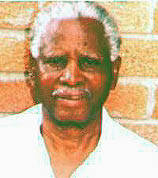 Rev. Johanne Patisa Mthethwa is a pioneer preacher from the International Holiness Mission in the southeast of Northern Province. His father was a chieftain and had fifteen wives. He had migrated to the southeastern lowveld of the Northern Province from Mozambique with Chief Mpisane in 1898. Patisa’s home was at Exeter and he had relatives at Hokwe. All he knew of religion was the traditional Shangaan ancestral worship and the rituals, practices and superstitions that it involved. He was chosen to be dedicated to the ancestral spirits.

As a boy he followed the usual spartan, dangerous and arduous traditional lifestyle in the bush, herding cattle. It included raiding gardens, hunting small game, trapping birds and collecting flying ants, caterpillars and beetles to supplement the home diet. The boys played games and fought. They were severely whipped if any cattle were lost or if they invaded the gardens.

Living next to the Kruger National Park they were often exposed to dangerous predators such as lions and leopards. His brother, Samson, was once caught by a lion and escaped by playing dead until the lion left him. One night Patisa chased away what he thought was a dog from the cattle kraal. Next morning they found from the tracks that he had chased a lion.

In 1930 a missionary, Rev. Charles Hapgood Strickland, one day illustrated sin and salvation by clearing a glass of red water with a chemical. This helped Patisa to find the Lord. He took the name Johanne. At home they just made fun of him when he tried to testify.[1]

Seeing the spiritual need of his own family, he prayed much for them. While he was praying under a tree one day he sensed God’s call to the ministry. He tried to gather his people together to speak to them Sunday mornings before they became drunk. He used a New Testament that his father had left, having at one time started to be a Christian. As Mthethwa prayed for his family, his brother Paul repented and then another brother, Knife, also found the Lord.[2]

While attending Rehoboth Bible College (near Johannesburg) about 1935, a visiting minister from Mozambique, Rev. Daniel Tivane, preached on how Daniel kept himself pure as a captive in Babylon. Mthethwa found the fullness of the Holy Spirit that could keep him too. In 1940 he married Miss Katie Mnisi (1921-) from the mission at Cottondale.

In 1946 Mthethwa rode his bicycle through the Kruger National Park to Mozambique and back in order to visit Rev. Jona Mahleyeye, Rev. Luti Mulate and the churches there.

The Mthethwas pastored at Acornhoek and then at Carolina on the highveld. They were happy to become Nazarenes in 1952. In 1955 he was ordained by General Superintendent Samuel Young and was called to be the district leader in Johannesburg. After leaving Johannesburg they pastored at Witbank from 1964 to 1967. After that they were called back to pastor the Acornhoek Church at the mission hospital.

Johanne Mthethwa had great preaching ability. He had deep insight into interpersonal problems, great compassion and patience. By God’s help he was very successful in the ministry.[3] He did not compromise with traditional religion. [4]

At Carolina the Mthethwas met with much opposition. A man from another denomination named Msumi threatened to kill Mthethwa with his kierie (stick) because he preached on sin. Soon after arriving there the farmer gave him twenty-four hours notice to leave the house where he was living. With permission from an Afrikaans farmer he was able to live at a nearby settlement in a tent. People began to repent and a church started. He once prayed for a man who was a drunkard. The man said he saw Mthethwa in a dream and that helped him give up liquor and tobacco.

While living at Orlando (Johannesburg) there was a knock at the door one night in 1961. He was alone with the children. Pulling back the window curtains he saw that the visitors were tsotsis (gangsters). They demanded that he open the door. He knew such men only came to rob and kill so he refused, but presently they returned with irons, two at the front door and one at the back door. They said they would break down the doors if he did not open to them. He asked them to wait a few minutes while he prayed with his children.

The men were quiet. Mthethwa prayed briefly, “Lord if I die it is all right; if my work for you is finished it is all right.” He also prayed for the visitors outside and then opened the door. As they entered, the leader put his gun in his pocket and called the man at the kitchen door to come to the front. He said to Mthethwa, “No, Preacher, we are looking for someone called Molefe, not you.” They gave money to the children and left.[5]

While they were at Witbank they saw great revival and growth in the church. Mrs. Grace (Maluleka) Zwane (1933-) from Johannesburg and a missionary evangelist, Rev. Jack L. Riley, were greatly used of the Lord there in 1965.

When the Mthethwas returned home in 1967 to pastor at Acornhoek and be chaplain in the hospital, Katie became paralyzed. From 1974 to 1977 she was a complete invalid and he had to do everything for her. The Lord wonderfully answered their prayers and after five years she recovered completely.

In September 1971 there was an exceptional time of revival at Acornhoek when Rev. Juliet Ndzimandze from eswatini came to preach. Following this Benjamin Silinda erected a large tabernacle on his premises at Greenvalley and began preaching. His lorries (trucks) brought people in from far and near. An eminent traditional doctor, Wiklif Mathebula, found the Lord and all of his demonic paraphernalia was burned in a great burning service. Later another doctor, Abina Chiloane, and two others also had their things burned. Great crowds of people attended these burning services which were conducted by Rev. Johanne Mthethwa and Rev. Enos Mokoena.

A large number of people from all over the district were delivered from demon possession in the revivals that followed and they brought their demon-things to a great burning service that was held at the Arthurseat Mission on 26 August 1973. The doctors who had previously been delivered testified along with them of God’s great power to deliver. About fifteen hundred people gathered for this great meeting.[6]

Rev. Johanne and Mrs. Katie Mthethwa retired in 1987 and lived at home near the Acornhoek hospital and church. A great source of blessing for him he says is that he continually meets strangers who come up to him and say, “Do you remember me? When I was sick in hospital you prayed for me and helped me” or “I found the Lord there” or “My wife found the Lord.”