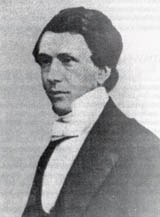 Andrew Murray, Jr. was a South African Dutch Reformed Church minister, theologian, evangelist, and mission organizer. He was the second son of Andrew Murray of Graaff-Reinet; four of his brothers also became ministers. He was the prime shaper of the piety that came to characterize the Afrikaner people in the twentieth century. In 1838 he and his brother John were sent to Aberdeen to be educated at the grammar school and university. They then went on to Utrecht, Netherlands, to study theology. Virtually ignoring their professors, their piety and theology were shaped by membership in student societies inspired by the Reveil, a continental revival movement. After ordination at the Hague in 1848, Murray returned home where he was sent to minister to the Voortrekkers beyond the Orange and the Vaal Rivers. For ten years he served this 100,000-square mile parish, befriending the extremist leaders Potgeiter and Pretorius and aiding them in negotiating their freedom from the British. In 1856 he married Emma Rutherford. The next year saw the first of his 250 publications, some of which were the only books in many Afrikaner homes except for the Bible. He became minister at Worcester in 1860, Cape Town in 1864, and then Wellington in 1871, where he stayed until his retirement in 1906.

Murrary’s influence on South Africa’s Dutch Reformed Church cannot be exaggerated. He was on its initial foreign mission committee and organized and raised funds for its first mission. In 1877 he organized the Mission Training Institute at Wellington. He founded three key organizations: the Ministers Missionary Union, The Bible and Prayer Union, and the Layman’s Mission League. He was also an effective evangelist, both in South Africa and abroad. He received honorary degrees from Aberdeen in 1898 and the University of Cape of Good Hope in 1907.

Murrary led a movement that transformed his church from an introverted into a missionary institution, but he also helped to confirm it as the church of the Afrikaner Volk, inadvertently setting it on the path that led to apartheid.

Murray’s two most important books are The Key to the Mission Problem (1901) and The State of the Church (1911). J. du Plessis wrote a massive but now dated biography, The Life of Andrew Murray of South Africa (1919).