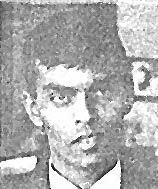 Nana Naidoo was the first pastor to be called home from the Natal District. He was born in Durban into a staunch Hindu home. He dropped out of high school as he could not afford clothes and books. At sixteen he was working at a hotel where he began drinking heavily. He lost his job and for a year he had no employment because of his habit of failing to turn up for work.

He joined a gang with his street friends and took drugs and gambled with them. When drugged or drunk he was violent with people. Becoming an addict he sold marijuana on street corners and made his home in a manhole along a street. When in trouble with the police he rotated between living in Johannesburg and Durban. He described his life, “I never knew of loving anyone. I hated the world and people. Nobody used to love me.”

One Friday evening in 1971, he and some friends passed a big blue and yellow tent on a street corner. Nana suggested that they go in and see what was happening. They sat in the back and were soon singing beautiful songs. They thought the people were gathered just to have a good time. Then when there was prayer they realized it was a religious service and they wanted to leave, but the tent was too crowded. They listened as Rev. Mike Porthen preached.

Nana felt a repeated urge to go forward at the invitation. He explains: “I told Jesus that if He could help me I was coming to accept him as Saviour. I cried at the altar for Jesus to forgive my sins. The pastor prayed with me for a long time and I gave my heart to the Lord. I could not sleep that night as my heart was so filled with love and peace.” His friends at work thought he was joking when he told them what had happened. His family rejected him.

Nana joined the Church of the Nazarene, found new friends and was reunited with his family. In 1972, at a Wednesday evening prayer and fasting service, he felt the Lord very near. In bed that night he heard the Lord’s voice, “Go preach my Word.” A few days later he responded: “God, if you want me to preach Your Word, here I am.” He told his pastor about his call and was instructed to go to Bible School. He graduated from Bible College in Cape Town in 1976. He and his wife, Mrs, Maliga (Perumal) Naidoo, pastored at Isipingo but he had only two years to serve.

He became seriously ill and passed away in hospital from kidney failure. Rev. Mike Porthen related that the night before he died Nana had said, “I’m ready to go. I’m going to beat all the other pastors to heaven.” He told his wife, “Heaven is calling me.” A member at Isipingo who found the Lord through Nana’s ministry prayed, “Lord, although Pastor was a little short man he was a giant to us because he was not afraid of the devil. He was saved from sin and now stands among the angels.”