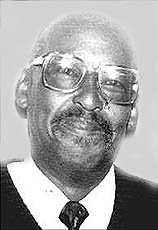 Joseph Emmanuel Nathan was a born and bred Capetonian. When he was about eleven years old Joseph had a remarkable experience. He hitched a ride by jumping onto a vehicle passing his house, and he hung on between two trailers. The road was bumpy, and somehow he lost hold and fell under the second trailer. He lay on his back not knowing what to do. After what seemed like an age he saw the left back wheel of the trailer approaching his head and was paralyzed with fear. Then what seemed like a giant hand flipped him over onto his side and the wheel scraped his back. He says, “Naturally I did not see the giant hand but I felt it. I then realized that it must have been God.”

Joseph’s parents were nominal Christians in the Congregational Church, where he was baptized and confirmed. As a child his father always picked him up when he arrived home from work, set him on his lap and sang “Rock of Ages.” This made a profound impact on his young life as he regarded both of his parents as saints.

Joseph had a turbulent youth as a member of a gang called the Cluster Buster. Through those years he was involved in gang fights and had many narrow escapes from rival gang members. Such escapes helped him believe that God was with him. He was involved in some serious crimes and found himself in trouble with the law. This shook him so much that he promised himself that he would turn over a new leaf, but he was never able to do that in his own human strength. He also narrowly escaped drowning in Table Bay after a drinking binge.

He married Roseline Rusdien (1935-) in the Anglican Church of the Province in Bree Street, Cape Town, on June 13, 1953. Rosa was also born and grew up in Cape Town. From a Moslem background, she was a shy and unassuming young girl when Joseph first made her acquaintance. Her father was a staunch Muslim and her mother, known as Auntie Katie, was a cook at the Phoenix hotel. Rosa had attended Sunday school at the Docks Mission where she heard about Jesus.

In 1969, Dick Booysen knocked on the Nathans’ door during house visitation one day, and that evening Joseph Nathan attended a Church of the Nazarene for the first time. That day he gave his life to Jesus and received the baptism of the Holy Spirit.[1]

Under the ministry of missionary Raymond Thorpe, preacher at the Factreton Church, Nathan responded to the prompting of the Holy Spirit to totally commit his life to God. After a few years he was elected Sunday school superintendent, and three years later he felt the calling of the Lord to full-time ministry. As he began to come to terms with the Lord about this he grew restless. He began praying and reading Scripture to find something that would indicate that this was indeed God’s will for his life. Then, one day, he heard a soft voice saying, “Bybel Skool.” At first he thought his imagination was playing tricks on him. He explained, “A sense of calm and joy entered my heart, and then it dawned on me that God and the Holy Spirit had indeed answered my prayers. I resigned my job, made the necessary application, was accepted, and off I went to Bible College.”

After his training he and Rosaline began pastoring the Hanover Park Church in November 1978. In 1980 Joseph Nathan was ordained by general superintendent Orville W. Jenkins. There had been three prior pastors at Hanover Park but the work was in shambles. The people were scattered and there was no church building. It was a daunting task for a young pastor and Joseph had to commute from his home in Factreton. After two years, thanks to financial help from the general church, a manse was built and then a church building. This church became a thriving community with about two hundred members.[2]

On many occasions, when the Nathans did not have enough money to buy food, God heard their prayers and miraculously supplied for their needs. When the church was struggling financially, they refused their salary in order to help the church. Even under those circumstances God was always faithful to give them just what they needed and they never went to bed hungry.[3]

Roseline was very supportive of Joe’s ministry over the years. She lead a women’s prayer group twice a week, taught a wayside class, and was superintendent of the Sunday school program which drew over 1,000 children. She devoted one day a week to ministering to those who were discouraged or who had had a spiritual lapse.[4] The Nathans had seven children.[5]

Rev. J. E. Nathan passed away on March 2, 2000 from a heart attack while touring in Israel. The funeral was on March 11 in Hanover Park, Western Cape, South Africa. He had pastored the Green Pastures Church at Hanover Park for twenty-one years.