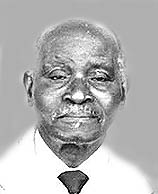 Nelson Thutha Ngobeni was born at Greenvalley, Acornhoek, in the lowveld of southeastern Northern Province, the son of Johane Ndzhanga Ndhabezitha Ngobeni. He met people from the Church of the Nazarene when he was about ten. One Sunday, in about 1921, the pioneer missionary Sibhaha (Harmon Schmelzenbach) from eswatini, visited their homestead riding on a white horse. Many were drunk but Nelson determined to serve God before sunset that day. After that, the sunset continually reminded him of his promise.

His parents worshipped the ancestors. As a boy he herded cattle and goats but he disliked the fighting that went on among the herdboys. His father told him he would go mad if he went to Sunday School but he decided that it was ancestral worship that brought madness to people. One day he truly repented and began to witness for the Lord.

Ngobeni went away to Johannesburg to work and totally drifted away from the Lord although he remained a church member. But God followed him. One evening, he arrived at the railway station in Pretoria at about 7:00 and was gripped by great spiritual darkness. He was so troubled that he went out under a tree and prayed until 10:00 p.m. He surrendered to Jesus and left with great joy. He said, “God really cleansed me.”[1]

In 1938, he married Miss Lucy Makashula Silinda (1921-) in the International Holiness Mission church at Cottondale. She was born at Buffelshoek near Acornhoek and was the eldest daughter of Five and Juliah Silinda. God blessed them with two sons, Wassenaar and Kenneth. In 1942 they moved to the Pretoria area where they lived until 1961.

In 1952, Ngobeni felt God calling him to the ministry. The problem was that he was making good money working and there was little remuneration in the ministry. However, he felt a great burden for his people who did not know God.

While at Vlakfontein, Pretoria, Ngobeni was part of a Nazarene congregation that was just beginning. Mr. Philemon Khoza was a new member that had come to them from the Swiss Mission nine months earlier. His great ministry was faithful visitation evangelism but he also planned to enroll in Bible College. During one visit, Khoza was given tea at a certain home and it cost him his life. Although it was great loss to the little congregation, he left them and Nelson Ngobeni a great example of Christian commitment.[2]

Nelson Ngobeni surrendered to God’s call and enrolled at eswatini Bible College in 1961. Lucy was in the church for many years without the experience of salvation. By God’s mercy, her spiritual eyes were opened in 1958. She became a great helper and companion to her husband in the ministry. He and Lucy pastored at Jabavu (Soweto) and then for eight years at Saulsville, Pretoria. Some young men in his church were called to the ministry. After that, the Ngobenis continued to minister successfully in the eastern district at Okkernootboom, Rolle, New Forest, Cottondale, and Timbavati. Upon retirement, they settled at Thulamahashe.[3] God used Rev. Nelson Ngobeni greatly in widespread evangelistic campaigns.

Lucy was moved by the Holy Spirit to visit many individuals and places. Starting in 1964, she felt a special calling to home visitation and preaching. Her special gift was personal soul winning and she was a prayer warrior. In 1993, she started the Katekani Church and began pastoring the Cottondale church in 1995. It was reported, “She has taught the church how to pray and it is growing. There are informal prayer meetings in the church from 4:00 o’clock every morning.” She led her mother Julia to the Lord before she was laid to rest. She led her younger brother Pastor A. Silinda to the Lord. Her son Wassenaar knew the Lord in fullness because of her encouragement and prayers. In 2001, Rev. Walter Tshabalala reported: “She is growing old but her vision for souls is growing beyond our imagination. I am encouraged by her life. She seeks God’s face and continually communes personally with Him.”[4]

Nelson Ngobeni’s son Rev. Wassenaaar Ngobeni became a pastor, principal of a school, then a district superintendent. In 1999, he accepted the assignment as Jesus Film Programme Coordinator for the Africa South Field.