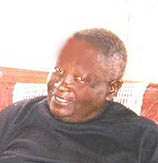 Hannibal Sebati lived at Datatšu, Blouberg, although the family was originally from GaMolepo in the Pietersburg area. He was the interpreter for missionary James Graham in the Blouberg area and it was through this that he found the Lord in December 1949. He felt God’s call to the ministry and enrolled at Siteki Bible College in eswatini in 1951. After graduation he pastored at the Nazarene Church near Naboomspruit and was the teacher in the mission school there.[1]

Missionaries Paul and Margaret Dayhoff were at the Blouberg Mission in l956. This was over one hundred miles from Naboomspruit, but they had the oversight of the Naboomspruit Mission. At their first visit they left a large bag of mealie (maize) meal. Everyone thought that this would be adequate for the students’ food for the ensuing month. But as Sebati expressed it, “The boys ate like locusts and the meal diminished rapidly.” A week before the end of the month, the bag was empty. The boys had been urging Pastor Hannibal Sebati to go to town and telephone missionary Dayhoff for help. He did not deem it right to do that and said this was a problem they needed to pray about. The next morning at the usual dawn prayer meeting their prayers were extraordinarily fervent. They went to classes without breakfast.

About mid-morning they heard a car coming up the hill. “Could this be the Dayhoffs coming?” they wondered. But no, it was Rev. Lawrence C. Ferree, a nearby Nazarene resident who was greatly interested in the mission. Sebati went out to greet him as the car drove up to the school. “Do you need any food?” asked Brother Ferree. “My! Do we ever need food!” came the reply. Brother Ferree told how he had difficulty sleeping the previous night. He kept waking up and had the distinct impression that he should take some food to the mission school. “I’ve brought you half a bag of mealie meal. Get some of the boys to unload it from the trunk.” This incident did a lot to strengthen the faith of those boys. Two of them, Samuel Sebola and Johannes Chabalala, went on to become preachers.[2]

In 1958 Sebati was sent to Laaste Hoop, GaMolepo, to begin the Makapea Church there. With the help of the new congregation he soon built a church building and he travelled many miles on his bicycle to Middelkop several times a month to lead the congregation meeting there under a tree.

Sebati tells of an experience in which God helped him in a special way. He was away and needed to get back home. The bus he was travelling in was delayed and he missed the connecting bus to take him home. He was stranded so he took another bus that went another way and would take him close to home. This bus was stopped by a flooded river. It took a detour and caught up with the original bus he had planned to take but had missed. By now he had no money left and the bus driver refused to take him without the proper fare. In despair, Sebati walked behind the bus, placed his head on it and prayed for help. The driver came around to him and said that he would take him if he would help to load and unload the baggage of the passengers. In due course he arrived home without being called upon to help at all. He said he has never forgotten God’s answer to his prayer that day.[4]

On February 27, 1960 Hannibal Sebati married Miss Isabel Mgwenya, daughter of the pioneer leader of the Church at Acornhoek, Eastern Transvaal. That same year they moved to the Gauteng area and were sent to KwaThema, Springs, to hold a tent campaign and begin the work of the church there. There was not a single adherent there at the time. When the tent was pitched Sebati entered it and prayed for food. He met some young men that were passing by and they became his first converts. God blessed the church in a wonderful way and regular services soon began. Within a year the new church was fully supporting the Sebatis. In 1961 Hannibal Sebati was ordained by General Superintendent, Dr. G. B. Williamson. He was a powerful preacher of the gospel and God greatly blessed his ministry.

By January 1964, Sebati was receiving the highest salary at Kwa Thema of any preacher on the district. He requested to go to Potchefstroom to begin a church there. It was a hundred kilometres away from the nearest Nazarene pastor.[5] That same year Sebati was chosen as the African leader of the district, having been secretary of the District Assembly. In 1965 he became the first superintendent of the Southwestern District. He continued in this position until 1973 when he left that district and accepted a call to be pastor of the Blouberg Church. Within a year of his arrival there this congregation became self-supporting. In 1976 he became the superintendent of the Eastern Transvaal District. He continued to be re-elected to this position until he was obliged to retire from the ministry in 1983.

The Sebatis had two children, Sidney and Patricia. Patricia was twenty-two years old when, in July 1984, she died suddenly while in school near Laaste Hoop.[6]

This article is reproduced, with permission, from Standing Stones of Africa: Pillars of the Faith in the Church of the Nazarene, First Edition (Limited), 2006, copyright ©2006, by Paul S. Dayhoff. All rights reserved.