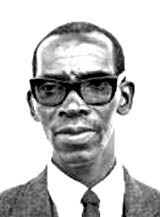 Alfred Dledleni Selepe was a pioneer on the Southwestern (Gauteng) District. He was born on March 28, 1928 at Vosloorus (Boksburg, East Rand). He married Josephina M. Dibetso (1930-) from Statonville (Boksburg) and they had eleven children. Selepe belonged to the Bantu Baptist Church and attended faithfully but he was enslaved by sin. He did not know that sins could be forgiven.

In 1950 he began to feel strongly that something was lacking in his life but he could not find the problem. Along with Mr Alpheus Nobela he wrote to Manzini, eswatini, in 1951 requesting to join the Church of the Nazarene. Missionary Charles Jenkins and Rev. Gideon Nkambule from eswatini, who were ministering on the Rand, came to visit them.

In 1960 he wrote, “I saw I was a sinner and humbled myself. I believed that the Lord Jesus forgave my sins. He delivered me from the slavery of sin. They showed me the wonderful love of God and I began to clearly realize that I was dead in my sins.”

He continued, “I cannot forget the year 1954 when the Lord poured fire into my heart and filled me with the Holy Spirit, Hallelujah! I now have peace. I have joy in my heart continually. The Holy Spirit rules all the time.”[1] He was scorned by his nonChristian friends but Selepe was serious about being a Christian. He and Josephina started churches in Boksburg and Edenvale.

In 1957 they went to Bible College at Siteki in eswatini and after completing their training they started a ministry at Odendaalsrus in the Orange Free State in 1959. At first they lived in a tent that often blew away in the high winds and everything was soaked with rain. Eventually they were able to get a house to live in.

One night a middle-aged lady, one of their first converts, came for help as her sister-in-law was sick and near death. They went and prayed for the sick lady and asked her if she believed that the Lord could help her. They could barely hear her answer but as they prayed they felt the assurance of God’s help. They returned home at two in the morning.

At 5:00 a.m. the lady who had called them was knocking on their door saying, “The sick lady is up and sweeping the floor.” The Selepes rushed over to their house. She believed that the Lord had touched her and she found the Lord right there and has remained a faithful Christian.[2]

The Selepes then moved to pastor at Jabavu (White City in Soweto). Selepe was ordained in 1965 by General Superintendent Hugh C. Benner. In 1967 they went to serve at Thusanang (Witbank, Mpumalanga) and then back to Jabulani in Soweto.

While the Selepes were pastoring at Jabulani in 1974 a car went out of control and crashed into their home. Two children were killed and their youngest boy, John, was badly hurt. In 1986 John was stabbed to death.[3]

Gangsterism was rampant. These tsotsis (gangsters) murdered without provocation. They lived on what they got from their robberies and assaults. No woman or girl was safe.

Missionary George Hayse writes: “Sitting in our large gospel tent at Jabulani one Sunday night, listening to the message, I saw the crowd suddenly become a screaming mass of stampeding people, rushing toward the platform. Two young men, smelling strongly of marijuana and liquor, were slashing at each other with knives. Soon a knife was in the shoulder of one. Though the attacker fled, the wounded man’s gang soon overtook him outside the tent, and murdered him on the spot.”[4]

In 1974 Selepe became superintendent of the Gauteng District and served for ten years. The district grew from having twelve to having twenty-eight trained pastors during that period. They first lived in Orlando East and later at the Phiri Church. A pension plan was started for pastors and a bookstore was opened in Soweto.

He was patient and forgiving and helped build a good relationship between pastors and people on the district. Selepe set an example of hard work and was often involved in manual work such as painting to help the churches and pastors. He was always encouraging and never avoided problems. He faithfully visited the congregations that had no pastors and always preached the message of holiness. Home visitation was important to him and he encouraged cottage meetings telling the pastors that every home needed Jesus. He was highly respected on the district.[5]

On Friday, March 27, 1981, Alfred Selepe was attacked by two young men. He suffered eleven stab wounds but recovered at home after treatment in hospital.[6]

In 1988 the Selepes went to assist in pioneering the new district in the Orange Free State. In 1996 Alfred Selepe became superintendent of that district. He retired at the end of 1998.

Alfred Selepe went to be with his Lord on September 6, 2009 after a short illness.[7]