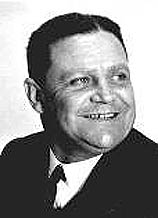 Pastor Hendrik J. Senekal was an assistant minister in the Dutch Reformed Church, but he had always felt that there was a deeper experience of grace than he had found. He heard about the Church of the Nazarene through the radio program, “Showers of Blessing.”[1] As a result of polio which he had contracted as a child, he was paralyzed in both legs and was confined to a wheelchair. An African servant would push him, and carry him, when necessary, wherever he went.

On one windy, drizzly day in 1949, he travelled the thirty-five miles from Pretoria to Discovery (West Rand), in his invalid chair with an African in attendance, to visit the pioneer superintendent, Charles H. Strickland, to find out more about this new church. As a result of this visit, Hendrik Senekal became the first licensed minister in the new district. The license was granted through the Michigan District.

Following special services in Jan Smuts Hall, he was appointed as pastor of the newly organized congregation in Pretoria that year. Mr. and Mrs. Willem Richards found the Lord during those services and they became the first non-ministerial members in the new district. They remained faithful through the years in the Pretoria Central Church.

At times, Mr. Willem Richards would push the pastor in his wheelchair all the way to the church in the suburb of Capital Park and then carry him into the church. In the beginning days, when the rest of the Richards’ family were not able to walk the whole distance and when nobody else came to service, the two of them would have prayer together and then travel the whole distance back home again.

When the church building in Capital Park was sold and before the new one in Pretoria Gardens was built, the congregation met in the lounge of the Richards’ home. By that time, other families had joined the congregation. Mrs. Welma David, daughter of Mr. Willem and Mrs. Marthina Richards, reports that through the ministry of Pastor Hennie Senekal these were the most blessed times that they experienced in their old home.[2]

After several years, Uncle Hennie, as he was called, was forced to retire from the active ministry due to poor health. He continued to assist, as he was able, in the Pretoria congregation.[3]