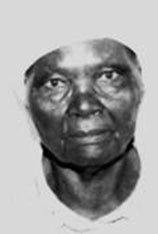 Freda Hlalaphi Simelane was born and grew up near Pigg’s Peak, eswatini. Enos Mokoena and other Nazarene workers and Bible School students used to visit the homestead where Simelane stayed far away in the mountains. It was only accessible by means of a difficult donkey trail. After her father left her in 1927, Simelane went to the Nazarene girls’ school at Endzingeni with Robinson (Dulile) in 1930 and there she became a Christian. Once when Samuel Dlamini, the local pastor, made a plea for them to listen for God’s call to the ministry, she prayed and felt a strong desire to be a worker for the Lord.

In 1935 Simelane’s family moved to Nelspsruit in Mpumalanga, South Africa, and was thus unable to return to school at Endzingeni. As there was no Church of the Nazarene at Nelspruit at that time she joined another Church. She and her mother, Dorcas (1897-1958), sang songs at home from Ezokudumisa, the Nazarene Zulu hymnal. Freda had not forgotten the call she had felt to work for the Lord. She had a recurring vision of a great field with many people like the stalks of maize ready for harvest.

In 1942 her family moved to a rural plot near Witbank. In 1944 her mother started a business to support the family, and Simelane went to sell things in a compound that housed men working in the coal mines. One day while she was selling things near the mine, she met Mose Macamo (c1894-1948) who was witnessing for the Lord and said he was a Nazarene. Simelane recognized his Ezokudumisa hymnal and she told him that her Mother was also a Nazarene and showed him where her home was. The family had forgotten about this incident when weeks later, on a hot day as they were sitting outside in the shade, Macamo came riding up on his bicycle to visit them. They invited him to stay and eat with them, and as they compared notes about the missionaries they knew, they began to trust one another as truly being part of the Church of the Nazarene.

Macamo was a Christian from Mozambique who worked at the Middelburg Coal Colliery. He arrived there in 1938, and every day after the evening meal, he would step outside of his room and begin singing hymns. When a crowd of men gathered he would read the story of salvation from the Gospel of John. As he did this, he quickly found three other Christians. On Sundays, he preached in at a worship service near where they lived and then travelled on his bicycle to the Coronation Colliery at Witbank, about twenty miles away, where he had found a group of Christians. This was a group of Nazarenes, and their leader, Petrus Coza, invited him to join them. After learning about the church Macamo found he needed to marry a proper Christian woman. He began visiting other compounds and met with groups of Christians at each place. He had rare gifts of diplomacy and insight that helped him disciple and encourage these groups of believers. His superiors at the mine said that he knew by name each of the five hundred men living in the compound where he stayed. He was appointed overseer of the Nazarene work in that area and by 1940 Macamo was ministering to groups of Christians in compounds at six different mines.[1]

From time to time Macamo made brief visits to his home back in Mozambique. Between these visits he worked incessantly for the Lord. Some of the men were living in the Thushanang African township at Witbank amidst conditions of poor housing, drunkenness and immorality. Macamo had also begun to have services with them. It was at this time that he met with Freda Simelane and her mother. Macamo often visited them and brought them gifts of meat and potatoes. In 1945 Simelane and her mother began attending regular church services that were held outside the compound area so that the ladies could join them. In 1946, however, Simelane and her mother were forced to leave home place in the country and come to live in Thushanang. Upon their arrival, they wanted to join the Church of the Nazarene but there was a problem.The pastor of the local church refused to give them a letter of commendation so they could become Nazarene members. He said that those miners were transient workers and would one day leave them. One Sunday a crowd of Nazarene men arrived and filled the church building of that pastor. At the close of the service Macamo confronted the pastor and told him, “We have come to fetch our sheep.” Freda and her mother received their commendation letters.

Macamo told Simelane that she was the answer to his prayers of many years. A local pastor was needed at Thushanang and Simelane was hesitant to move there. Finally in 1947 she agreed, realizing that God had indeed called her for this. She began visiting homes and trying to get a congregation started. The ladies helped build a temporary structure where one of the Christian men could live and where they could hold their services. Trying to begin a new church was very difficult. Everyone had his own church and people were not happy about coming to a residence to worship. Macamo, however, encouraged her and kept saying, “Persevere and live for Christ. God will give us people and we will build a church here.”

Then one day the inevitable happened. The men came to bid farewell. The mine was closing and they were being transferred to a distant one. Simelane was left alone with the few people. Meanwhile the Nazarene missionary superintendent, William C. Esselstyn, had suggested to Macamo that he resign his work, go home and return with his wife and family. The mission would arrange for a house for them there in Witbank, Thushanang Township, and they could pioneer a church there. One of the Johannesburg churches had promised to provide money to get a house and a bicycle for him.[2] It took many months to arrange for the necessary permits from the Mozambique government. Finally Macamo arrived home and began completing arrangements to move with his family immediately. Simelane and her small group of Christians waited and waited for him and as it turned out they waited in vain, yet Simelane continued to care for the little congregation there.

Toward the end of 1948 the missionary William Esselstyn arrived at Thushanang with tragic news. A few days before Macamo and his family were ready to leave home, he fell ill with cerebral malaria and died. Simelane and her little group wept, but there was good news too. The good news was that a new missionary couple, Clifford and Cassandra Church, were sent to live and work in Witbank. Simelane and her group of pioneers at Thushanang never forgot the words of Macamo before he left them, “Persevere and live for Christ. God will give us people and we will build a church here.[3] By 1950 a parsonage was built and in 1951 a fine church building was dedicated at Thushanang. It developed into one of the largest congregations in the Southwestern District.

In 1989 the Thushanang church was transferred to the Kwa-Ndebele District (now the Highveld District). Simelane continued to be active in the church and visited other churches in the district. She, together with the late Amos Masilela (a dedicated layman and member of the District Advisory Board), donated benches for the Dennilton Church. Working together, Simelane and Masilela started a church at Vosman near Witbankand. As of 2008 it was doing well.

In 2008 Janson Mashego, the District Superintendent, reported that, “Freda is very old and sick and cannot walk but uses a wheelchair. At the Global Church Centenary celebration in October this year we gathered at the Thushanang Church. Each local church expressed appreciation for the presence of Freda and a special offering was taken on her behalf. Together with her family and friends, they blessed us by singing a special song. Gogo (Grandmother) Simelane testified that she loves the Lord and the Church. We gave her a certificate in recognition of her long service in the church. She still attends Sunday School and the Sunday services.”[4]

Mashego, Janson, letter, November 20, 2008, transcript in possession of the author.