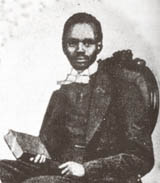 The Rev. Tiyo Soga (circa 1829-August 12, 1871) was the first ordained African minister in South Africa. He translated part of the Bible, and other works, into Xhosa.

He was born at Mgwali, about 30 miles east of the present King William’s Town, in Cape Province. His father, Soga, was one of the principal counselors of the Xhosa chiefs Ngqika and Sandile. The elder Soga was a polygamist, and Tiyo Soga was the seventh of thirty-nine children. After his birth, his mother became a Christian and sent him to mission school. At age 15 he was sent to Lovedale for further studies. When the principal of Lovedale, the Rev. William Govan, returned to Scotland during the War of the Axe in 1846, he took Soga with him.

A friend of Govan’s, John Henderson, became Soga’s benefactor, and supported him in his subsequent education. After two years’ study, Soga was baptized, and returned to South Africa to work as a catechist, evangelist, and interpreter. He resumed his education in Scotland again in 1851, studying to qualify as a minister at the University of Glasgow, and at the Theological Faculty of the United Presbyterian Church, Free Church of Scotland. He was ordained in December 1856. In February 1857, he married a Scotswoman, Janet Burnside, and then returned to South Africa.

From 1857-67 he ran a mission station among the Ngqika at Mgwali. In 1867 the Gcaleka chief Sarili requested Soga to start a mission among his people. Soga moved to Tutura (later Somerville) and built a church and a school. He died there four years later, aged 42, of a chronic throat ailment, exacerbated by overwork.

Along with his mission work, he wrote hymns and prayers, and translated from English to Xhosa. Critical of the first complete Xhosa Bible (translated by the Rev. J.W. Appleyard), he served on a board to produce a more scholarly version, and translated the greatest part of the New Testament himself. His translation of the first part of John Bunyan’s Pilgrim’s Progress was published in 1867. Soga also maintained an interest in Xhosa culture, and wrote articles for the English-Xhosa journal Indaba on Xhosa proverbs, customs and legends.

Soga had four sons and three daughters. All four sons were, like their father, educated in Scotland. William Anderson Soga became a missionary and a doctor; John Henderson Soga a missionary and historian; Allan Kirkland Soga a government official and journalist; and J.F. Soga a veterinarian noted for his work in the rinderpest epidemic of 1897.

Tiyo Soga’s education and religion separated him culturally from his people, but he strove to work for the good of his countrymen as he saw it. He was proud of being a Xhosa and was adamant in rejecting racialist characterizations of blacks. He and his wife suffered from discrimination by many whites due to their interracial marriage, and the uniqueness of his experience during his lifetime made his life lonely at times. Although in many ways he was able to overcome obstacles and live his life according to his values, his career (and those of his father and of his sons) also reflects the ironies and limits of African choices as white power grew in South Africa.