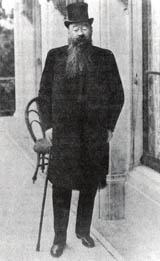 Born on the farm Rietfontein, near Winburg, Steyn grew up in an influential circle of Afrikaner aristocracy, his father being on the Executive Council of the OFS and a personal friend of the esteemed President Jan Brand.

After a few years’ education at Grey College in Bloemfontein Steyn assisted his father on their farm Zuurfontein, but Justice Buchanan persuaded Marthinus Steyn senior that the brilliant young Steyn should further his studies in the Netherlands. In 1877 he went to school in Deventer, the Netherlands, with a view to studying law at the University of Leyden. However, shortly before the examinations in 1879 he left for London, where he was admitted to the Inner Temple and called to the bar in 1882.

Returning to the OFS the following year he began a legal practice before being appointed Attorney General in 1889. Within seven months he became a judge and was appointed Chief Justice of the OFS in 1892. Five years earlier he had married Rachel Isabella (Tibbie) Fraser who affectionately supported her husband until his death almost forty years later.

On account of his personality and efficiency as a jurist, Steyn was approached to make himself available for the state presidency when ill health forced W.F. Reitz to resign in 1895. In contrast to his rival, John Fraser, who had once favored a federation with the (British) Cape Colony, Steyn envisaged closer cooperation between the two Boer Republics as a precursor to a united South African Republic under its own flag. The fear of British imperialism aroused by the Jameson Raid in 1895-96 ultimately determined the outcome of the election. The wave of nationalism that swept over the indignant Afrikaners ensured a landslide victory for Steyn.

Steyn continued the work of his predecessors, particularly of Brand, who had put the administration of the OFS on a sound footing. The Cape lost control of the OFS railway in 1897. Agricultural and educational facilities were improved and the first industrial schools established. Meanwhile President Kruger of the South African Republic could not reach agreement with the British High Commissioner, Milner on the franchise question, and the gathering of British forces on the republican borders was posing a threat to its independence. As “honest broker” between Kruger and Milner, Steyn tried his utmost to prevent war, but when it came on October 11, 1899, he characteristically involved himself heart and soul in the struggle, having cemented OFS ties with the SAR by means of a defensive and offensive pact in 1896.

As supreme head of the OFS forces, Steyn was occupied day and night, organizing the conduct of the war and visiting commandos on all fronts. After the British forces had overrun the country and the capital, Bloemfontein, had fallen on March 13, 1900, Steyn and the Government frequently moved about. They were often attached to a commando under the Commander-in-Chief, General Christiaan de Wet. Steyn, De Wet and the Reverend J.D. Kestell formed a formidable political, military and spiritual triumvirate. Although De Wet was three years Steyn’s senior, he regarded the President as his spiritual father. Together they formed the soul of the Afrikaner struggle, with Calvinism as the cornerstone of their outlook.

The successive British Commanders-in-Chief, Lords Roberts and Kitchener, believed that the capture of Steyn and De Wet would end the war. They never succeeded, although on two occasions Steyn only narrowly escaped. The untiring zeal with which he devoted himself to the preservation of independence seriously impaired his health. Although he had food poisoning which badly affected his eyes he nevertheless participated in the lengthy negotiations leading up to the peace agreement ending the Boer War on 31 May, 1902. Ill health prevented Steyn from signing the agreement.

After the war Steyn, accompanied by his wife, spent three years in Europe for medical treatment. His condition improved, but his eyelids and hand muscles never recovered fully.

In the economic, political and spiritual reconstruction of the Afrikaner in the aftermath of war, Steyn, albeit with weakened constitution, exercised great influence. He played an important advisory role behind the scenes at the National Convention (1908-09).

It was with general regret that Steyn, for reasons of health, could not accept the first premiership of the Union of South Africa in 1910.

Towards the end of his life the schism in Afrikaner ranks, caused by the World War I and the anti-British rebellion of 1914-15, was a source of profound unhappiness for Steyn. When premier Louis Botha had suppressed the rebellion and taken thousands of rebels, including General De Wet, prisoner, Steyn pleaded for leniency on their behalf. He did not, however, succeed in healing the breach. After his death in Bloemfontein on November 28, 1916, he was buried at the foot of the National Women’s Monument which he had unveiled three years earlier.