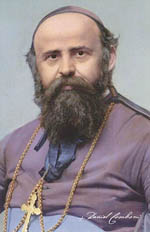 Some people would consider Daniel Comboni a failure when he died in Khartoum in 1881. The missionary priest had been working actively in or for Africa for over thirty years and had produced a continent-wide strategic document, Plan for the Regeneration of Africa, but had little to show for it. Over a hundred of the priests he recruited had died, most of his Sudan missions had failed, were struggling, or would soon be wiped out by the Muslim Mahdi. But a century later, the Combonians and Comboni Sisters were a strong missionary order in Africa and Latin America. Comboni ranks, with Venn, Libermann, and Lavigerie, as one of the handful of nineteenth-century figures claiming an encompassing missionary vision. His was a long-term strategy: “The missionaries will have to understand that they are stones hid under the earth, which will perhaps never come to light, but which will become part of the foundations of a vast, new building.”[1]

Born in a small town in Italy in 1831, Comboni always wanted to be a priest, developed a strong interest in Africa, and participated in an expedition to the south of the Sudan in 1857. Tropical illnesses decimated the small group and, as he lay dying, the father superior said, “If it should happen that only one of you be left, let him not give up or lose confidence …. Swear to me that you will not turn back.” “Africa or death,” Comboni answered. (He was the first mission’s only survivor and returned to Italy to recover his health.)

What was the best way to conduct missionary work in Africa? Comboni wrestled with the question, and in 1864 while in Rome he wrote Plan for the Regeneration of Africa. Facing the issues of climate and disease head on, as well as the problem of African students’ cultural adaptability to Europe, Comboni recommended that all European missionary orders should combine resources (this was in the heyday of the “scramble for Africa” and went against prevailing trends). Together they should build institutes, in favorable climactic zones throughout the continent. Here Europeans could come to teach and Africans to learn, not only as religious, but as lay teachers and craftspersons as well. When institute courses were completed, Africans and Europeans would then head to the interior together, but the Europeans would leave after a few years, to be replaced by other Europeans or not, depending on the need. “The regeneration of Africa by means of Africa itself seems to me the only possible way to Christianize the continent,” Comboni wrote.

As might be expected, the French refused to participate in such a plan, although Rome found it attractive and encouraged the Italian missionary, who then created the Cairo Institute, with schools for girls and boys and a hospital, as the first such launching pad. (It would be his only one). The Verona Sisters and Verona Fathers came a few years later, and by late 1871 Comboni returned to the Sudan to set up operations himself. He was named vicar apostolic of Central Africa in 1877.

The task Comboni faced in Africa in the 1870s was complicated by the slave trade. Slavery was big business in Central Africa, with large, well-armed caravans of recruiters who bribed Egyptian officials to let them move freely from the interior to port cities, where they sold their human cargo. Comboni fought hard against slavery, was given his own small army to combat the traffickers, closed the E1 0beid slave market, and hunted down some of the slave raiders. But he was only one person against an established industry.

With Comboni was the first African priest to work in Central Africa, Fr. Pius Hadrianus, a Benedictine. Soon another African priest, Fr. Antonio Dubale, was running a model village for freed slaves in El Obeid. A trained Nubian catechist, product of the Cairo Institute, was dispatched to work among this important southern Sudan ethnic group. The Nubians had a rich culture, were anti-Islamic, and were a logical target for mission work.

Comboni was a major figure in African religious life, training African missionaries, combating the slave trade, establishing a small number of solidly conceived mission stations in Sudan, and, most importantly, establishing the Verona Fathers and Sisters, which went through various reorganizations to emerge as the Comboni missionary congregations. Comboni was beatified in Rome on March 17, 1996.

Look on those who revere you, O God, on those who trust in your merciful one. Heal our sad divisions and our enmities, O Lord, help us to reject the ways of violence. Then shall dawn break over the desert; then shall your children frm North and South in Sudan sing your praises, Holy One whom we know by many names. Amen.