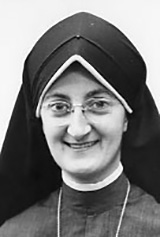 Anita Marie MacWilliam was born on December 3, 1930, in Montreal, Quebec, Canada. She made her First Profession of Vows with the Maryknoll Sisters in 1954, making Final Profession in 1960. She spent nearly all of her missionary service from 1961-2003 in Tanzania. First, she taught French in Mwanza. Then, since she had a masters degree in linguistics, Sr. Anita led the Maryknoll Language School, where she “developed the curriculum, trained the Tanzania teachers, produced, and revised the textbooks.” Some of her many other activities in Tanzania were as follows: serving as Head of Terminology and Translation at the Institute for Kiswahili Research at the University of Dar es Salaam, co-authoring an English-Swahili dictionary, serving as a founding member of the Women’s Research and Documentation Project and the Translation Association of Tanzania, and authoring many articles on linguistics, women, social justice, and multiculturality. Due to declining health, she relocated to North America in 2003, where she joined the Eden Community. She passed away on January 1, 2021.