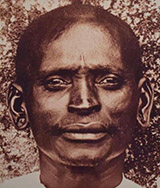 Yohana Malecela, a rainmaker turned pioneer missionary, was one of the prominent indigenous missionaries in Ugogo. He served at Buigiri for a long time, but had to move to Ihumwa to start new work there after serving with Danieli Mbogo for four years (1908-1912). A son of Maula, he was born at Mvumi, but neither oral nor archival sources give his date of birth. The account given by Ernest Doulton, probably late in 1901, and reported in the 1902 CMS annual report may help in determining his age. When Doulton moved from Mpwapwa to commence a new station at Buigiri on 22 August 1901, Yohana Malecela became his co-pioneer missionary and companion. In 1902, he described Yohana, saying, “About five years ago he was a poor degraded Heathen, but now, by the grace of God, he is rejoicing in Christ as his own personal Saviour and keeper.”[1] This description, though loaded with pejorative phrases–common in those days, particularly when referring to the followers of traditional religions–gives us a clue about Yohana Malecela’s age. He must have been an adult around 1896.

This is further confirmed by family sources. One such source suggests that Yohana Malecela migrated from Mvumi when he was twenty years of age (or perhaps a little older) and went to live at Msamalo village near Kikombo railway station to learn the art of rainmaking from Mubumba, the local rainmaker.[2] Though Malecela’s exact date of birth may not be known, he was probably older than Andrea Mwaka, and was therefore born around mid-1860s.

After acquiring rainmaking skills, he practiced with Mubumba for a few years before moving to Mpwapwa to live with his paternal uncle. Shortly afterwards, the Germans established an administrative centre at Mpwapwa early in 1889.[3] Yohana Malecela was a single man at this time. But a few years later, his uncle died, and he inherited his widow who later gave birth to a son fathered by Malecela.[4] The couple named their son “Mudachi” (Kiswahili word, meaning “German citizen”). [5]

Yohana Malecela’s nickname “Kuhodanga,” meaning “to destroy” [6], is a name associated with his art of rainmaking, and of being a traditional “destructive” medicine practitioner before his conversion to Christianity. He became converted as a result of the work of Andrea Lungwa. [7] After resisting the message preached to him by Lungwa for years, two events particularly led to Yohana joining the mission.

Whilst at Mpwapwa, he and his friend were arrested by a German official, and were forced to carry a box of ammunition under escort. His friend was shot dead as he and Malecela tried to escape their captor. Malecela survived and ran away. On another occasion, again with a friend, on a night time mission to visit their girlfriends, his friend was bitten by a poisonous snake as they walked down a narrow path surrounded with tall grass and died shortly afterwards. [8]

After these two “lucky” escapes, and given that he had been in contact with the mission through Lungwa for a long time, he finally agreed to enrol as an inquirer at Mpwapwa. He was now convinced it was God who saved him from two dangerous situations during which both of his friends died. [9] To demonstrate that he had now begun a new life, he divorced his first wife (his paternal uncle’s widow) and took a second wife named Marita. [10] He also stopped using his nickname “Kuhodanga.”

It was common in the CMS mission (as in other missions) for a convert to be engaged in mission work before being baptized. Yohana Malecela was one of the people who began their Christian vocation in similar circumstances. It is thought that his baptism took place in 1896. [11] As stated earlier, he moved to Buigiri where he and Doulton became pioneer missionaries. At Buigiri, Yohana took initiatives that demonstrated his commitment to God’s work. He made possible the recruitment of junior staff through contributions from his own monthly allowance. No one was better placed in 1902, to praise him for this act than Doulton:

About four months ago Yakobo (of Mpwapwa) expressed the desire to give up the whole of his time to the Lord’s work and come here as a probationary agent. Yohana and Isaka, thinking he would be a useful helper in the work, and hearing that there was no provision for another worker, quite of their own accord and without any suggestion whatever from me, offered to give Rs. 3 per month towards Yakobo’s support. I thankfully accepted the offer, and by a small addition to this myself, Yakobo was able to come here and enter upon the work. I ought to say also that Yohana was then contributing R. 1 per month towards Isaka’s support, and so he is now giving Rs. 3 per month out of his allowance of Rs. 10.[12]

“Quite of their own accord, and without any suggestion whatever from me” is the phrase that emphasizes sufficiently, the fact that indigenous teachers and missionaries in Ugogo often took initiatives that involved self-denial. This act of self-denial impressed Bishop Peel and his wife during the bishop’s second visit to Tanzania (from Mombasa, Kenya). Mrs. Peel clearly rejoiced in the commitment shown by Yohana and his colleague. Before she and her husband concluded their tour, she wrote to a friend in England and described, in more or less the same way, what Doulton shared in the quote above:

We were very pleased with the earnestness and self-denial shown by the teachers there. Yohana, the senior teacher, receives ten rupees a month (13s. 4d.), and has nine members of his family to support, and offered to pay one rupee every month out of his salary to help to provide a second teacher, and both these give two rupees again per month towards the support of a third teacher, who was willing to come for five rupees [6s. 8d.] a month only. [13]

By the time the tour had ended–after which Bishop Peel wrote his reflections on the 1902/1903 [14] visit to Tanzania, Yakobo, “the third teacher,” had indeed been employed as indicated in Doulton’s account above. As was stated above (in relation to Andrea Mwaka’s salary), at this time, a rupee was equivalent to just over eight pence. Therefore, Yohana Malecela was receiving about 80 pence a month. The verdict of Mrs. Peel at the time was that this was far too little for a teacher who supported a family of nine, hence the emphasis that his giving was an act of self-denial. Perhaps this was part of the reason why in 1905, the executive committee passed a resolution allowing Yohana Malecela to receive maintenance allowance from the mission fund. [15]

Yohana Malecela was not only able to make sacrificial donations to enlarge the workforce at Buigiri and its outstations. He was an able leader. In 1906, he was the principal teacher (quasi-pastor), and was assisted by junior members of staff like Yakobo and Isaka. Like other leading indigenous teachers and missionaries, Yohana Malecela’s work was even better during Doulton’s absence. In September 1905 when the Maji Maji uprising broke out, all CMS missionaries in the CMS mission, including Doulton, were forced to take refuge at Kiboariani for their own safety. They returned to their stations in May 1906. If this was not long enough for Malecela’s leadership skills to be tested and commended, Doulton went on holiday in England and returned at the end of November. The mission’s 1906 report, to which Doulton contributed, noted that:

It is pleasing to note that during this time, Yohana has proved faithful to his trust, and the work in its different branches has been well maintained on the station and some attention has also been given to three or four of the outlying districts. We are of the opinion that after receiving some further training, Yohana Malecela will in the near future qualify himself to take charge of some district. [16]

During this time of Doulton’s absence, “the school on the station was well kept up, several people from outside the station came forward and began to receive instruction. Those who were already under instruction showed sincerity and entered a more advanced class. Nine had been admitted to the catechumenate.” [17] Yohana Malecela’s leadership gifts and exemplary life couldn’t be emphasized enough. In 1908, Doulton wrote, “I cannot speak too highly of his faithfulness and example to the flock over which he was placed, or of his true witness for Christ by life and word.” [18] His appointment to take charge of “some district” took place too. In 1912, he became a pioneer missionary at Ihumwa village, and kept his title of quasi-pastor. It is interesting to note that while at Ihumwa, three of his four sons-Samweli, Daudi and Petro–were among the junior teachers he supervised, each with his own small outstation away from Ihumwa village itself. [19]

During his time as teacher and missionary at Ihumwa, he managed to convert a former chief. The missionary skills of Yohana Malecela shone here particularly because the chief to whom he preached was also the rainmaker for his area, and kept rain-stones. Prior to his conversion, the former chief had been “hard and indifferent”[20]–a description befitting some chiefs at this time who opposed the introduction of mission Christianity. Most chiefs were often quick to encourage their people to attend mission schools. However, many of them did not convert to mission Christianity. Yohana Malecela should take the credit for the conversion of someone who was opposed to Christianity all the way until his conversion.

In 1914, he was among the first thirteen senior teachers to train at Kongwa college. As other leading teachers and indigenous missionaries in Ugogo, he (and his sons) were arrested by the Germans early in 1916 when war intensified. [21] On his release in September along with others, he returned to Ihumwa where he continued to serve as a lay minister until old age and illness defeated him. He died at Mvumi mission on 4 August 1942 [22] and, like Andrea Mwaka who had died seven years earlier, he was buried there.

Yohana is remembered in Ugogo as faithful and dedicated servant of God. Unlike most of his contemporaries, he served as a lay person until his death. However one of his sons, Petro, and a number of his grandsons such as Naftali Petro Lusinde Malecela, and Stefano Daudi Malecela are well-known clergy in the Diocese of Central Tanzania who first served as catechists for years. His other well known grandsons–Job Petro Lusinde and John Samwel Malecela–are senior politicians and have held government positions in Tanzania since 1961. The former held various ministerial posts between 1964-1985, and has served as an ambassador in different countries. The latter has also served in diplomatic and ministerial positions, and was prime minister for several years in the second phase government (1985-1995). He is currently the vice-chairman of the CCM-the governing party in Tanzania. Therefore, whether in church or government, the legacy of Yohana Malecela continues in Ugogo and Tanzania as a whole.

This article is reproduced, with permission, from “The Growth of Christianity in Ugogo and Ukaguru (Central Tanzania): A Socio-Historical Analysis of the Role of Indigenous Agents 1876-1933,” unpublished Ph.D. thesis (University of Edinburgh, 1999) by Raphael Mwita Akiri.