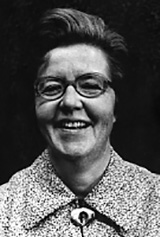 Gertrude Maley was born on November 1, 1926, in New York City. Taking her first vows with the Maryknoll Sisters in 1948, she was sent to Tanzania in 1950, where she first taught at a primary school in Kowak for Aspirants to the new Congregation, Immaculate Heart Sisters of Africa (today known as the Immaculate Heart Training School in Makoko). After spending some time in studies in Belguim, she returned to Africa and was later assigned to Kampala, Uganda, where she served as Vice Director at Gaba Pastoral Institute from 1968-1974. In 1979, her work took her again to Tanzania, where she served as head of the Catechetical department in Musoma Diocese. She concluded her time of service in Africa by teaching theology and catechetics in Nairobi, Kenya. Sister Gertrude passed away on June 20, 2013.